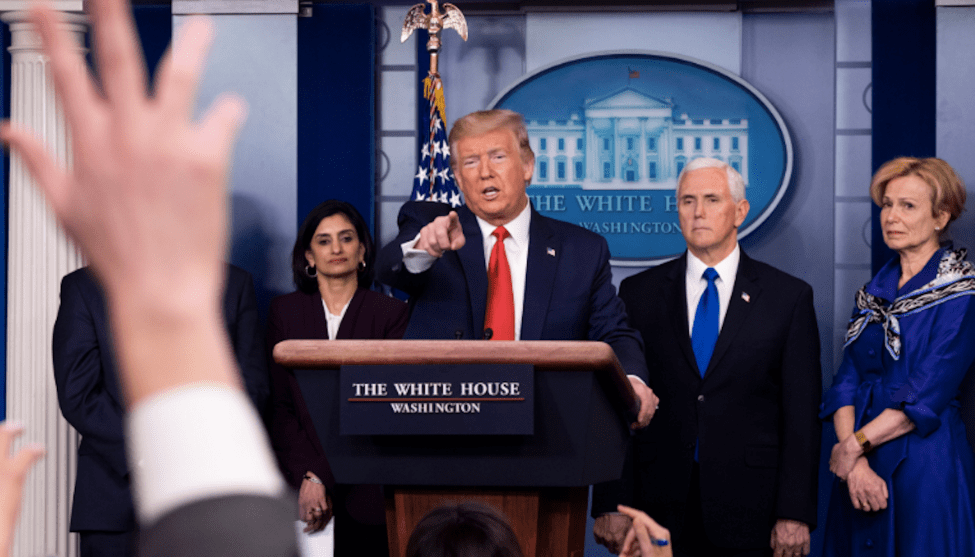 After weeks of dismissing the novel coronavirus as a liberal hoax designed to undermine his reelection bid, and falsely claiming that the United States was overprepared to tackle the surge of outbreaks, President Donald Trump appears to have finally come to grips with the devastating realities of the pandemic. But that hasn’t put an end to the president’s relentless efforts to blame anyone but himself and his administration for the public health crisis.

With cases in all 50 states and at least 127 deaths in the US from COVID-19, it now seems that Trump and his allies have decided to shift some of the blame for its rapid spread on millennials—the age group usually defined by those born between 1981 and 1996—claiming that young people have been endangering the wider population by minimizing the threat of the virus.

“The truth is I see a lot of people just dismissing this thing, that this is ‘No worse than the flu, and I’m going to continue to live my life,’ especially these people and younger generations,” a medical contributor told the hosts of Fox & Friends on Wednesday. “But the truth is that this may be the same as the flu, but we will not know that until next year. Right now, this is more severe than the flu. We have a higher death rate.”

This is a breathtaking statement coming from the network that only last week branded the coronavirus a Democratic “impeachment scam.” As for Trump’s own attempts to downplay the virus as nothing more than the flu—or the “regular flu” as he claimed in his televised address exactly one week ago—they were never mentioned. Instead, hours later, during another White House press conference on the pandemic, Dr. Deborah Birx, Trump’s coronavirus response coordinator, echoed the same blame game.

A Fox News medical contributor says "these millennials and these younger generations" are wrong for dismissing coronavirus as "no worse than the flu," as several of her Fox News colleagues did for weeks. pic.twitter.com/mfaxQHt3CK

“I’m going to call on that group…we need them to be healthy,” she told reporters. “We cannot have these large gatherings that continue to occur throughout the country for people who are off work to then be socializing in large groups and spreading the virus. You have the potential then to spread it to someone who does have a condition that none of us knew about and cause them to have a disastrous outcome.”

She had nothing to say about Republican lawmakers and Fox News personalities repeatedly mocking social distancing measures last week.

While Birx failed to offer any evidence to back the claim that millennials are overwhelmingly ignoring social distancing rules more than any other age group, the condescension in her claim was clear. So, too, was its likely broader intention. Whether or not there’s a national crisis, wagging the finger at millennials is something that unites boomers across the political spectrum. And for Trump’s base, who, like the president, has become desperate to vilify others for the current disaster, it’s red meat.

But condescending gaslighting isn’t the only tactic Team Trump is relying on. Like a classic narc, 38-year-old Ivanka Trump on Tuesday chimed in on the team effort with an odd appeal to her generational peers. The call to action came one day after she drew widespread derision for offering tone-deaf advice to American families struggling amid coronavirus.

Fellow millennials, we must do our part to slow the spread of #coronavirus!