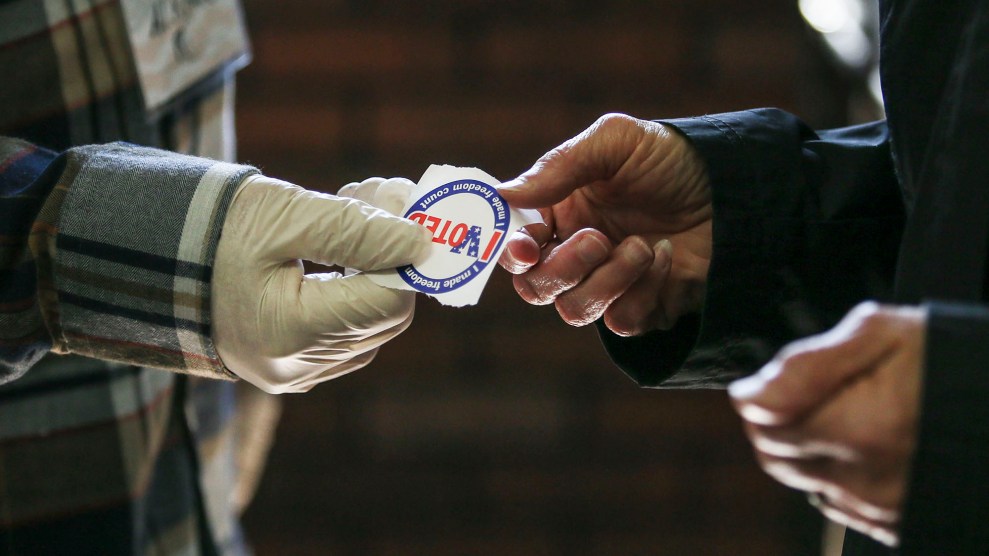 The coronavirus is wreaking havoc on the United States’ primary election season, and the commotion is prompting politicians, candidates, and voting rights advocates to raise a seemingly simple solution: a quick nationwide turn to voting by mail.

But the reality is that modifying a state’s election system to properly conduct a vote-by-mail election is complicated and takes time—perhaps more time than exists between now and the time when general election candidates are typically selected.

While some states already conduct all-mail elections, enacting those systems required resolving many thorny legal and logistical issues. Oregon was the first to go all mail in 1998 and automatically send postal ballots to all registered voters ahead of Election Day, followed by Washington in 2011, Colorado in 2013, and Hawaii and Utah in 2019.

Last week, when Louisiana became the first state to reschedule a primary in the face of the coronavirus by postponing its election from April 4 until June 20, the secretary of state’s office fielded criticism for not moving to an all vote by mail election for the new date. “Logistically, we just don’t have enough time to get the ballots printed, the envelopes, the scanning equipment—that would need to be certified before we could use it,” press secretary Tyler Brey told Mother Jones. “Quite frankly, we didn’t want to have the Louisiana voters be a guinea pig for something that we were putting together so last minute and so outside of our expertise.”

“The real challenge here is that we want to make sure that the election is conducted with utmost integrity of the process, and that doesn’t mean rushing anything,” said Tammy Patrick, an election administration expert at the Bipartisan Policy Center and a former election official in Maricopa County, Arizona, which is home to Phoenix and is one of the country’s largest voting jurisdictions. “In order to do it well and service the population as best as one can, we need it to be a very thoughtful process.”

Elections in the US are typically run at the county level, with heavy interaction, coordination, and funding through state officials and state laws, along with additional coordination with federal officials. In the best of times, election administrators face a range of complicated and, at times, contentious issues to work through when tinkering with election policy. Many changes require state legislative action.

In 33 states, and in the District of Columbia, existing laws allow for “no-excuse” absentee voting, which means that while voters don’t automatically receive mailed ballots, any registrant can request one. In the remaining states an “excuse” is needed, such as a voter being out of town, on jury duty, having a physical disability, or some other reason why they cannot go to a polling place to cast their ballot.

Patrick said some states are well suited for a switch to full vote-by-mail, such as Arizona, where a no-excuse policy means most people already cast absentee ballots. But other states, like Louisiana, would have to scale up an entire system that would take time, money, and the negotiation of logistical issues and legal requirements.

One set of questions are purely technical: Can a state secure enough paper to print ballots, and of a high enough quality that scanners can properly function? What about enough envelopes, and how will they be designed? What about proper equipment to fold ballots and stuff hundreds of thousands or millions of them into envelopes in a reasonable amount of time? Are voter rolls accurate enough to ensure every registered voter actually gets a ballot?

Then there are complex legal questions that represent some of the biggest fights in election policy over the years and that states have only resolved after bitter political arguments: How many days after an election can a ballot arrive and still be counted? Should it be legal for canvassers to go door-to-door to collect voters’ ballots? At what date after the election must results be certified and all counting be stopped?

A federal bill announced by Sen. Ron Wyden (D-Ore.) last week would provide funding and require all states to offer a vote-by-mail option this year, or to allow for the dropping off of paper ballots, if 25 percent of states declared a state of emergency—a threshold that had already been met when he announced the proposal. Wyden, a longtime advocate of vote-by-mail, has introduced another bill with Sen. Amy Klobuchar (D-Minn.), that would expand early in-person voting and no-excuse absentee and mail voting in all states, and allow voters who did not receive an absentee ballot to use print-at-home ballots that currently are only available to military and overseas voters.

In Illinois, which forged ahead with its scheduled primary election on Tuesday, a debate between officials over postponing the election and switching to all mail voting turned heated. Jim Allen, spokesman for the Chicago Board of Elections, said the city had urged Gov. J.B. Pritzker to prohibit in-person voting and go to vote-by-mail, and on Tuesday described “conducting an election in the midst of a global pandemic” to Chicago reporters as “a curse.” The governor’s chief of staff, Anne Caprara, tweeted that the governor moved ahead with the election in part out of at attempt at “avoiding a legal crisis.” Jordan Abudayyeh, the governor’s press secretary, wrote in an email to Mother Jones that he “cannot unilaterally cancel or delay an election…No one is saying this is a perfect solution. We have no perfect solutions at the moment. We only have least bad solutions.”

Part of the debate in Illinois centered over the risk the coronavirus presented to elderly poll workers, a concern also cited by Louisiana officials in postponing their primary.

Patrick says mail in systems only go part way toward resolving such concerns. “Every plan relies on people,” said said. “You know who processes the vote-by-mail ballots in large jurisdictions? Hundreds of temporary workers, and many of them are the same population as the poll workers.”

Still, Patrick says a switch to vote-by-mail can be accomplished with adequate resources—the most important of which may be time.