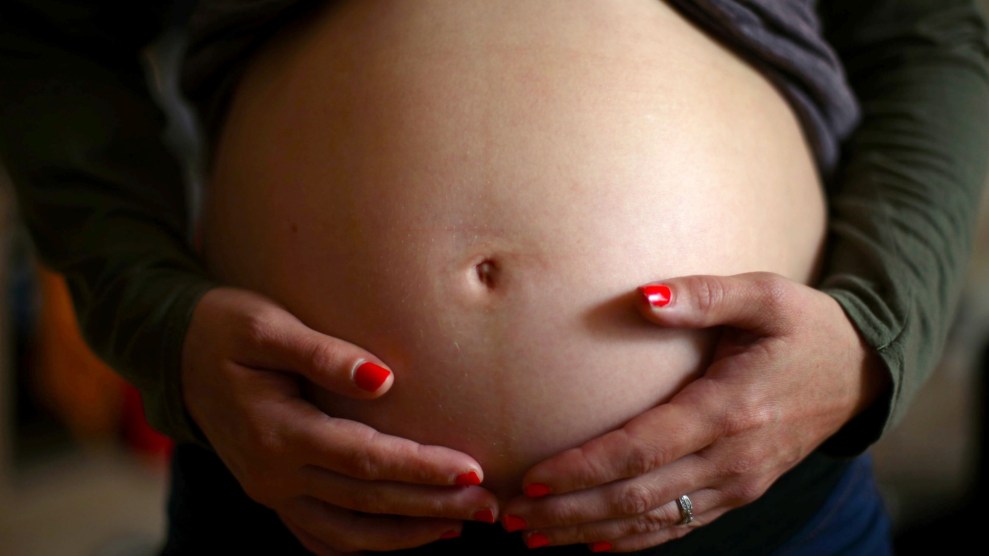 For the past couple weeks, Talia Parks, who is 16 weeks pregnant, and her husband, David, have been cooped up in their townhouse in Milcreek, Washington, under a voluntary quarantine. David, who works at Microsoft, began displaying symptoms related to the coronavirus two weeks ago after working in an office building where two cases of the virus were confirmed. He’s come down with a cough and fever but when we first spoke last week, he had not been able to get tested. “I am worried not only for my husband, but also what this could mean for my fetus,” says Parks. ” I try not to worry too much but I’ve heard that people that had bad cases of the flu have miscarriages, stillbirths…I can’t not think about it.”

The coronavirus has been declared a pandemic by the World Health Organization. Approximately 5,002 people in the United States have tested positive for the coronavirus, which causes COVID-19, and the death toll now stands at 93. There has been a great deal of attention focused on the most vulnerable populations: people over 65 and those with underlying health conditions like diabetes, heart disease, and respiratory problems. But there is scant information about whether pregnant women, new mothers, or infants fall into the category of high-risk populations.

Emily Vraga, an associate professor at Hubbard School of Journalism and Mass Communication at the University of Minnesota, specializes in misinformation related to health, science, and politics. She explains that when pregnant women search for reliable information to learn how they could be impacted by the virus, the results can be “deeply unsatisfying.”

In 2016, during the Zika outbreak, the World Health Organization was forced to put out a list that debunked a number of misleading claims that had appeared. Many of them were targeted at pregnant women, since the virus was known to cause birth anomalies in children born to mothers who were infected. While some of the misinformation was more benign, many of the claims, such as the one that the vaccine to prevent Zika could cause specific “birth defects,” could have seriously damaged public health efforts to contain the disease.

Vraga worries that a lack of authoritative information could result in a similar contagion of misinformation. “Unfortunately the medical community just doesn’t have enough information to give strong guidance and that creates a really big gap,” she says. “My concern is that if people can’t find the information they’re looking for through official websites, they’re going to turn to others and that’s where misinformation really spreads.”

Parks works as an administrative assistant at a fishing company in Kirkland, Washington, which has become the epicenter of the largest outbreak of the virus in the United States. There have been 63 confirmed cases of the coronavirus and over 23 deaths at the Life Care Center nursing home in Kirkland. Her office has since closed until April, but Parks had already been told to stay home because of her husband’s symptoms. “My panic mode was already over the top,” Parks says, “but when I found out my area was the hardest hit it’s just been scary.”

“My panic mode was already over the top, but when I found out my area was the hardest hit —it’s just been scary.”

When I first spoke with Parks, she had been told her husband did not meet the guidelines for testing despite showing symptoms and having been in proximity to individuals who tested positive for the virus. Since then, they’ve been told that he does meet the guidelines for testing, but Parks says she’s afraid to bring him to any of the now overcrowded hospitals in their area, where she worries either one of them could become infected with the coronavirus. The couple has adopted a wait-and-see attitude, and improvised an internal quarantine for David while he’s been symptomatic. They’ve been told to keep at least six feet apart, so they separated their townhome into two distinct living areas, with her upstairs and her husband in the living room. “It’s been awful,” Parks says. “I just want to hang out with him, watch Westworld, and YouTube, and instead I just find myself shouting down the stairs to see how he’s doing.”

The isolation itself can be a problem for pregnant women, says Dr. Joia Crear-Perry, an OBGYN and the president of National Birth Equity Collaborative, an organization focused on black maternal and infant health. Studies have shown that social deprivation is associated with adverse maternal outcomes. “The hard part is we have been encouraging people to not be isolated when you’re pregnant and the need for connectedness,” says Crear-Perry, “and so finding new ways to connect while doing social isolation is important.”

Vraga says that people should continue to turn to trusted medical resources such as the Centers for Disease Control and Prevention and the American College of Obstetricians and Gynecologists, as well as their providers. But even then, both national organizations are repeating the advice on hand-washing and avoiding people who are sick, but offer no specific guidelines for pregnant women to follow during this epidemic.

“You should still plan to have your prenatal visits and other reproductive health needs throughout the course of your pregnancy,” writes Courtney Benedict, a certified nurse-midwife and director of medical standards implementation at Planned Parenthood. But, she adds, if you are experiencing symptoms of the virus, you should call your health care provider before trying to go in for care.

Initial studies on babies born to mothers with the coronavirus originating in China, which saw the first case in November, have suggested that the disease does not pass from pregnant women to newborns and has not been found in breastmilk. Women who contracted the virus in their second trimester did not experience “critical maternal illnesses” as had been seen in pregnant women who had contracted previous coronaviruses such as SARS or MERS. Adverse outcomes such as preterm births have been reported for infants born to women with the virus, but there isn’t enough information to determine whether those results were caused by the virus or other factors. Data on women who contract the virus in their first trimester is not available, although high fevers during early pregnancy, one of the main symptoms, have been known to cause birth defects.

Then there’s the question of where to give birth during a pandemic, when hospitals could be overrun with contagious patients. “This pandemic really stresses the capacity of our health care system,” says Crear-Perry. Most hospitals outside of major cities aren’t set up to treat severely ill women giving birth. She urges people intending to give birth in hospitals, birthing centers, or at home to ask their provider about their ability to safely deliver babies—including whether the locations have enough ventilators and have had cases of the virus, and whether the person doing home birth has been exposed to the virus. Moving to home births for everyone is probably not an option, she says. The home birth world is overburdened. There aren’t enough people doing that either. It’s not like we have this great system.”

Remaining calm and informed during this pandemic is important for everyone but especially for those who are pregnant. Stress is already a major health concern for pregnant women and can cause adverse outcomes such as miscarriages or hypertension. “The truth is their lives are already stressful,” , Crear-Perry says. “They are often taking care of other family members and themselves, and this human being inside of them and, all that comes with that.” Whether stress relief comes from reading a book, meditating, or chatting with friends—with appropriate social distancing—Crear-Perry encourages pregnant women to find ways to take time for themselves without feeling selfish.

Lucy Schulson, a primary care physician in Boston, whose first child is due in May, says that being a doctor has helped reduce some her anxieties about the coronavirus. “There is a lot that is unknown,” she says, “but it is a little easier for me to digest the data because I am a physician.”

She washes her hands regularly and follows basic guidelines but is more troubled about what could happen once the baby arrives. Information about the virus’s impact after birth is virtually nonexistent. She’s especially worried because her husband is an intensive care physician, which means he’s likely to come in contact with people who have been infected.

“It’s understandable that pregnant women would be concerned about exposure to the virus and any negative effect it could have on their health and the health of their fetus,” says Christopher Zahn, vice president of practice advisories for the American College of Obstetricians and Gynecologists. “However, it is critical to note that at this time, for the general public in the United States, the immediate health risk from COVID-19 is considered low.”

Parks says she has continued to feel healthy, outside of the occasional bouts of morning sickness, and that her husband has even started to improve, but her fears about the virus remain. “I think the worst part,” she says, “is really just not knowing.”