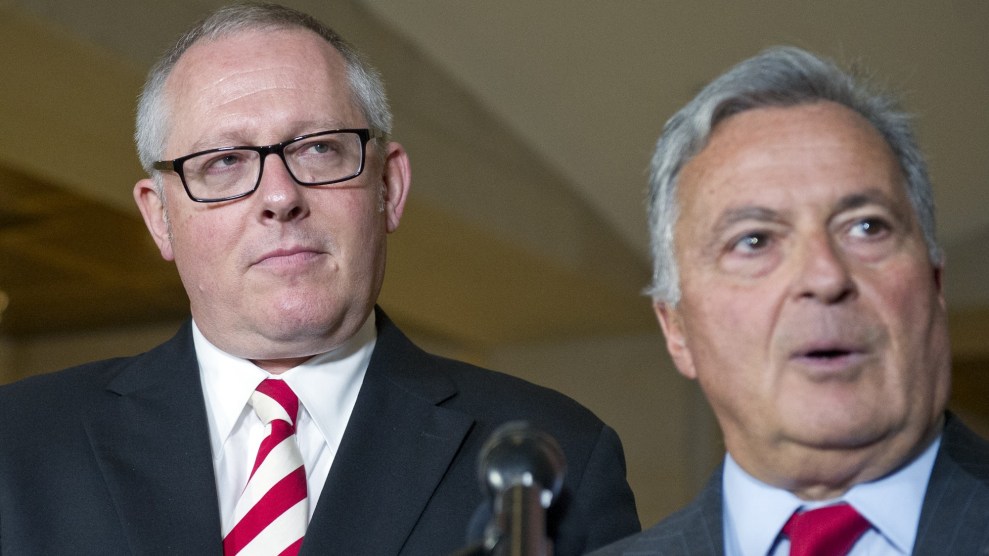 As the Department of Health and Human Services battles the coronavirus outbreak, the Trump administration has placed Michael Caputo, a Roger Stone ally who played a part in the Trump-Russia scandal, in charge of the agency’s messaging. A longtime Republican operative who was ousted from a job on Trump’s 2016 campaign, Caputo recently worked to boost discredited claims alleging that Ukraine, not Russia, meddled in the 2016 election.

Caputo’s hiring reportedly represents an effort by Donald Trump to rein in Health and Human Services Secretary Alex Azar, who Trump loyalists believe has worked to protect his own reputation by casting blame for the administration’s bungled response to the pandemic on the president. But Caputo’s hiring also highlights the extent to which Washington has moved past the Russia scandal and Trump’s impeachment.

Less than two years ago, Caputo appeared to be in hot water. In June 2018, the Washington Post reported that he and Stone had met in 2016 with Henry Oknyansky, a Russian expat living in Florida, who wanted to sell damaging information about Hillary Clinton. Caputo, in text messages with Stone the Post obtained, referred to Oknyansky as “the Russian.” Though no deal was reached, news of the meeting seemed to contradict claims both Stone and Caputo had made in testimony to the House Intelligence Committee. Both men denied any contact with Russians during the 2016 campaign.

“I spent my time in front of the committee detailing the fact that I had no contact with Russians, that I never heard of anyone with the Trump campaign talking with Russians, that I was never asked questions about my time in Russia, that I never even spoke to anyone about Russia, that I never heard the word ‘Russia,’ and we did not use Russian dressing,” Caputo told reporters July 2017 after testifying before the panel. He quickly amended his testimony after the Post story.

Caputo and Stone then responded to the revelations by alleging that Oknyansky was an FBI informant attempting to entrap them, an allegation not supported by any available evidence.

Stone was later convicted of making false statements to the House Intelligence Committee about other matters and sentenced to 40 months in prison. Stone’s sentence is delayed while a federal judge reviews his motion for a new trial. In the interim, Stone has promoted a conspiracy theory that Microsoft founder Bill Gates may have helped create coronavirus as part of a plot to implant microchips in people’s heads.

Caputo vocally denounced special counsel Robert Mueller’s investigation as unfounded and acted as a steadfast supporter for Stone. He raised money for Stone’s legal defense and was ejected from the courtroom on November 15 for turning his back on the the jury in a show of contempt after they convicted Stone. Caputo was never charged with wrongdoing himself, but Mueller’s report does note that he and Oknyansky gave contradicting accounts of their 2016 meeting.

Caputo has lengthy experience in former Soviet states. From 1995 to 1999 he advised former Russian President Boris Yeltsin. In 2004, after he wrote an op-ed attacking Russian billionaire Boris Berezovsky, Caputo says he received death threats. As a result, he says he armed himself with a .40-caliber Glock and moved onto a tugboat off the Florida coast, where he kept a white parrot named August West as company.

Last year, Caputo, along with other figures in Trump’s orbit, turned his focus to Ukraine. He says he travelled there last August to try to bolster the theory that Ukrainians interfered in 2016 election to help Clinton. He subsequently wrote a book, titled The Ukraine Hoax: How Decades of Corruption in the Former Soviet Republic Led to Trump’s Phony Impeachment, which pushes discredited allegations, including claims that former Vice President Joe Biden intervened in Ukrainian affairs to help his son, Hunter. Caputo produced a documentary offering similar allegations that aired in January on the rabidly pro-Trump One America News. Giuliani starred in a separate OAN series which pushed similar claims based his own trip to Ukraine.

Caputo is a political adviser and lobbyist, with a roster of former clients that includes controversial former New York gubernatorial candidate Carl Paladino and Somalia’s current president. Through his public relations firm, Zeppelin Communications, he registered in January under the Foreign Agents Registration Act to work for a Ukrainian think tank, the Institute for Democracy and Development. Caputo said he helped arrange meetings for a delegation of 10 to 15 Ukrainian “campaign professionals” with members of Congress in early March. According to the documents Caputo filed, the Ukrainian group was expected to include Iryna Venediktova, an ally of Ukrainian President Volodymyr Zelenskyy, who at the time headed Ukraine’s State Bureau of Investigation.

On March 17, Zelensky appointed Venediktova the new prosecutor-general of Ukraine, replacing Ruslan Ryaboshapka, a prosecutor general who had instigated an anti-corruption push. Venediktova’s appointment was part of a larger shake up that anti-corruption activists fear suggests a shift by Zelensky away from reform. “It feels that his agenda is being built by either very non-competent forces or very pro-oligarch and pro-Russian forces,” Daria Kaleniuk, head of Ukraine’s Anti-Corruption Action Center, told The Washington Post.

Venediktova’s planned involvement with the trip Caputo helped arrange is notable because Trump’s impeachment focused on his efforts to pressure Zelensky to have the prosecutor general’s office announce investigations aimed at helping Trump. In Trump’s infamous July 25 call with the Ukrainian president, he urged Zelensky to investigate Biden and a bizarre theory that a hacked Democratic National Committee server is secretly held in Ukraine. Zelensky responded with an assurance that he would soon appoint a prosecutor who would be “100 percent my person, my candidate.”

Caputo declined to comment in response to questions about his Ukrainian work, including whether he has had any contact with Venediktova. It appears she did not join the think tank delegation. In social media posts about the trip, the organization does not mention the prosecutor. The think tank did not respond to an inquiry.

But the group does note that Caputo had a message for the Ukrainians. In a March 1 meeting, “he stressed that despite any attempts of unauthorized influence, no one should conduct Ukraine policy instead of [the country itself],” the think tank said on Facebook. “According to him, neither the EU nor the United States can interfere with Ukraine’s internal and foreign policy.” Caputo seems not to have been intentionally referring to Trump’s interference in Ukrainian politics when he said this.

Now he will deploy his messaging expertise for HHS.