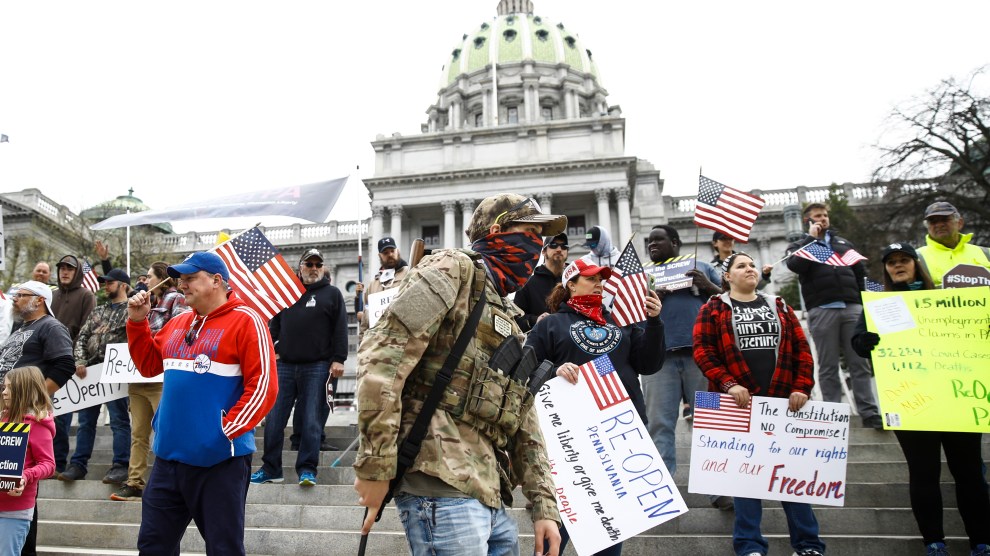 I caught up with Michael Murphy late on Sunday from his home in Jacksonville, Florida, but it wasn’t easy: he hadn’t been able to answer his phone for 24 hours. “I had to turn it off,” he said. “I’m also getting spearphishing emails every 30 seconds.”

The angry callers had gotten Murphy’s name from one of the dozens of domain registries that he had set up since Friday night. That day, a friend who lived in North Carolina noticed that right-wingers in that state and across the country were setting up rallies attacking business closures put in place to slow the spread of the coronavirus.

“I bought these names to try to stop the insanity, basically. And it just turned to insanity.”

Murphy, who said he’s staunchly opposed to and frustrated by the protests because of the risks they pose in accelerating the spread of the coronavirus, and his friend realized that the organizers, which turned out to include a small group of pro-gun advocates helping coordinate the campaign, were using a simple state-based abbreviation pattern to register websites promoting the protests.

They came up with a plan. Murphy snapped up domains for every still available iteration of reopenAL.com, reopenAK.com, reopenAR.com, and so forth, that hadn’t already been purchased, along with every domain he could for variations like liberateWV.com, liberateWY.com, and liberateWI.com. The idea was to preempt any further such purchases by people genuinely seeking to organize protests.

“I realized all these fringe guys are gonna get a hold of these websites, So I went out and bought ‘em up that night,” he told me. The financial burden of thwarting fringe-right groups? “It cost me about four grand,” Murphy said. “I don’t have the money quite frankly. I was just trying to do something good. I’m in massive credit debt to do this.”

Murphy said that he recognized that his plan isn’t foolproof. While similar domains have already been obtained and still remain up for purchase, he thinks keeping fringe-right wingers from the one’s he purchased has made a difference. He said he believes such short concise domain names are important in search rankings. “Names are really powerful. That’s why people pay millions for certain domains,” he said.

After buying the URLs, things were initially quiet. But on Saturday night a Reddit post detailing information about the domain registrations went viral. While the message didn’t directly identify Murphy, it gave instructions on how to find his name alongside speculation that he must be running an anti-lockdown astroturf campaign—even though Murphy’s intentions were the exact opposite. On Twitter, people doxxed him, posting his address and home number.

“I bought these names to try to stop the insanity, basically. And it just turned to insanity,” he said. He felt forced to unplug his phone, and his inbox exploded with messages attacking him—and potentially trying to hack him.

Almost all of the hate was coming from liberals, many of them egged on by presuming posts from amateur Twitter sleuths who mistakenly pegged Murphy as a conservative organizing protests in defiance of nationwide stay at home orders. None of the hate was from conservatives angry at him for keeping them from using the domains themselves.

By Saturday morning, he had decided to shell out more to modify the domain listing information, futilely attempting to hide his links to the URLs. But it was too late. “I woke up this morning and my Facebook page was in Sanskrit or something,” he said, attributing the change to a malicious troll.

Over the last week, the crossfire over the protests that Murphy stepped into has become a massive issue. Right-wing protesters in Texas, Michigan, Ohio, and elsewhere have organized rallies to demand reopenings in defiance of local stay at home orders. While the number of protestors at the events have been relatively small, especially compared with widespread polling showing Americans are worried about the threat of rolling back restrictions credited with saving lives, the rallies have still caught the attention of national media. The demonstrations echo Trump’s public advocacy pushing for reopenings as soon as possible, which epidemiologists warn will have grave impacts.

“Liberals think I’m trying to support all these nut cases. I’m trying to stop them,” Murphy said, describing himself as an “old hippie,” who runs an “ecological, environmentally friendly businesses”—an architectural salvage and antiques retailer. While it qualifies as an essential business under local law and is open, profits have come to a standstill, since “no one is coming in.” He’s been working on applications for federal small business loans authorized in response to the pandemic.

“I’m not really political, but I guess I’m more progressive than anything else,” he said. “I don’t really know what to do honestly, all these liberals are saying we’re going to boycott your store. They have it all wrong.”

While some of the URLs and Facebook events that have been set up by genuine proponents of the rallies exhibit signs of having been coordinated by long-standing gun rights advocates, most domains with the “reopen” and “liberate” URLs are owned by Murphy, who says he doesn’t even want them.

“I’m trying to have some rational organization take them over so that they can do something with them,” he explained, saying that he hopes to recoup his costs. “That was my whole point in doing this originally. I’d just really like to use these sites for dispensing factual scientific information and I’d like to pass them to someone who wants to do that, because I think they’d be useful.”