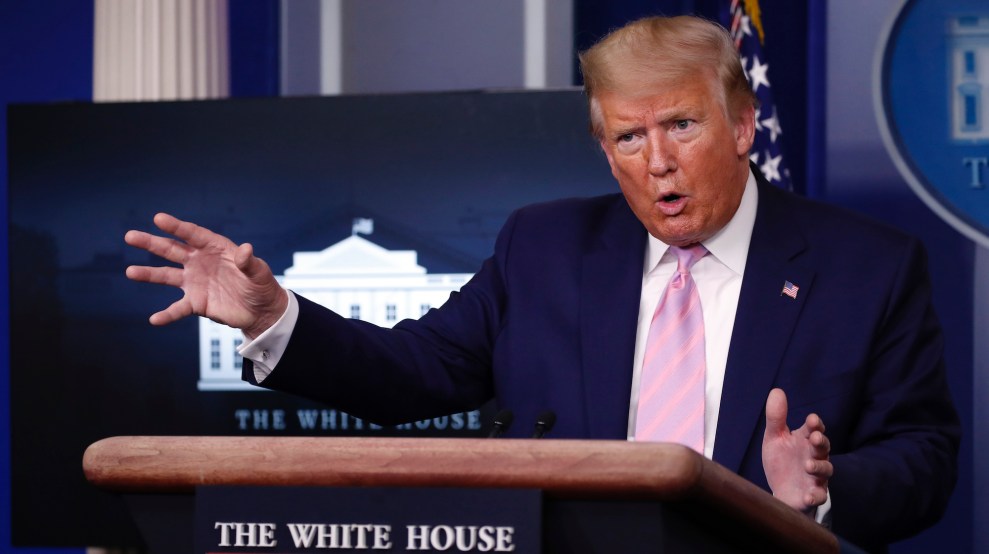 Donald Trump’s company has asked its biggest lender, German financial giant Deutsche Bank, for a break on repaying some of its loans. The Trump Organization has also asked Palm Beach County for similar leeway on rent payments the president owes on one of his Florida golf courses. The New York Times reports that Trump Org executives made the requests recently, citing the global financial crisis caused by the COVID-19 pandemic.

The pandemic has been devastating for much of the American economy, particularly the travel industry. As much as three quarters of Trump’s revenue in recent years has come from his travel-related businesses. Nearly all of Trump’s properties are shuttered; some are barely operating, with limited offerings. In all, the Trump Organization has laid off or furloughed more than 1,000 employees. The shutdowns may be costing the president as much as $680,000 a day in revenue.

When Trump became president, he refused to divest from his business empire. At the time, ethics experts worried about the potential for a major conflict-of-interest should the sitting U.S. president ever need to ask one of his lenders or business partners for any change to their existing deals—the exact scenario now playing out.

Deutsche Bank has always been at the top of the list of potential conflicts between the president and one of his business partners. Long after other Wall Street banks decided to stop lending to Trump over his past business failures, Trump developed a relationship with the German bank’s private wealth management division, which currently holds four Trump loans. In addition to lending him $160 million in 2015 to finance the opening of his luxury DC hotel, it made two loans, totaling $125 million, to bankroll his company’s purchase and redevelopment of the Doral golf course in Miami. The bank also loaned Trump $69 million to refinance debt related to his Chicago tower. While the Trump Organization has always maintained that its level of debt is not particularly high compared with the value of its properties, it nevertheless must continue to pay its loans back, which is difficult to do when no money is coming in.

According to the Times, executives at the Trump Organization approached Deutsche Bank about possibly postponing payments on at least some of the loans. Eric Trump, the president’s middle son, told the Times that this is no different from what any other business is doing:

That may be true, but the loans that Trump has with Deutsche Bank are personally guaranteed—meaning that if the president is unable to repay them, Deutsche Bank would be able to come after the personal assets of the president of the United States to settle the debt. We’re looking at the possibility of a face-off between the most powerful politician on Earth and a German bank that has struggled financially in recent years and run into trouble with U.S. law enforcement and bank regulators—all in the shadow of a global crisis. This is pretty much the worst-case scenario posited by ethics experts when Trump took office and refused to sell off his assets. .

The Times also reported that Trump executives approached Palm Beach County officials for a break on rent that the president owes the county. Trump doesn’t actually own the land underneath his Trump International Golf Course in West Palm Beach, one of his favorite courses to visit on his frequent presidential golf outings; he just rents it from the county.

It’s unclear if Deutsche Bank or Palm Beach County will give the president any leeway, and discussions remain preliminary, the Times reports.