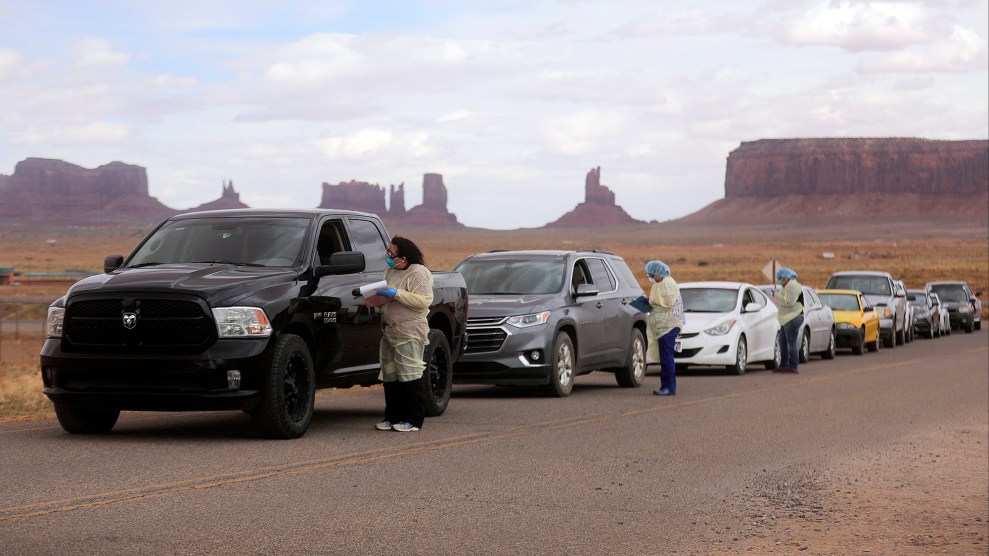 When the Indian Health Service doctors said they’d have to keep him overnight, Ray Belin tore the IVs out of his arm and fled the emergency room. His granddaughter Judith Solomon found him in the hospital’s waiting room, waving his cane to fend off doctors as they tried to get him back in bed. “He didn’t feel safe,” Solomon says of Belin, who’d been diagnosed with pneumonia after resisting his family’s first attempts to take him in for care. “He got really mad and started calling them ‘horse doctors’ because he thought they weren’t qualified doctors, just students who came to practice on us, not caring about what kind of care they provided,” Solomon says. Around the same time, her grandmother was diagnosed with diabetes. She refused to take “the white man’s medications” and ultimately perished from the disease.

That all took place in the 1990s, but Solomon, whose family has resided on Navajo Nation lands for more than two centuries, says this tendency—a deeply entrenched mistrust of Western medicine and health care providers—has enabled the coronavirus to rapidly spread across their reservation.

With a population of 350,000 and territory encompassing over 27,000 square miles, the Navajo Nation is the largest Indigenous reservation in the country, bigger than West Virginia and nine other US states. Today, the rural community has more per-capita COVID-19 infections than any place outside of New York and New Jersey. In April, its rate of infection was 10 times higher than that of Arizona, which encircles most of the Nation. Since the first cases cropped up on the reservation more than one month ago, more than 2,373 people have been infected, and the death toll stands at 73—higher than those of 11 states. “The need for the Navajo is far greater than any other tribe I have seen,” says Rep. Deb Haaland (D-N.M.), whose district includes part of the reservation.

The reasons for it expose how history and long-standing inequalities are shaping the way the disease attacks.

In 1864, the Navajo endured their own version of the infamous Trail of Tears, the “Long Walk,” when the US Army subjected them to more than 50 forced marches away from their homelands. Many Navajo died of pneumonia along the way, and there is a well-known local legend that the US Army distributed blankets infected with smallpox to expedite the genocide, something that European colonists intentionally did at least once. Later, in the 1950s, after the reservation had become the hub of the country’s booming uranium industry, the US Public Health Service studied Navajo uranium miners without informing them or gaining consent. To track the effects of radiation over time, scientists who knew about the risks of exposure did not inform the Navajo of known precautionary measures and only distributed safety pamphlets in English. Navajo miners soon began dying of lung cancer and respiratory diseases at astounding rates, while Christian missionaries were taking Navajo children from their families to violently assimilate them at boarding schools.

These traumas remain “critical to contemporary Navajos’ sense of identity as a people,” anthropologist Thomas Csordas wrote in a Medical Anthropology Quarterly article about the tribe.

So when the Navajo Times reported that the reservation’s outbreak likely began at the March 9 rally of a local chapter of an evangelical church, Solomon says, “everybody’s mindset immediately went right back to” the church’s role in colonizing the Navajo. Rumors began to swirl that white Christians had brought the virus, perhaps even intentionally, creating confusion about how the virus spreads and suspicion of information from the outside. “It brought back the mistrust, and a lot of bad memories. My parents, like other Diné people, became wary of the whole situation,” says Solomon, who prefers the term Diné as the Navajos’ traditional name for themselves. Even COVID-19 prevention measures felt like a form of colonialism.

And as the virus became a growing concern across the country, awareness developed slowly on the reservation. Early news of the outbreak largely came through English-speaking media, which many Navajo either don’t read or don’t trust. Many elders on the reservation only speak the Navajo language, and even those who understand English prefer to receive information from particular local sources. “If they watch the news, it’s not really registering,” says Solomon. “But when they turn into KTNN,” a popular Navajo radio station, “they hear the medicine woman or the Navajo Nation president talking about it, and then it sinks in. When they’re talking about it in Navajo, in our language, it has more of an impact. I see that with my own parents.”

Indian Health Service workers, school nurses, and community center officials could have done more to inform Navajo people about the importance of social distancing before their officials were forced to implement widespread closures and intense weekend-long curfews, says Solomon. She only began to hear KTNN feature local leaders on hand-washing, social distancing, and other mitigation measures around the start of April, long after such advisories became widespread elsewhere. The Navajo Department of Health first imposed stay-at-home orders on March 20. Some Navajo bragged about “rebelling” against these orders, since historically, white government officials “always tried to come in here and force things on us,” says Solomon.

(Rep. Haaland, who is sponsoring a bill that would improve tribes’ access to CDC funding and programs, is also pushing for local media outlets to receive emergency funding as part of the next coronavirus relief package, as small newspapers face what one journalism expert called an “extinction-level crisis.” Haaland’s office says that “equal access to accurate information and culturally relevant news will save lives.”)

Of course, mistrust is not the only reason the coronavirus has ripped through Navajo reservation—other factors, like lack of adequate housing and clean water, high rates of poverty, and low education also contributed. “Tribes have been chronically neglected and underfunded for decades and decades, and with this coronavirus, we’re seeing it’s clear that the US needs to live up to its trust responsibilities,” says Haaland.

Take water. Decades of uranium mining on Navajo lands contributed to the well-documented pollution of drinking water in the area. Despite the Environmental Protection Agency’s remediation efforts, 40 percent of Navajo Nation still lacks reliable access to clean water. “If you’re having to haul water from a well many miles down a dirt road, and bring it back to water the animals, and also use it for washing and cooking and things like that, it’s really hard to wash your hands with soap and water for 20 seconds,” says Daniel Derksen, a public health professor who directs the University of Arizona’s Center for Rural Health.

In 2018, the US Commission on Civil Rights published the “Broken Promises Report” to highlight this chronic neglect of Native American communities, who the US federal government promised to support in various ways through the hundreds of treaties it signed and ratified with Indigenous nations in exchange for taking their lands. Identifying severe inequities in basic infrastructure, housing, education, health care, and economic needs, the Commission concluded that federal institutions were failing to fulfill the trust responsibilities legally enshrined in treaties, and recommended Congress implement a major spending package as well as “steady, equitable, and non-discretionary funding directly to tribal nations.”

Neglect has had a death toll since long before the coronavirus, and not just for the Navajo: A study by the National Institutes of Health found that Native Americans and Alaska Natives died of the 2009 H1N1 flu at four times the rates of all other racial and ethnic groups combined.

Yet while reparations for Indigenous nations remain far from a legislative priority, even the COVID-19 crisis response has left them out to dry. While the CARES Act, the largest economic stimulus package in US history, allocated more than $8 billion for tribal communities and health institutions, Navajo Nation President Jonathan Nez has decried the “very slow” pace at which those dollars are flowing toward hard-hit communities like his, thanks to a lengthy grant application process with “heavy reporting requirements” and the possibility that billions will be unjustly diverted to for-profit Alaska Native corporations. (The Navajo and 10 other tribes are suing to stop this.)

“We are using our own dollars to help out these emergencies,” says Nez, adding that tribal coffers will be badly depleted by the loss of local business and tourism revenue. To obtain basic protective gear like gloves, masks, and face shields, “We are bidding against everyone, even against state governments,” says Nez, “and it seems like the person with the most money gets the resources. That’s just what this country is doing.”

Even with proper gear and information, many Navajo households will struggle to implement social distancing measures, says Derksen, given the local tendency for many generations of a family to live together under one roof. While intergenerational housing may be a preferred cultural practice, expanding food access on reservations is one way to improve health outcomes and mitigate future pandemics. Currently, many Navajo people must travel up to 50 miles to get groceries and supplies, bringing them into contact with regional COVID-19 hot spots such as Gallup, New Mexico, where Solomon says she’s lately been subject to renewed racism from non-Native locals.

“My grandpa used to say, ‘when you’ve been out in the real world, you come back and see everything is just as you left it,'” says Solomon, who lived in California and Washington for 13 years before returning to the Navajo Nation. “There’s no real progress. It’s heart wrenching to see your people struggling, especially when there’s this pandemic going on that’s so great and so huge, and our people don’t even know what to do with it. They’re so scared. They’re so misinformed.”

But in yet another display of Indigenous resilience, she’s been working with her sister and niece to purchase food and supplies from distant stores, assembling baskets for elders and families with children so they don’t have to leave home. “I recently had to go to four or five Family Dollars to get what I needed,” says Solomon. “But I always have a van full of canned goods and toilet paper. My aunt just called and said she was down to three rolls and couldn’t find any, so I came over and brought some.”

For the Navajo, the same insular focus and close-knit family structures that create challenges during a pandemic can also be part of the solution. “I come from a long line of Navajo warriors,” says Solomon. “I moved back here to take care of my parents and that’s turned into a long list of people I’m caring for. I fight for my people.”