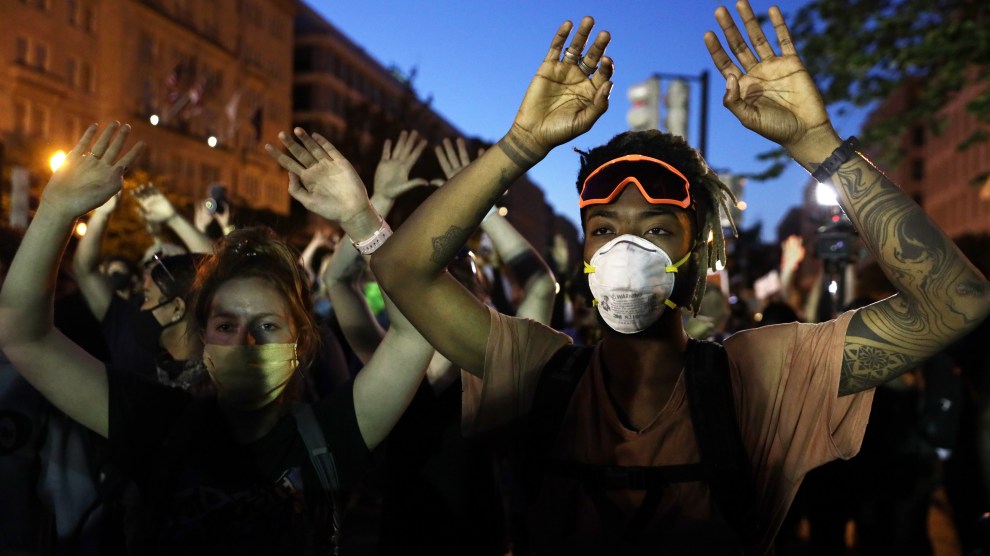 Demonstrators in Washington, DC on Sunday.Photo by Alex Wong/Getty Images

In the late hours of Sunday and early Monday morning, as Washington, DC, was in the throes of massive protests and police used teargas, rubber bullets, and what appeared to be flashbangs on demonstrators drawn out by the death of George Floyd, something confusing started happening online: the hashtag #DCBlackout started going viral on Twitter, accompanied by similar posts on Facebook and Reddit, claiming that sometime at around 1 am, internet service had gone down throughout the district, blocking people from using the internet or posting what was happening on social media.

There is almost no evidence that suggests that this actually happened. Mother Jones reporters in DC who were using the internet at the time didn’t notice outages, and no media outlets noticed or confirmed this either.

A lot of people are asking me about a possible #dcblackout. I’ve been out near the White House since 4 am and haven’t experienced any outage. My friend and colleague @ABC7HeatherGraf was covering the DC protests last night and was posting multiple updates. pic.twitter.com/ag1cuY3MOD

Regardless, the claim spread. Just as quickly as #DCBlackout was catching on, another wave of accounts started to push back. Except instead of being good samaritan accounts trying to push back on disinformation, they appeared to be apart of a coordinated network of accounts working at once to spread the exact same message:

“Yeah…… as someone seeing #dcblackout trending, who lives and works in the DC metro area, and who has friends telecommuting into DC rn….. this hashtag looks like misinformation. ‘No social media from DC’ because we were asleep. Stop scaring people. #dcsafe,” dozens of accounts posted.

As he was watching all of this play out, Darius Kazemi, an independent researcher and programmer with years of experience researching social media and bots, knew he was seeing something weird.

“It seems like an operation to sow confusion by stoking the fire on both sides,” Kazemi, a former fellow at the Mozilla Foundation, explained on the phone. While Kazemi caveated that there was still a lot he wasn’t sure of and that he didn’t have proof for any of his suspicions about motivations, he observed that many of the accounts, both those pushing #DCBlackout and refuting it, were engaged in what seemed to be coordinated behavior by all posting the same thing.

He noted that some of the accounts appeared to have been potentially hacked, because they either posted the #dcblackout hashtag but quickly deleted it, or posted accompanying messages saying that they didn’t mean to post about the supposed blackout and that they weren’t sure how they had. Kazemi also said that many participating accounts appeared to have been created very recently—within the last month or so.

Besides the fact there was almost certainly no telecommunications or internet blackout last night, it’s unclear exactly what happened and who was pushing the disinformation.

However, Twitter confirmed that at least some of Kazemi’s suspicions were correct. A company spokesperson told Mother Jones over email that the campaign had been sustained with scam accounts, and that it is “taking action proactively on any coordinated attempts to disrupt the public conversation around this issue” and is “actively investigating the hashtag #dcblackout and during that process have already suspended hundreds of spammy accounts that Tweeted using the hashtag.”