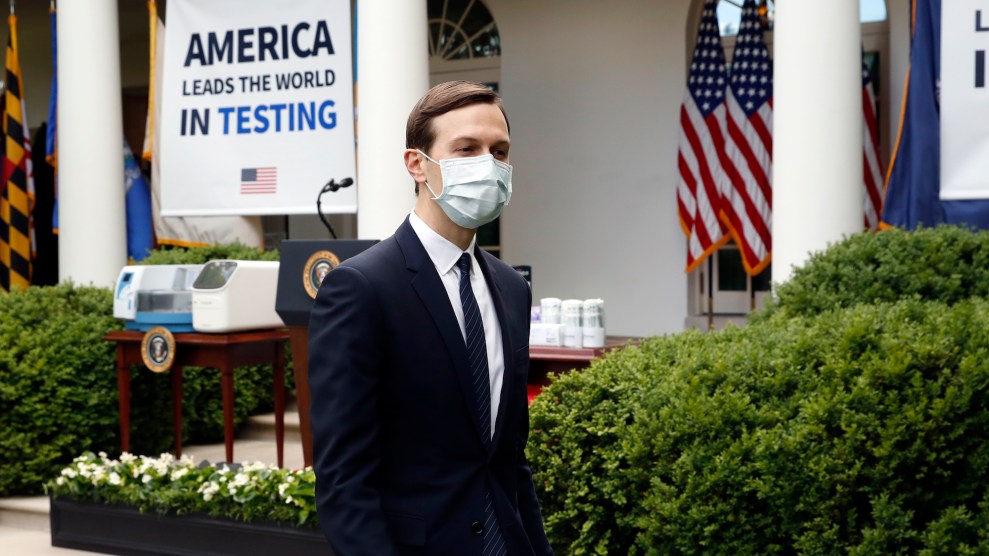 Wearing a mask, White House adviser Jared Kushner leaves after President Donald Trump spoke about the coronavirus during a press briefing in the Rose Garden of the White House.Alex Brandon/AP

Earlier this spring, when the country was facing massive shortages of personal protective equipment and other medical supplies needed to combat the novel coronavirus pandemic, the Trump administration announced with great fanfare something called Project Airbridge. The effort, spearheaded by Trump’s son-in-law Jared Kushner, provided taxpayer funded cargo flights from Asia to expedite the delivery of PPE by private companies in the US. Various administration officials have touted Project Airbridge as an example of the administration’s quick response to the supply shortages, but critics complained that despite at least $91 million worth of subsidized cargo flights for big corporations, it was little more than a PR effort that never made a meaningful dent in the PPE shortage.

New information released today by the House Committee on Oversight and Reform provides a more detailed look at the administration’s response to the pandemic-related medical supply shortages. Over the past several months, the committee interviewed executives at the nation’s largest medical supply companies and their trade organization, HIDA, about Project Airbridge and the White House Supply Chain Task Force, largely because members could not get any information out of the administration. “Committee staff contacted these companies because the Trump Administration has not been transparent about the actions of the Task Force or Project Airbridge,” writes Chairwoman Carolyn Maloney (D-NY).

As I reported in May:

[A]fter many glowing PR hits, the administration decided to put an end to Project Airbridge as members of Congress and the media started demanding answers about how the supplies were being distributed, who received them, and whether the White House was making distribution decisions based on politics rather than public health. On April 21, 10 Democratic senators, led by Elizabeth Warren, asked the inspector general of the Department of Health and Human Services to investigate the project. “The novelty and complexity of this arrangement demands heightened scrutiny and transparency,” they wrote in a letter. “However, the administration’s implementation of Project Airbridge has been completely opaque.”

The Oversight committee’s report penetrated some of that opacity with a number of revelations from private industry that show how inadequate the administration’s response has been from the very beginning of the pandemic. Among its findings :

At the time Project Airbridge got off the ground, states, local hospitals, and governments were bidding against each other and driving up the prices of scarce PPE exponentially. Despite the urgency, the administration put no meaningful restrictions on the prices private companies could charge for the supplies flown in on subsidized flights, nor did it require them to report back to the government what they charged for the goods. The administration also offered no industry-wide guidance for companies that weren’t part of Project Airbridge “aside from everyone watching the news,” FEMA officials told the committee. The administration left companies to figure out where the most urgent needs were on their own.

A Private Sector Supply Chain Coalition “came out of nowhere” to try to seize control of the process, and had “direct communications with FEMA.”

HIDA representatives told the committee that sometime in March, a Private Sector Supply Chain Coalition “came out of nowhere” to try to seize control of the process, and had “direct communications with FEMA.” The coalition, which took over the coordination between the administration and the supply companies, was headed by Dennis Robb, the CEO of HealthTrust Europe, a subsidiary of HCA, the huge American hospital chain. According to the report, Robb, a volunteer, headed up daily calls with major distributors about procurement issues, and he used his private email to conduct government business. Attempts by Mother Jones to reach Robb for comment were unsuccessful.

The most intriguing revelation from the report is that the Trump administration pressured private medical supply companies it was working with to buy PPE at inflated prices from a Chinese electric car and battery company called BYD, which stands for Build Your Dreams. BYD is subsidized by the Chinese government, and the committee noted that last year, Congress banned federal funds from going to electric buses made by state-owned enterprises, including BDY. Company officials told the House committee that negotiations over the BYD purchase went on for weeks, but ultimately, they refused to sign the deal pressed by the administration. During the negotiations, according to the report, BYD tried repeatedly but failed to win certification from the National Institute for Occupational Safety and Health (NIOSH) to manufacture N95 respirator masks, which can be used in medical settings. NIOSH finally approved BYD’s application on June 8 this year and is now selling masks in the US to states including California, which has a $1 billion contract with the company for 150 million masks.

The committee notes that FEMA still has refused to turn over a single document it has requested as part of its oversight of the administration’s pandemic response. Its investigation is ongoing.

After this story published, a FEMA spokesperson emailed Mother Jones a comment, saying, “We worked with Governors from every state and territory to provide PPE that otherwise would not have been available in our fight against this disease. Project Airbridge completed 249 flights and brought in the following supplies from overseas manufacturers to the U.S. and into private sector supply chains to save lives in our nation: Over 5.3 million N95 respirators, 937 million gloves, 122 million surgical masks, 63.3 million gowns, 2.6 million face/eye shields, 2.4 million thermometers, 1.4 million coveralls, 370,000 oxygen masks and 109,000 stethoscopes. Every governor was given this data on a weekly basis.”