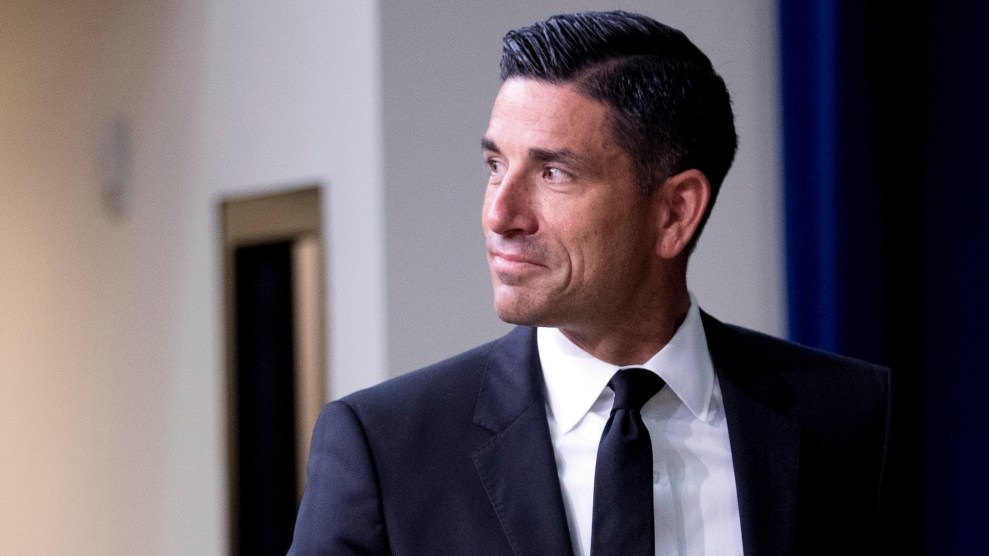 Back in November, I explained how Chad Wolf, the acting Homeland Security secretary President Trump now fawns over, got his job. The short answer was incompetence:

In April, President Donald Trump got rid of Homeland Security Secretary Kirstjen Nielsen after finding her to be weak and ineffectual. A half-year later, Nielsen’s replacement is on his way out, and Trump’s apparent pick to replace him is…Nielsen’s former chief of staff.

Trump almost certainly doesn’t want Chad Wolf, a mostly unknown former lobbyist in charge of DHS’s policy office, running the Cabinet department most responsible for carrying out his attacks on immigration. The problem is that he doesn’t have much of a choice. He’s been so negligent about appointing people to run DHS that there’s no one to his liking in the line of succession. Nine of the 11 top DHS positions are vacant. If Trump had bothered to nominate people and pushed the Senate to confirm them, he could have chosen among them for acting DHS chief.

But the rules require him to pick someone already confirmed by the Senate, in the line of succession, or having served at least 90 days under the previous secretary. His top hardline picks don’t meet those criteria, and so he’s stuck with Wolf.

Fast forward eight months, and Trump does not feel at all stuck with Wolf. At a recent appearance with Mexican President Andrés Manuel López Obrador, Trump made a point of singling out his new friend, saying, “What a great job you’re doing, Chad.”

If incompetence explains how Wolf got his jump, sycophancy explains how he’s kept it. Wolf oversees the Federal Emergency Management Agency, whose responsibilities you’d think he might be preoccupied with during a global pandemic. But Wolf works for a man whose strategy is to ignore mounting death tolls in favor of attacking the political left. So for July 4, with COVID-19 cases skyrocketing, Wolf wrote a piece in the conservative Federalist decrying the “violent mob” targeting statues of George Washington, one of America’s “exceptionally virtuous” Founding Fathers. It read like inane right-wing virtue signaling, except that it was written by an acting Cabinet secretary on a day when 589 Americans died from COVID-19.

More ominously, Wolf concluded by stating that “we will leverage every tool and authority in our arsenal” to protect some statues. Two weeks later, Wolf’s public affairs office put out a press release attacking a “violent mob” in Portland, Oregon. The release included the phrase “violent anarchists” on 70 separate occasions.

Trump is not much of a reader, so Wolf traveled to Portland as unidentified federal agents picked people off the streets. While he was there, he role-played as General Patton.

Our men and women in uniform are patriots. We will never surrender to violent extremists on my watch. pic.twitter.com/kG8w8kyw9E

And he stared down an enemy that was not quite Rommel—namely, some graffiti.

Here is what I saw in Portland yesterday. pic.twitter.com/B0xvTTYvIj

He concluded his Twitter thread with melodrama, writing, “We will prevail.” For reference, below is the area of the midsized American city within which Wolf is talking about vanquishing unarmed protesters with Border Patrol tactical response teams.

Interesting how some folks portray all of Portland based on scenes from *incredibly* small portions of the city. This is Portland, Oregon. The circles are generous boundaries for what you see on cable news and put forth by bad-faith attention seekers. pic.twitter.com/HKo0yoflQ6

Wolf’s Twitter profile photo shows him in sunglasses and a headset as he does his very best to look very tough. From all the posturing, you might think the Homeland Security secretary had spent some time in law enforcement. In reality, he was an airport security bureaucrat who became a lobbyist. But he’s learned an important lesson: When your boss became president by pretending to be a brilliant dealmaker on television, image is all that counts.