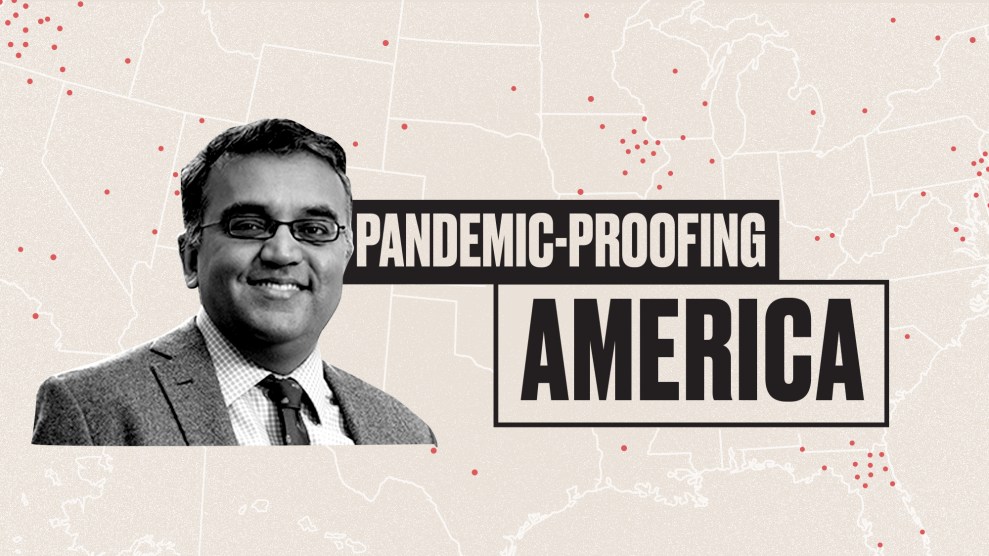 As the world grapples with the devastation of the coronavirus, one thing is clear: The United States simply wasn’t prepared. Despite repeated warnings from infectious disease experts over the years, we lacked essential beds, equipment, and medication; public health advice was confusing, and our leadership offered no clear direction while sidelining credible health professionals and institutions. Infectious disease experts agree that it’s only a matter of time before the next pandemic hits, and that could be even deadlier. So how do we fix what COVID has shown was broken? In this Mother Jones series, we’re asking experts from a wide range of disciplines one question: What are the most important steps we can take to make sure we’re better prepared next time around?

Ashish Jha is the director of the Harvard Global Health Institute. Even before the coronavirus pandemic, he was preoccupied with our ailing health care system, writing extensively on quality improvement, cost efficiency, and the impact of policies on patient outcomes. Since the start of the pandemic, Jha has emerged as a policy leader in all aspects of the delivery of care at the hospital, local, and national level. He was one of the first public health experts to call for a national quarantine. Jha thinks a lot about the problem of infectious disease; in fact he teaches a course called Lessons From Ebola: Preventing the Next Pandemic. I caught up with him while he was sheltering in his home in Massachusetts.

On Trump-proofing our infectious disease infrastructure: About a year and a half ago, there was a report by the global pandemic monitoring board, which assessed every country’s preparedness. If I remember, America was in the top three. So it’s kind of interesting to think that we were identified as one of the most prepared in the world. And I will argue that among high income countries, certainly, our response may be the very worst in the world. That contrast is interesting—it’s making me think, why did things go so badly? When we say we were one of the most prepared, it doesn’t actually mean that there aren’t lots of things we should be doing better. But part of the failure here really was political. No matter what level of data infrastructure, lab capacity, and testing and tracing infrastructure you put in, if there is a top-down failure from the federal government, it’s very hard for a country to recover. Political incompetence can undermine always.

I think it raises a question: Could you build an infrastructure that could be Trump-proof? You could have a future leader who is just as incompetent, so could you build a system that would survive poor political leadership? I just think of it like, wow, the whole system, which was among the best in the world, kind of completely collapsed. And that to me is very scary.

On what we need to invest in: Let’s get rid of the political angle for a second and just talk about the kinds of things that would be important. I think one area that really hurt us, especially on the issues around health equity, is the lack of high-quality data on what was happening in the pandemic. There’s a bunch of reasons why that data infrastructure didn’t exist, but mostly because public health agencies have terrible data systems. One area I would certainly make a lot of investment in is improving the data capacity of public health agencies across America—because we couldn’t track number of hospitalizations, number of deaths, let alone do it by race and ethnicity and income. That would have signaled much earlier on that we were seeing this very large disproportionate effect on the African American community. It took us way too long to sort that out. We made a very massive investment through the High Tech Act to get doctors and hospitals wired up on electronic health records, and I’ve generally been pretty supportive of that investment. But if none of that data flows into public health agencies, then it’s a huge problem during a public health crisis.

Second, I think I’ve heard Robert Redfield [director of the Centers for Disease Control and Prevention] say, we had contact tracing, like 6000 contact tracers. That’s massively inadequate. We need much more of a public health workforce that can be quickly called up, people who’ve been trained. Then you have to think about how you use them. It’s almost like the reserves in the military: People who get training on regular jobs, do the regular stuff. And then, in the middle of a public health crisis, they get called up and can be part of a large public health army or workforce. I would really build up a public health reserve corps.

The third idea: It’s interesting to me that of the billions of dollars that NIH gives out overall, infectious diseases in general has been a pretty small part. People make the argument, and rightly so, that cancer kills more people, heart disease kills more people. Well, one of the few things that can kill millions of people in short order is a pandemic from a virus. And it’s the area where we invest among the least. I would put a lot more money into research on viruses and antiviral therapies. The key is, you don’t know which virus is coming next. We’ve always assumed that the next big pandemic was going to be the influenza pandemic. We did not think there would be a Coronavirus pandemic. I don’t know what the next viral pandemic will be; I just know that there will be one.

I would largely focus on funding much more of the basic science and the basic understanding of viruses much more so than specific areas of drug development. We’ve gotten lucky with this virus because we did actually have a reasonable amount of research from the SARS virus. This allowed us to move much, much faster. If this had been a true novel virus that we hadn’t encountered and hadn’t done that research, it would have been much, much harder and we would have been much further behind.

To me, the biggest failures came from the White House interfering with the CDC.

On the CDC: I still think it’s the best public health agency in the world. When I look at the scientists—where they are and the quality of the work they do—it’s still very impressive. To me, the biggest failures came from the White House interfering with the CDC. There are areas where the CDC needs more investments. It needs to update its own data infrastructure. I’m sure it needs more resources into its labs. Those are important. But do I think it was lack of those investments that led to the CDC not being an effective agency? No. A normal CDC under normal conditions would have been just dramatically better. And it was just undermined.

On why the CDC must reclaim its position as a global leader: I always remind people that when China created its public health agency, they called it the China CDC. It’s the Korea CDC. It’s the Africa CDC. There’s a reason they are using the term CDC, it’s because the US CDC is the gold standard. And what typically happens in situations like this is those countries around the world calls our CDC for help. They say, “Okay, we have an outbreak here. What should we do?” And what I have been hearing from people around the world is basically in this pandemic, the CDC is not calling back. That’s part of that broader pattern of not engaging with the global community, and it’s incredibly short-sighted. It’s harmful for the world, but it’s also incredibly short-sighted for America because it’s a global pandemic.

America used to gain both soft power and effectiveness by engaging with the world and helping the world do a better job. And we’re not getting that this time round. I would like to see the international work of the CDC expanded. But my sense is, we can’t even get resources to keep the domestic-focused CDC effective.