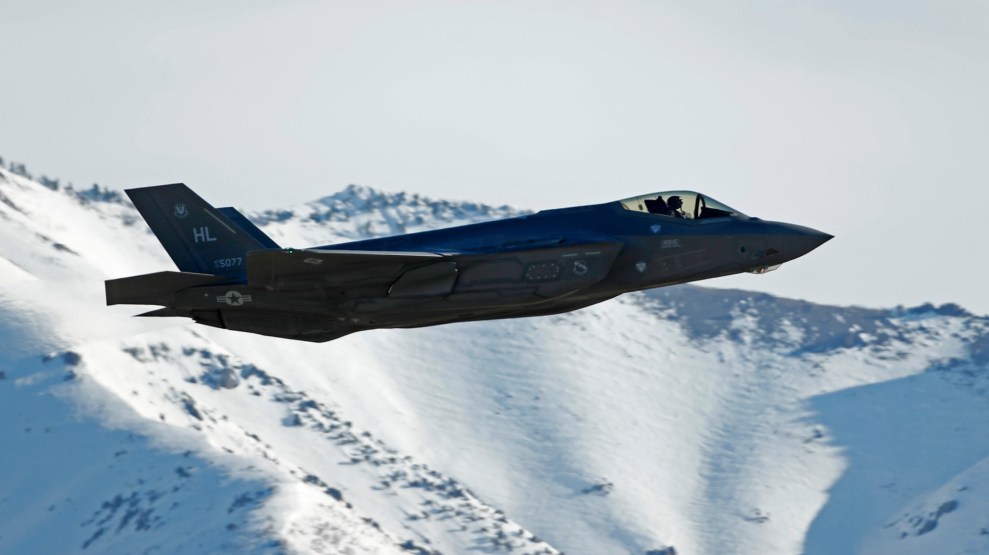 The F-35, Lockheed Martin's signature product, is the most expensive government weapons program in history.George Frey/Getty

It’s been quite a week for Lockheed Martin. On Tuesday, the financial news outlet Barron’s dubbed the giant defense contractor a “pandemic star,” after its quarterly earnings came in at $1 billion more than analysts predicted. The company also played a starring role on Capitol Hill—just not the kind that its executives might have hoped for.

At a hearing Wednesday, members of the House Committee on Oversight and Reform blasted Lockheed for raking in huge profits while its signature program, the F-35 fighter plane, remains plagued with delays and safety problems. A June 2019 report from the Defense Department’s internal watchdog determined that the government had spent $303 million on unusable parts provided by Lockheed to fix existing aircraft, one of several ongoing issues with the next-generation jets that had committee members irate.

Greg Ulmer, vice president and general manager for Lockheed’s F-35 Lightning II program, could not specify how much money Lockheed still owed the government in reimbursements for the faulty parts. And, despite being pressed on the matter by several lawmakers, Ulmer declined to commit to ever paying off that full debt. “It’s a complex problem,” he said. “We continue to negotiate in good faith.”

Faulty parts are just one of the F-35’s problems, which also include its exorbitant cost and ineffective information management system. As I reported in the fall:

Underperformance by the F-35 has been bad and appears to be getting worse. Nearly every month there appears a slew of reports lambasting some aspect of the program, from Lockheed’s data management to cockpit pressure within certain jets that cause “excruciating” ear and sinus pain for pilots. According to the Government Accountability Office, between May and November 2018, F-35 jets achieved “full mission capability” only 26.8 percent of the time; the Pentagon’s minimum acceptable rate is 60 percent. During this period, “fleet-wide F-35 aircraft performance did not meet any of the US warfighter’s requirements,” a GAO report concluded in April.

Ulmer eventually acknowledged that the fighter’s jet information management system, known as ALIS, was “not meeting our customer or fighter requirement,” but he maintained that the fighter jet had become less expensive and safer to fly.

Lawmakers from both parties have bought into the F-35 program by mandating that the Pentagon continue to purchase the jets from Lockheed as part of the annual defense policy bill. (The program’s political benefits are widely spread: It generates jobs in at least 46 states, according to Lockheed.) But their confidence in the program—and Lockheed—seems to be waning. “The general tone of the hearing on both sides of the political aisle was stronger than I’ve seen in the past,” Dan Grazier, who has written extensively about the F-35 for the Project on Government Oversight, told me. “Twenty years in, frustration with the program has really started to bubble to the surface.”

Lockheed still has long way to go. Earlier this year, it announced it was replacing the much-derided ALIS with a new, cloud-based system called ODIN. To many observers, that is a welcome change—even Ulmer admitted that ALIS was an “antiquated” system—but it presents cybersecurity vulnerabilities that have not been fully addressed. Then there’s the matter of the electronic logs used to document whether a plane is safe to fly. Committee chair Rep. Carolyn Maloney (D-N.Y.) said that Lockheed is responsible for at least $183 million in malfunctioning logs but that it has not agreed to provide the government a refund.

The project’s continuing flaws show “just how complicated—I would say unnecessarily complicated—the F-35 program is,” Grazier said. “Something as routine as swapping out spare parts in the aircraft can be so problematic that the House oversight committee has to have a hearing.”

Correction: A previous version of this article inaccurately attributed a quote to Rep. James Comer (R-Ky.).