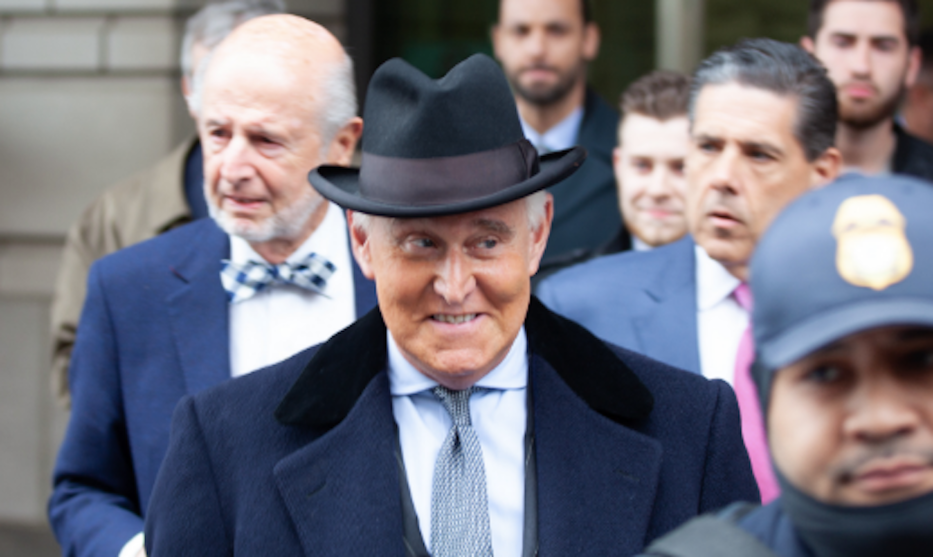 Fresh off of receiving a presidential commutation, Roger Stone on Saturday appeared to use a racial slur during a live taping of a radio show hosted by a Black man. Stone, a longtime adviser to Donald Trump, has insisted that he made no such remark, and he told Buzzfeed Sunday that he has “hired the best technicians in the country and will disapprove (sic) shortly.”

The comments came while Morris O’Kelly, host of the Mo’Kelly Show, and Stone were engaged in a heated discussion over the president’s July 10 decision to commute Stone’s 40-month prison sentence for lying to Congress and witness tampering in the Russia investigation.

“There are thousands of people treated unfairly daily,” O’Kelly said at one point. “How your number just happened to come up in the lottery, I’m guessing it was more than just luck, Roger, right?”

Stone, who up until that moment had been providing rapid-fire, animated responses to O’Kelly’s questions, paused. A muffled voice—apparently Stone’s—was then heard mumbling a few unintelligible words before uttering the phrase “arguing with this Negro.”

For awhile, Stone didn’t respond to O’Kelly. “I thought we were having just a very spirited conversation, what happened?” O’Kelly continued.

“I was talking, and you said something about negroes, so I wasn’t exactly sure,” O’Kelly told Stone, who quickly denied the accusation. “You’re out of your mind,” Stone said.

According to the Associated Press, Stone elaborated on this denial in a statement after the interview:

In a statement, Stone defended himself by saying that anyone familiar with him “knows I despise racism!”

“Mr. O’Kelly needs a good peroxide cleaning of the wax in his ears because at no time did I call him a negro,” Stone said, using lowercase for the word. “That said, Mr. O’Kelly needs to spend a little more time studying black history and institutions. The word negro is far from a slur.”

He cited the United Negro College Fund and the historical use of the word.

At one time, “Negro” was common in the American vernacular to describe African Americans. By the late 1960s, however, the word was scorned by activists in favor of such descriptors as “Black.”

These days, the antiquated word is widely viewed as derogatory in most uses.

In his statement, Stone noted that some of the program’s audio was garbled and alleged that there was cross-talk from another radio show and that his sound was cut off.

Stone claims that it was actually someone else who uttered the slur and told Buzzfeed that he has hired technical experts to prove his innocence.