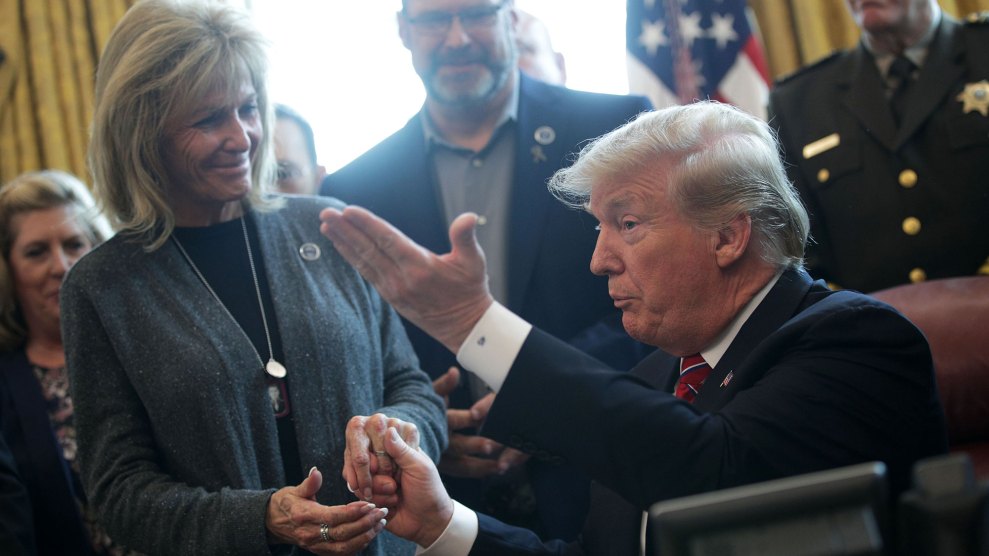 Minutes before the start of Tuesday’s Republican National Convention broadcast, a controversial speaker was pulled from the lineup. Mary Ann Mendoza’s removal came hours after she retweeted an anti-Semitic call to her more than 40,000 followers, encouraging them to investigate a Twitter thread detailing a fake Jewish plot to dominate the world that was circulating among adherents of the QAnon conspiracy theory.

I retweeted a very long thread earlier without reading every post within the thread. My apologies for not paying attention to the intent of the whole message. That does not reflect my feelings or personal thoughts whatsoever.

She deleted the tweet—something of a first for Mendoza, who in the past said she would not back down after Twitter asked her to remove tweets that violated the social media platform’s guidelines. Last year Twitter suspended her account after determining multiple tweets were hate speech according to local media. She refused to remove the posts and Trump, of course, supported Mendoza at the time urging the social media platform to let her back on. Eventually Twitter allowed her to continue tweeting.

Had Mendoza taken the stage Tuesday night, she would’ve shared a story she has shared countless times in the last five years. It’s a tragic story of loss but one that has been used to politicize immigration and fan the flames of anti-immigrant hate speech.

In 2014, her son, Brandon, was 32 years old and a police officer in Mesa, Arizona when he was killed by a drunk driver. The man behind the wheel had been living in the United States for 20 years but was undocumented. She has often said that if the border was “secure” her son wouldn’t have been killed “by an illegal alien” who wasn’t supposed to be in the country.

According to a copy of her planned remarks provided by the RNC before her cancellation, Mendoza would have said that the “driver who killed my son wasn’t even supposed to be in our country, because he was an illegal alien with a criminal record…If our borders had been secure and if our justice system worked like it should have, Brandon would still be walking his beat.”

Had Mendoza taken the stage, she would’ve shared a tragic story of loss but one that has been used to politicize immigration.

Trump has been inviting parents like Mendoza to his rallies since 2015, using their stories to send a message to American families: Be afraid—”illegal aliens” are killers and they’ll come for your children. Often called “Angel Moms,” Mendoza and other parents like her featured in Trump’s events over the years, are part of The Remembrance Project, a “corporation founded” as a “voice for those killed by illegal aliens.” Mendoza is also part of another organization, Angel Parents, that says its goal is “to bring illegal alien crimes to the forefront of politicians and American citizens.”

Mendoza made an appearance at the 2016 Republican convention in Ohio where she shared the story of losing her son. “A vote for Hillary is putting all of our children’s lives at risk,” she told the crowd. It was the convention’s first night, themed “Make America Safe Again.” I was reporting from the arena in Cleveland and what I remember most are the incessant chants of “build the wall!” Thousands stomped their feet on the ground and clapped as they chanted. I can still remember the feeling of anger and rage in the room.

Tonight, Mendoza would have told the crowd that the Obama-Biden administration was responsible for “the dangerous catch-and-release program… a program that allowed Brandon’s killer to avoid deportation for his previous crimes and up his game to murder.”

That claim is one of many from Mendoza and Trump that equate immigrants, especially undocumented immigrants, with crime. However, studies and data have shown that immigrants are statistically less likely to commit crimes than US-born Americans.

Her speech, like many in the first two nights of the convention, would have put an emphasis on the importance of law enforcement and following the laws of this country. But the speech would have made no mention of Mendoza’s connection to a group that the target of a high-profile fraud prosecution.

Mendoza’s story is prominently featured in a promotional video for We Build The Wall, a private group that collected donations to build the a border wall after Trump had trouble convincing congress to authorize the funding he sought. Mendoza is listed on the website of the organization, which last week was the subject of a federal fraud prosecution alleging hundreds of thousands of people were defrauded into donating thinking their funds would go to build a wall between the United States and Mexico. Trump’s former campaign chairman, Steve Bannon, and other right-wing activists were charged with money laundering and conspiracy to commit wire fraud. Records show Bannon took more than $1 million from the donations and bought himself, among other things, a golf cart, a boat, and cosmetic surgery.

My heart is forever broken . . . because our immigration system is broken.

I’m Mary Ann Mendoza. On May 12, 2014, my son, Sargent Brandon Mendoza of the Mesa Arizona Police Department was killed in a head on collision.

He was headed home from his shift, keeping our community safe.

The driver who killed my son was drunk—three times the legal limit—high on meth, and driving more than one hundred miles per hour . . . going the wrong way for more than 35 miles on Phoenix freeways.

The driver who killed my son wasn’t even supposed to be in our country, because he was an illegal alien with a criminal record.

Brandon was a shining light in my life and our community. He truly made a difference in Mesa.  As a modern day beat cop, he was well-known and well-liked. The neighborhood he patrolled and worked hard to rid of the illegal drug dealers, appreciated him making that neighborhood a safe-haven for families again.

In fact, his nickname was “Hollywood,” because he truly shines like a star. The kids in the neighborhood loved him. Parents trusted him. Serving and protecting his community was his passion. It was his life’s goal since he was thirteen.

Brandon’s life represented the best of America. Sadly, his death represents some of the worst.

He didn’t have to die. Not like this. Not now. If our borders had been secure and if our justice system worked like it should have, Brandon would still be walking his beat. Checking up on the kids. Waving to their parents. Keeping everyone safe.

You can find out more about their stories, and how to preserve their legacies at angel families dot org.

President Donald Trump is the first political leader we’ve ever seen take on the radical Left to finally secure our border and to end illegal immigration since day one. I’ve met him many times and I know what’s in his heart . . . I know what he hopes and dreams for this country.

Since he took office: more than 280 miles of southern border wall have been built, with more than 500 miles expected by early next year.

There has been a 78 percent decline in illegal border crossings since May of last year.

And President Trump put an end to Barack Obama’s – and, notably, Joe Biden’s – dangerous catch-and-release program . . . a program that allowed Brandon’s killer to avoid deportation for his previous crimes and up his game to murder.

He knows the formula for America’s greatness is simple. It’s everything Brandon represented:

Ensure law and order . . . and protect the vulnerable,

Give generously to your community,

And practice your faith.

Brandon’s opportunity to contribute to America’s greatness during his lifetime was cut short. But his spirit is alive, and his legacy will always be embedded in the fabric of America. I know it will always be on President Trump’s mind and in his heart.  He will never forget Brandon, and he will never stop fighting for us.

His record is clear and strong.

Appointing conservative judges who will uphold our laws and provide justice.

Safer communities without sanctuary policies that give refuge to illegal criminals.

Securing our borders so good-paying jobs – that provide financial security for families – go to Americans . . . not illegal aliens.

Supporting our Law Enforcement who help keep our neighborhoods safe.

This is the foundation for a bright future.  A bright future for all of us . . . with greater opportunity, tremendous prosperity, and more peace.

A brighter future that President Trump will continue fighting for when we re-elect him on November third.