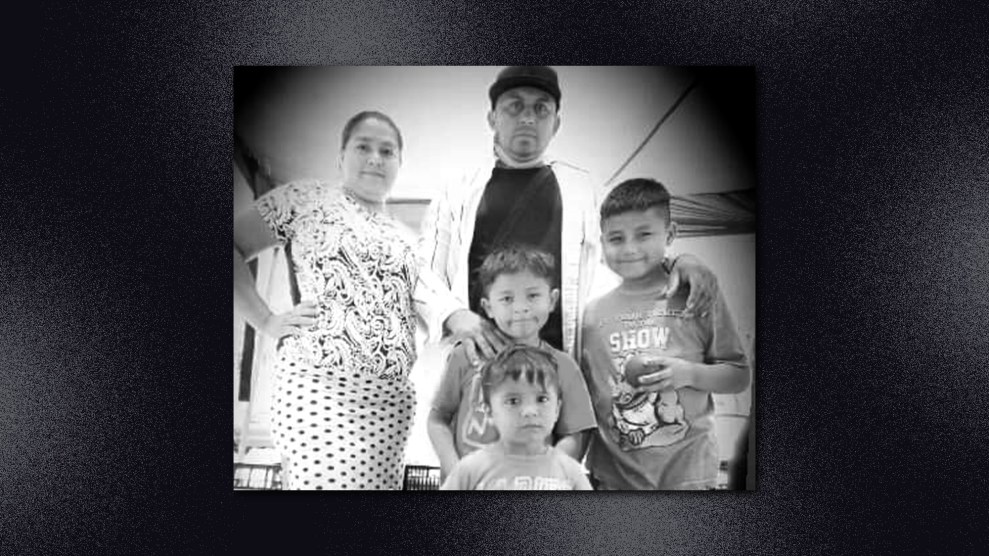 After fleeing extortion and threats in El Salvador in late 2018, Juan Carlos Perla, his wife, and their four young children waited in Tijuana for seven weeks before they were allowed to ask for asylum at the US border in early 2019. They then joined the now roughly 68,000 asylum seekers who have been sent back to Mexico as part of the Trump administration’s Migrant Protection Protocols program, which forces immigrants to wait on the other side of the border while their claims are pending in US immigration courts.

If I had known back then what I know now, more than a year and a half later, we wouldn’t have waited to present ourselves at the port of entry. We would’ve just tried to cross illegally. We thought we were doing the right thing.

Our three sons are now 8, 5, and 2 1/2 years old. My little one was 4 months old when we left El Salvador—and here we are in Tijuana still. My kids have missed out on school. My wife is very stressed and losing hope, but I keep telling her that it’ll be worth it. Being here this long hasn’t been easy—it’s been struggle after struggle and so many moments of anguish. We feel like we’re just navigating a sea of tribulations. But I guess God knows what he’s doing, so we’re still fighting.

Unfortunately, we got to the border after President Trump had changed the laws and officials were starting to send people to wait in Mexico after we legally asked for asylum at the ports. We were living in shelters and the streets, and the US officials kept telling us to come back to the port for the next court date. Last year, we went to court six times in San Diego. The way they mistreated our kids and the whole thing of going to court was such a sacrifice that at one point we thought we’d stay in Mexico. I had a work permit from the Mexican government, so I could work at a butcher shop. For a few months, we were able to rent a little place. We showed up with nothing, and the owner helped us while I tried to get some money to feed my family and my wife cleaned the house of the woman who let us stay there. I fixed up the place, but then when we had to go to court again, we came back to find that the woman had packed up our things and given them away, so we had nowhere to go. She treated us like invaders, and my kids are the ones who paid the consequences.

We had to go to a shelter where they mistreated migrants, especially children. Things were really bad there. From there we went to a third shelter, and I met a friend who let us move into an abandoned trailer. It was really old and full of ants, mosquitoes, and even rats. My middle son ended up covered in bug bites at one point. So we had to leave that too and are now living in another shelter for families.

The work permit that the Mexican government gave me expired after a year. So I can’t work at places like the butcher shop because now I’m undocumented here—we don’t have papers anymore. I tried to renew the permit but couldn’t.

I met a friend who let us move into an abandoned trailer. It was really old and full of ants, mosquitoes, and even rats. My middle son ended up covered in bug bites at one point.

Now I’m picking up trash. I go from dumpster to dumpster looking through the garbage to see what I can find that then I could clean up or fix so I could sell them. I use that money to feed my family. I also used some of it to buy a few vegetables a little while back, and I’ve set up a few crates on the street where I sell onions, tomatoes, and papayas, trying to make enough to eat every day. We are in desperate need of help. My kids need food. My oldest son asks me why we still can’t enter the United States, because he wants to study there.

We’ve been to court in the United States a total of six times, but since the pandemic, we haven’t been able to, so we just show up at the border and they tell us to come back next month. We’re going to keep going until the end, even though they’ve postponed our court date five times since the pandemic started. What I really want is to be able to go to court, because we finally found a pastor who lives in the United States and she connected us with an organization that can provide legal help. She lives in Oregon and even said she would take us in.

People have told me that there are elections going on there, and from what I understand, Trump isn’t going to win. People tell me that the new candidate has a lot of support, and I know how much can change with a new president. Maybe that new president can let us in.