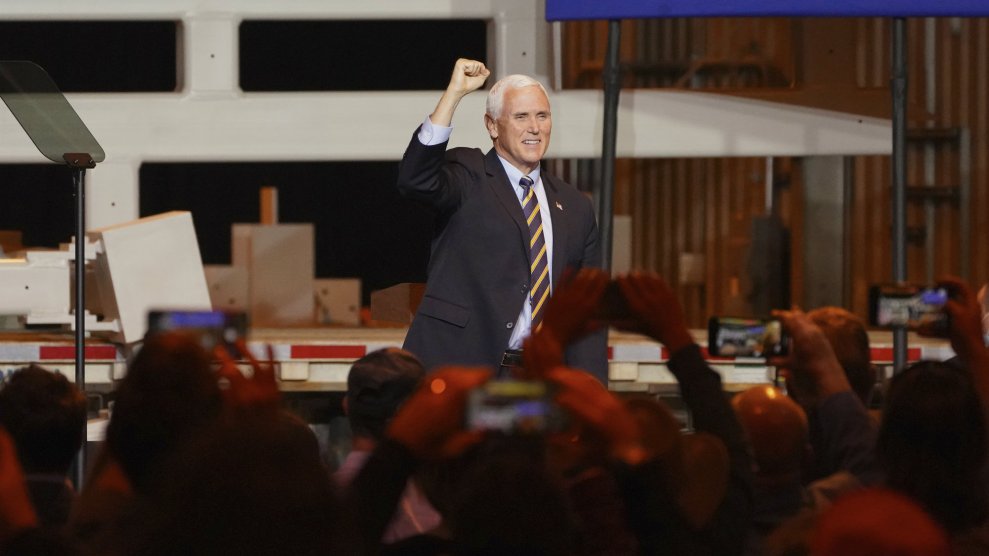 After months spent traveling to packed rallies, refusing to wear masks in public, and throwing parties while the rest of the country was coping with the spread of the coronavirus, Donald Trump and the GOP are dealing personally with an outbreak that almost anybody could’ve seen coming. Trump tested positive and has been hospitalized with the virus, and many of those closest to him, including first lady Melania, campaign manager Bill Stepien, press secretary Kayleigh McEnany, former adviser Kellyanne Conway, and close aide Hope Hicks, have all tested positive.

And yet, even though the aggressive flouting of public health guidelines is precisely what led to this coronavirus cluster at the highest levels of government, Vice President Mike Pence and Sen. Kamala Harris (D-Calif.) are set to debate on Wednesday evening in Salt Lake City at the University of Utah.

After Trump tested positive, one would have thought that both sides would make an effort to make the venue safer. Not so. Finally, after some haggling about how far apart the two candidates would stand—with the Democrats arguing for more safety—the debate commission agreed to place the podiums 12 feet apart and set plexiglass between the candidates. Pence’s staff mocked Sen. Harris for wanting to keep her distance.

"The two camps were split over whether to erect a plexiglass barrier… Harris' campaign supported it, Pence's opposed it.

'If Sen. Harris wants to use a fortress around herself, have at it,' said Katie Miller, a Pence spokeswoman."https://t.co/GG8U0H4ucZ

But is having an in-person debate with someone who has been physically so close to Trump a good idea? The design of the West Wing makes it nearly impossible to socially distance. There have been reports that staff members have been berated for wearing masks, and Pence attended the Rose Garden event for Judge Amy Coney Barrett that appears to be the epicenter of the subsequent outbreak. In the last two weeks, Trump and the Republican Party have shown the public that any of their events can be a superspreader; California Pastor Greg Laurie got sick after attending a Prayer March on the National Mall with Pence and a party in the Rose Garden later that day.

It’s not just Harris and Pence who would be at risk. What about moderator Susan Page from USA Today, the people in the audience, those who manage facilities at the University of Utah, and the staffers who will presumably be working during the debate? And let’s face it, the vice presidential debate has been generally pro forma and not as highly anticipated as the presidential debate. (Although given the respective ages of the candidates, this one may not feel so irrelevant.) But whatever the broader historical context, this will be the first time that attending it could kill you.

Consider what we know about the events that COVID-positive Republicans have appeared at recently. On September 26, the White House hosted a partly indoor soiree for Judge Barrett, the president’s Supreme Court nominee to replace Justice Ruth Bader Ginsberg. At the event, large crowds of unmasked people mingled, hugged, and shook hands. Many of the attendees are now sick with the coronavirus, including former Gov. Chris Christie and Sens. Mike Lee (R-Utah) and Thom Tillis (R-NC), not to mention John Jenkins, the president of Notre Dame University.

Three days later, Trump flew to Cleveland for the first debate with Joe Biden. Not only did Trump perform disastrously, but many of his family members and campaign staff took off their masks as soon as they sat down—despite the presidential debate commission requiring and the Cleveland Clinic physicians urging that they be worn. Late last week, the city of Cleveland announced that 11 cases of COVID could be traced back to out-of-state staffers setting up and planning the debate. On October 1, despite Hope Hicks, who’d accompanied him to Cleveland, testing positive—a fact that was only disclosed because of the work of reporters from Bloomberg—Trump went to Bedminster, New Jersey, for a fundraiser that included a buffet. In the early hours of Friday morning, Trump announced that he and his wife had tested positive for the virus. He was taken to the hospital later that day. (Unsurprisingly, the timing of his diagnosis was unclear because of the stunning lack of transparency from the White House.)

Despite this series of unfortunate events, the vice presidential debate is still on. And Pence reassures anyone who will listen that he is being tested regularly, the tests are all negative, and that he and everyone around him are safe.

The aggressive focus on testing provides a terrifying and revealing insight: Trump and his sycophants have no idea how infectious diseases spread. Didn’t he continue to test negative until one day when he simply didn’t? If testing yourself every day could prevent you from getting and transmitting the virus, the president probably wouldn’t have had to be hospitalized.

The rapid tests that the administration favors to screen everyone, from attendees at a Rose Garden ceremony to passengers on Air Force One, have a high false-negative rate. It just doesn’t matter how many times Pence tests negative, because it’s clear that no amount of positive tests will get Trump or those around him to change their behavior. On Sunday evening, in a move that baffled scientists, doctors, and infectious disease specialists, the president took a joyride just outside of the Walter Reed Medical Center to wave at supporters despite the fact that he was sick and presumably still symptomatic. Why would an infectious person put additional people at risk, like his Secret Service detail, just to do a half-hearted wave at supporters gathered outside the hospital? It makes perfect sense once you understand that the White House and the Trump campaign’s infection protocol is inadequate to the point of being nonexistent.

Not only are Republicans trying to use testing as a prevention strategy, but there appears to be absolutely no effort for robust contact tracing. Tracing the sick allows public health officials to notify potentially exposed people that they need to quarantine while waiting for test results. Instead, Trump officials and other Republicans have tried to continue to operate as if everything were normal, and use previously negative tests as their rationale for ignoring public health guidelines.

There’s no reason to believe that the Trump campaign or the White House will suddenly adapt protocols that will make the vice presidential debate safer than any other events Republicans have attended. Trump downplayed the virus, contradicted his own public health officials, and relentlessly mocked those wearing masks, including Biden. Plus, Trump is seeking early release from Walter Reed as if he personally defeated the virus.

Meanwhile, tens of thousands of people in the United States continue to get infected every day. 210,000 people have died across the country and a major outbreak caused by the president and other Republicans’ wildly reckless behavior is unfolding every day. Trump continues to urge the public not to be afraid of COVID. Ignore this advice, as my colleague Tim Murphy writes:

Be afraid of COVID. Be afraid of getting it, be afraid of giving it to others, be terribly afraid of people you care about contracting it. Be afraid of what a pandemic—even if it doesn’t seem to affect you personally—means for your neighbors. (It’s good to care about other people, despite what the callous behavior of the Trump White House over the last week would suggest.)

Nobody would fault you for thinking that Trump and the Republicans are existing in two realities. One, defined by malice and blind political ambition, urged the public to resume normal life while essentially trying to wish the virus away. In the other, defined by basic common sense, these same people, now infected, took the pandemic seriously and received the kind of health care ordinary Americans only dream of. But Trump’s casual attitude about being hospitalized reveals something more sinister: Trump, Pence, and their cronies think they’re invincible, that the rules never apply to them. That’s the dangerous mindset embodied by the unmasked man a mere 12 feet away from Sen. Harris on the debate stage on Wednesday night.