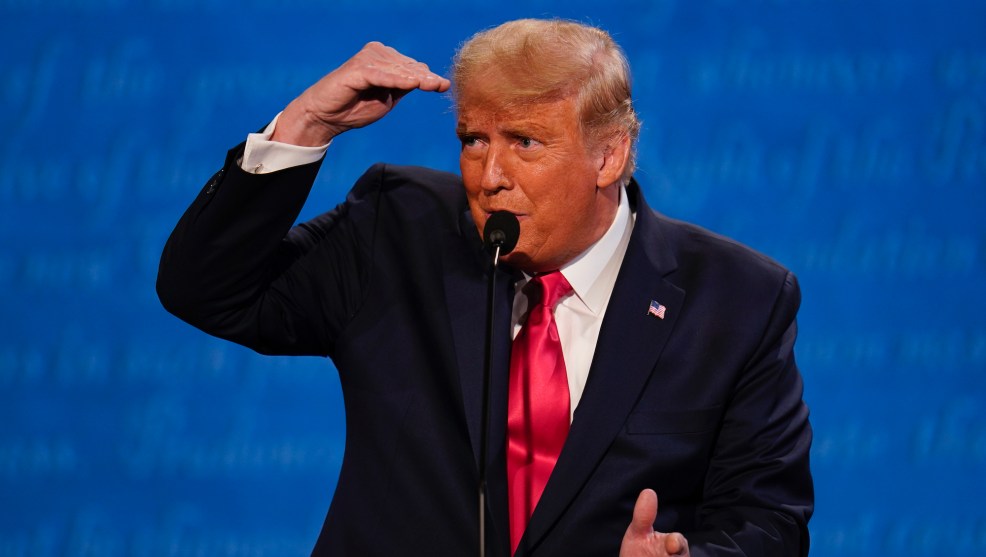 In the second presidential debate of 2020, the sitting president running for reelection was not bonkers. He was only occasionally rude, and his rants were intermittent, not constant. So compared with his maniacal performance in the first debate, Donald Trump scored. But he still sent the message: He doesn’t care that much about other people. Not about COVID victims. Not about children separated from their parents (and those who are horrified by that). Not about Dreamers. Not about families of color who have to contend with police violence. Not about Americans who sit at the kitchen table worrying about their health care, jobs, and bills.

Almost every time Trump had the opportunity to connect with others beyond the debate stage, he took a pass. His focus was mainly on slamming—and smearing—Joe Biden. And that mission was largely untempered by any demonstrable concern for the citizenry. Biden had that territory all to himself—and he seized it.

This was clear right out of the chute, as NBC News’ Kristen Welker, an even-keeled and effective moderator, opened the questioning with a query about the pandemic. Throughout the discussion of this ongoing crisis, which is claiming thousands of American lives a week, Trump evinced not an iota of empathy. With over 220,000 dead, he boasted—if that’s what you can call it—that 2.2 million were not dead. That’s the number of people who probably would have lost their lives to the coronavirus if absolutely no government action had been taken. (This is akin to a firefighter saying, “Imagine all the folks who would have died had we not turned on the hoses.”) And Trump stuck to his usual BS, insisting he had done a grand job, claiming his own medical treatment was a cure (it wasn’t), and declaring a vaccine was weeks away (it is not). “We’re rounding the turn,” Trump proclaimed. “It’s going away.” He said the nation was “learning to live with it.” There wasn’t a word of sympathy for those stricken, for the families who have said goodbye to their dearest, and for those Americans who have lost jobs, livelihoods, and precious moments.

Biden had an easy opening. Noting the high and rising death toll, the former vice president asserted, “Anyone responsible for that many deaths should not remain president of the United States of America.” He presented his plan for how handling the pandemic. (Trump offered none.) And Biden did that thing he did so well in the first debate: He sought to connect with folks affected by this horrific and continuing tragedy. He talked about those people who have experienced the deep loss of the pandemic: “You folks home who have an empty chair at the kitchen table this morning, that man or wife going to bed tonight and reaching over to try to touch their—out of habit—where their wife or husband was, is gone. Learning to live with it? Come on. We’re dying with it.” Biden was acknowledging the awful reality of the killer virus. Trump responded by claiming Biden would shut down the country should he become president.

It seemed the only reality for Trump was the fight he is now in to retain power and the threat posed to him by Biden.

This dynamic continued throughout the evening. Trump tried to inject Hunter Biden—and confusing and unproven allegations about his business deals—into the conversation as much as he could. (While doing so, Trump claimed he had never gotten any money from Russia, which was a lie. A Russian oligarch paid Trump millions of dollars in 2013 when Trump staged the Miss Universe contest there, and Trump pocketed about $50 million in profit when another Russian oligarch bought a run-down Palm Beach mansion from Trump in a deal that Trump himself believed was tied to Vladimir Putin.) It’s unlikely that non-Fox watchers could follow Trump’s convoluted accusations. Biden’s retort was more plainspoken: “Release your tax returns or stop talking about corruption.” With this back and forth often impenetrable, the overall debate did generate an impression of who gives a damn about someone other than himself.

When a question was posed about the Trump administration’s policy of separating migrant children from their families at the border, Trump defended the measure and acted as if it was no biggie. He callously observed the kids are “so well taken care of” in “facilities that were so “clean.” Biden countered with heartfelt outrage: “Those kids are alone. Nowhere to go. It’s criminal.” Biden also spoke earnestly about Dreamers, people who were brought to the United States as children without documentation and shielded from deportation but now targeted by the Trump administration: “Many of them are model citizens. Over 20,000 of them are first responders out there taking care of people during this crisis. We owe them.”

During one of those Trump attempts to make Hunter the main focus, Biden spoke into the camera: “There’s a reason why he’s bringing up all this malarkey. He doesn’t want to talk about the substantive issues. It’s not about his family and my family. It’s about your family.” Trump mocked the ex-veep and said it was a cliché for a politician to resort to “kitchen table” issues. “I’m not a typical politician,” Trump sneered. “That’s why I got elected.”

This fundamental difference between the two candidates was again illuminated when Welker asked them about the Talk: that discussion Black parents have with their children regarding how to behave so they won’t be shot by police officers. Biden got personal. Referring to his daughter, a social worker, he said: “I never had to tell my daughter, if she’s pulled over, make sure she puts—for a traffic stop—put both hands on top of the wheel and don’t reach for the glove box, because someone may shoot you. But a Black parent, no matter how wealthy or how poor they are, has to teach their child: When you are walking down the street, don’t have a hoodie on when you go across the street. Making sure that you in fact, if you get pulled over, just ‘yes sir,’ ‘no sir,’ hands on top of the wheel.” He added, “The fact of the matter is, there is institutional racism in America.”

Trump responded with an ego-driven and false boast: He has done more for Black people than any president with the “possible exception” of Abraham Lincoln. (He also insisted he was “the least racist person in the room.”) It was no shocker that a man with a long record of racism could not identify with this component of the American condition. But Trump didn’t even bother to try.

Trump’s advisers were likely ecstatic that in these 90 minutes he did not come across as a madman. And if there are any voters out there who were put off by his previous outing on the debate stage but looking to stick with him, Thursday night might have provided them justification for doing so. Yet though Trump had managed to dial back the erratic behavior and extremism—while still lying a mile a minute—this face-off again showed what truly separates these two men. Even in a subdued state, Trump was every bit the narcissist he has always been. Some things just can’t be dialed back.