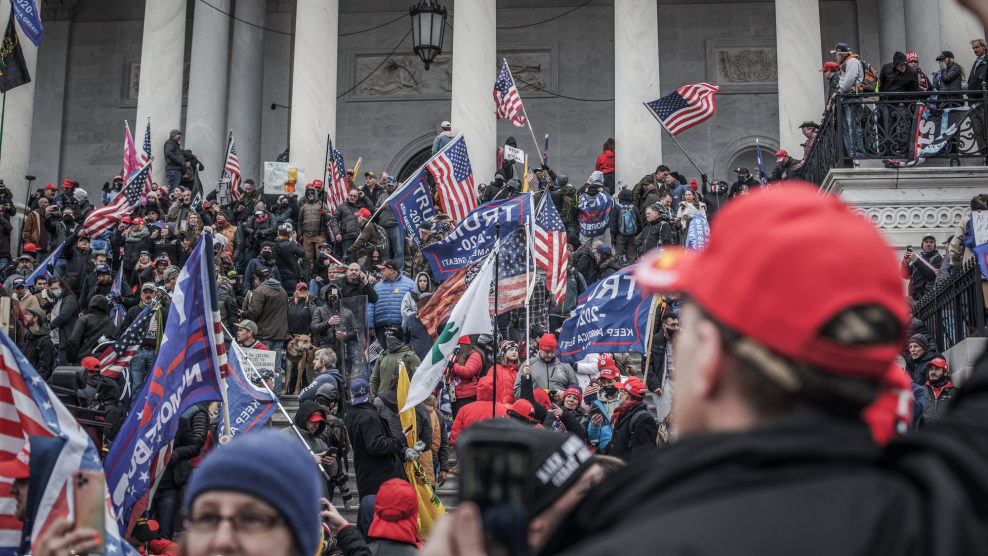 Among the pro-Trump crowd on January 6, when a mob stormed the Capitol and caused five deaths, were more than a dozen state lawmakers, many of whom now face calls to resign.

“Any Republican legislator who took part in yesterday’s insurrection, in Washington, DC or anywhere else in the country, should resign immediately,” Jessica Post, president of the Democratic Legislative Campaign Committee, said in a press release a day after the riots. “Yesterday was a stain on our country’s history and a dangerous affront to democracy—all those involved have no place making laws.”

The “Stop the Steal” protests were endorsed by Republican organizers across the country, and the fundraising arm of the Republican Attorneys General Association even sent out robocalls urging supporters to march to the Capitol and “call on Congress to stop the steal.” Trump himself endorsed the protests and was slow to condemn them even when protesters stormed into the Capitol.

Here is a list of current lawmakers who were spotted outside the Capitol or at Trump’s rally on the day of the riots. We’ll update it if any more names come to light.

Alaska state Rep. David Eastman attended Trump’s rally outside the White House and later shared several posts on social media suggesting that Antifa was behind the Capitol riots. “Those who planned and carried out today’s attacks should be speedily identified and put before a jury of their peers for public trial so that our nation never again has to experience an attack at their hands,” he said in a statement posted to his Facebook page. When reached for comment, Eastman told Mother Jones that he “traveled to DC to speak with members of Alaska’s Congressional Delegation and was glad for the opportunity to hear the president speak in person.”

Arizona state Rep. Mark Finchem was at Trump’s rally and made his way to the Capitol but later gave a shifting account of what he saw. Calling himself a “witness” to the events in his newsletter, Finchem falsely claimed that protesters did not attack the police and cited a baseless conspiracy theory that “a handful of individuals, who have been identified as ANTIFA infiltrators,” caused property damage. When the Phoenix New Times asked Finchem about the claims in his newsletter, he said that he was “a significant distance away” from the Capitol steps. “I did not say that there was not violence against police officers, I did not see any, but I did see people following police officers prompting to pass by the barricades,” he told the outlet. “Since I was a significant distance away from the steps I referenced in my statement, I did not have a vantage point to see what you describe.” Earlier this week, a Democratic state legislator filed an ethics complaint against Finchem, arguing that he is “not entitled to hold office because he supported the insurrection against the national government.” Finchem did not respond to a request for comment.

Colorado state Rep. Ron Hanks marched to the Capitol following Trump’s rally, according to an interview he gave a Colorado radio station. “I was a little surprised to see people already on the scaffolding, with the Trump flags, and so forth,” he said. Following the riots, Hanks was “absent for the majority” of the Colorado General Assembly’s legislative session that started on January 13, the Denver Post reported. His Facebook page has also been removed. He did not respond to a request for comment.

Georgia state Rep. Vernon Jones, who made news last year as a rare Democratic elected official to endorse Trump, announced his switch to the Republican Party during a speech at Trump’s rally outside the White House. Jones had not run for reelection and was in the final days of his term as a Georgia state lawmaker. “To the peaceful Patriots who came to our nation’s Capitol today, we can not drown out our message with violence,” he tweeted after the riots broke out. “We are not ANTIFA or a lawless a mob.” Jones did not respond to a request for comment.

Illinois state Rep. Chris Miller, who is married to US Rep. Mary Miller (R-Ill.), was filmed during the Trump rally criticizing “dangerous Democrat terrorists.” He had previously rallied outside the Illinois State Capitol in May during a rally where he called Gov. JB Pritzker a “domestic enemy.” Miller did not respond to a request for comment.

Missouri state Rep. Justin Hill, a fourth-term lawmaker, attended Trump’s rally and told the Associated Press that what he saw “was very peaceful” and included “a lot of patriotism and prayer.” Hill, who missed his own swearing-in to be at Trump’s rally, told the St. Louis Post-Dispatch that he “wasn’t close enough” to the Capitol to see anything and said it was “such a sad day.” Hill did not respond to a request for comment.

Pennsylvania state Sen. Doug Mastriano spent more than $3,300 on charter buses to the Capitol ahead of the pro-Trump protests there, according to a report from WHYY, Philadelphia’s NPR affiliate. Mastriano told the Associated Press that the violence was “unacceptable” and said he left the Capitol area once it broke out. “As a military veteran and retired colonel, I do not—nor would I ever—condone the violence we saw today,” he said in a statement cited by York Daily Record. State Democrats have called for his resignation. Mastriano did not respond to a request for comment.

Rhode Island state Rep. Justin Price said in a series of now-deleted tweets that he “marched to the Capitol” with “peaceful patriots,” the Boston Globe reported. Price, who also baselessly claimed in an interview with the Public’s Radio that the riots were instigated by Antifa, was urged to resign in an open letter signed by roughly three dozen state and local lawmakers. “Your seditious acts show that you are incapable of upholding your oath, of promoting the rule of law, and of meeting the high standards of elected office,” the letter stated. Price was also criticized for refusing to wear a mask during his swearing-in ceremony in Providence. He did not respond to a request for comment.

Tennessee state Rep. Terri Lynn Weaver, hours after violence broke out at the Capitol, posted a photo on Twitter with the caption, “Epic and historic day gathering with fellow Patriots from all over the nation.” Weaver, who traveled to Washington, DC, to attend Trump’s rally, acknowledged to the Tennessean that some crowd members had broken into the Capitol but said, “There wasn’t any violence going on here.” Multiple petitions have circulated online calling for her to resign. Weaver did not respond to a request for comment.

Virginia state Sen. Amanda Chase, a candidate in this year’s gubernatorial election, attended Trump’s rally and said in a video posted to her Facebook page, “When you back good people—law-abiding citizens—into the corner, they will push back.” Chase, who said she left Trump’s speech early on the advice of her security team, blamed the riots on “antifa or BLM agents of destruction.” A spokesperson for Chase said in an email that she “was on her way home when the violence broke out.” Chase’s official Facebook page was eventually suspended, and Democrats in the Virginia State Senate called for her to be censured.

Virginia Delegate Dave LaRock acknowledged being part of the pro-Trump crowd in DC and, in a statement on his website, condemned “in the strongest possible terms those who forced entry into the Capitol, destroyed property, disrupted the meeting of Congress, and caused injuries and a death.” But he also shared the conspiracy theory that “paid provocateurs” were sent to infiltrate “this patriotic group for the purpose of inciting violence.” As calls grew from local leaders for him to resign, LaRock released an additional statement saying he has “no intention of caving to ridiculous politically motivated demands.” He did not respond to a request for comment.

West Virginia Delegate Derrick Evans filmed himself breaking into the Capitol and could be heard yelling, “We’re taking this country back whether you like it or not. Today’s a test run. We’re taking this country back.” Two days later, he was arrested and charged with unlawfully entering a restricted area, making him the first sitting lawmaker to be arrested in connection with the insurrection at the Capitol. After initially refusing to resign from his elected position, Evans ultimately stepped down. His attorney, John H. Bryan, did not respond to a request for comment but said in an earlier statement that Evans “was exercising his First Amendment rights to peacefully protest and film a historic and dynamic event.”

West Virginia state Sen. Mike Azinger was one of the Trump supporters who marched to the Capitol, but he said what he saw was “a peaceful rally.” As for the storming of the Capitol, he said, “The people that are responsible for that were Antifa.” In an interview with West Virginia Metro News, he added that the pro-Trump crowds were “inspiring and patriotic” and said he hopes Trump “calls us back.” The West Virginia Senate Democratic Caucus said his comments were a “gross mischaracterization of the events.” Amid calls for him to step down, Azinger said, “I’ll resign when cows fly.” He did not respond to a request for comment.