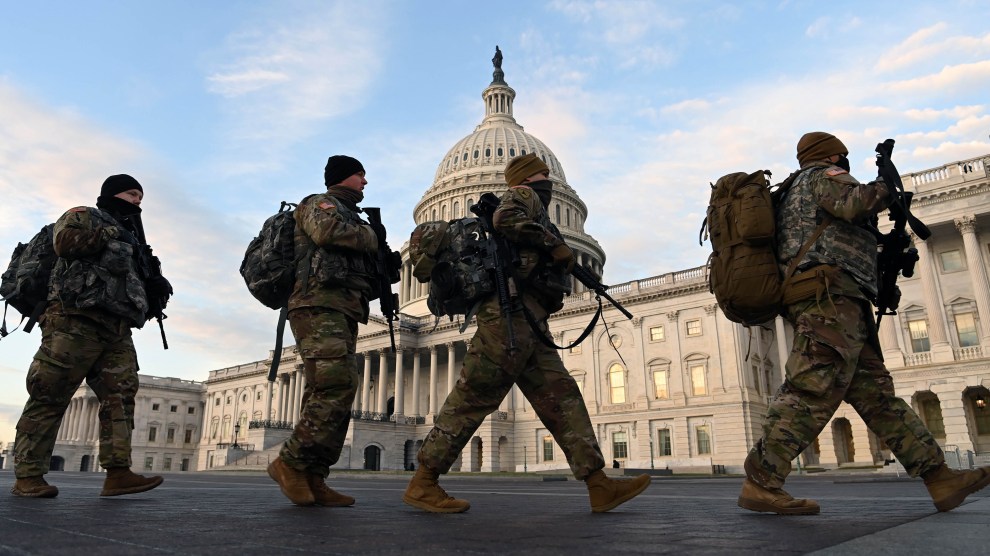 Ahead of an Inauguration that experts and federal officials have warned could culminate in violence, extremists are trading tactics in fringe online platforms on how to carry out deadly attacks. In posts on 8kun, the home of QAnon and successor to the banned extremist hotbed 8chan, and on right-wing extremist channels on the messaging app, Telegram, anonymous users are sharing instructions on how to make bombs and other weapons, as well as military tactical guides.

“The odds [of violence] are a lot higher than I’ve seen in a long time.”

On 8kun, Mother Jones reviewed a collection of files called “Civil War Tools” that had been shared on the site using MediaFire, a file-hosting service, with instruction guides for building homemade explosives, silencers, and other weapons. The files also contain guides on guerrilla warfare and operational security.

Similarly on Telegram, in a channel for Boogaloos, a loose group of extremists who are preparing for an anticipated second civil war have shared materials including a United States Marine Corps manual on “Military Operations on Urbanized Terrain.”

NBC News reported on Tuesday that it had seen instances of homemade bomb and weapons guides being shared in white supremacist Telegram groups. Since then, Telegram has started banning some extremist groups that run afoul of its policies, but many are still online, including some which the company appears to be aware of.

Posting such material online is far from unprecedented. The Anarchist Cookbook, one of the items shared in the groups, is something that’s been passed for decades on the internet. And the Marine Corps Manual is accessible via a Google search. But the documents are being shared in channels with intense rhetoric, places where well before the January 6 violent riot at the Capitol, Trump supporters, white nationalists, neo-Nazis and other right-wing extremists openly talked about and encouraged brazen violence.

“I don’t want to inflame concerns, but for me, the odds [of violence] are a lot higher than I’ve seen in a long time,” said Michael E. Hayden, a reporter at Southern Poverty and Law Center senior reporter, during a Friday press briefing, attributing the high risk to the “heat of the rhetoric that we’ve seen in the aftermath” of the Capitol mob.

Across right-wing sites, users have openly posted aggressive messages pushing violence from Trump supporters on Inauguration Day. Hayden said that people like Andrew Anglin, the founder of the notorious neo-Nazi The Daily Stormer, have been encouraging violence in advance of the presidential transition. Anglin also advocated for violence at the white supremacist Unite The Right Rally in Charlottesville in 2017, which turned fatal.

Joshua Fisher-Birch, a researcher at the Counter Extremism Project, also shared with Mother Jones several instances of neo-Nazis calling on their followers to carry out lone-wolf attacks and sharing other tactics on Telegram and 8kun.

Bennett Clifford, an extremism researcher based at George Washington University, cautions that it is hard to gauge the impact of the spread of these kinds of materials, especially since homemade bomb making is difficult for the inexperienced, even with instruction.

“There is a difference between reading how to do something versus how to do it yourself. Building a working weapon of mass destruction is not the same thing as making a peanut butter and jelly sandwich. I’m not denying people can do it, I’m just not sure whether or not access to online instructions would change a lot,” Clifford said.

Still though, Clifford notes “that there are people who have the knowledge to build weapons and have already done it and practiced it.” On these public channels, at least, Mother Jones found no evidence of specific plans or plots.