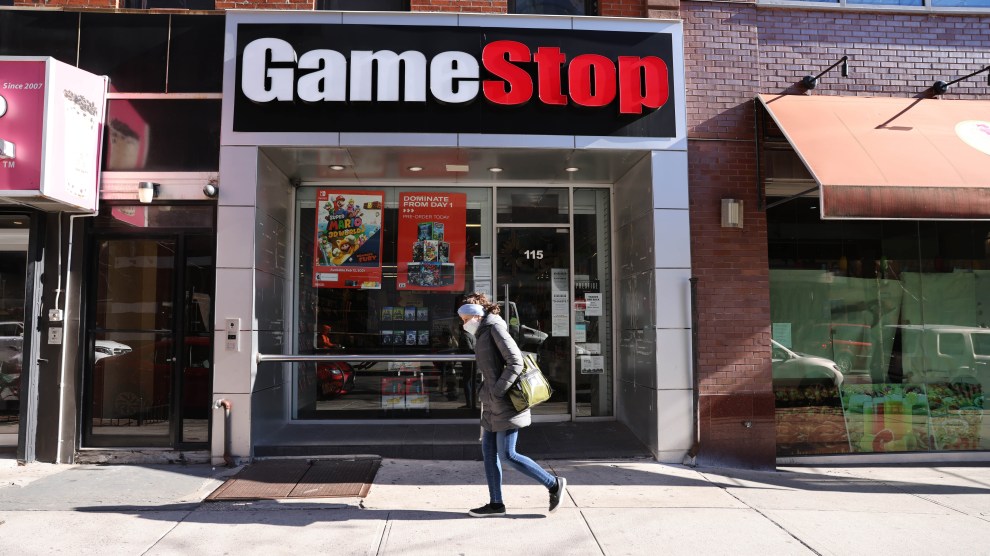 Over the last week, many people have made money because of GameStop who don’t work for GameStop. The company’s stock price jumped through the roof, benefiting retail investors who had been led in an ingenious coordinated effort by Redditors to short squeeze hedge funds that had made massive bets against the video game chain. The whole thing has minted a few millionaires (if they don’t lose it all just as fast by holding on too long); spurred wall-to-wall coverage on CNBC, as the network keeps booking analysts and hedge fund managers losing their shit; and also led to a questionable, if satisfyingly anti–Wall Street, shout of “revolution.”

I wondered, though: What about the actual GameStop employees?

There is a real working class somewhere in this revolution—the local managers and hourly employees trudging into suburban malls, masked and bleary-eyed, to sell video games. Has the revolution been galvanizing for them? Not really, I learned.

I called almost two dozen local GameStops, and every store employee gave me one of three answers: “we cannot talk about this,” “it doesn’t affect me at all,” or “what?”

“I have no idea what you’re talking about,” one employee at a Virginia story told me. “I don’t follow the news.” After I explained to him what was happening, he paused and just said, “Hmm.” I thanked him for his time and hung up. “I haven’t been paying attention to the stock. It doesn’t really interest me,” one worker in Texas told me. “I just see that and go past it.”

“I have no idea what you’re talking about,” one employee at a Virginia story told me. “I don’t follow the news.”

One particularly nice guy in a Seattle store cheerily told me that he had seen the price jump. But he admitted, “I really don’t follow it.” To mix it up, I asked him about the juxtaposition of his pay with people making tons of money off the brand that he was the backbone of. “Ah, you know, it’s not much—it’s pretty average,” he said, still cheery. Then, in a quick, hushed tone, he told me to “call back in five hours,” laughed nervously, and hung up. (I assumed his manager was nearby; he didn’t give me another number to call.)

I pretty much just got versions of that throughout.

No one, as I thought they might, discussed the idea of the joyful death of hedge funds. I know most regular people aren’t investors—a little over 50 percent of Americans own stocks—but I thought that GameStop workers might have a morbid curiosity in the strange fate of their corporate bosses, caught in a tug-of-war between savvy Reddit trolls and cocky finance masters of the universe. I am certainly curious. And it seems everyone in media is, too—from the New York Times to Fox News to a Twitch stream with Rep. Alexandria Ocasio-Cortez (D-New York). But none of the GameStop employees I spoke with was terribly interested.

Aaron Mak also called up a few GameStop’s for Slate. He spoke with five employees, who had more to say about their frustrations with how the company treated them than about Elon Musk. “Company stock is increasing in value, but from how they’re treating us, you’d think GameStop is next to broke,” one employee told him. Mak also outlined the low pay that workers receive: about $10 an hour to be a clerk or “senior guest advisor,” $12.50 to be an assistant store leader, and $15 to lead the store outright. Some of the employees he spoke with had more thoughts on the stock. One had purchased some. His conversations sounded a lot like mine. From where retail workers stand, the GameStop story is just another story about shitty jobs. So, when do they get their revolution?