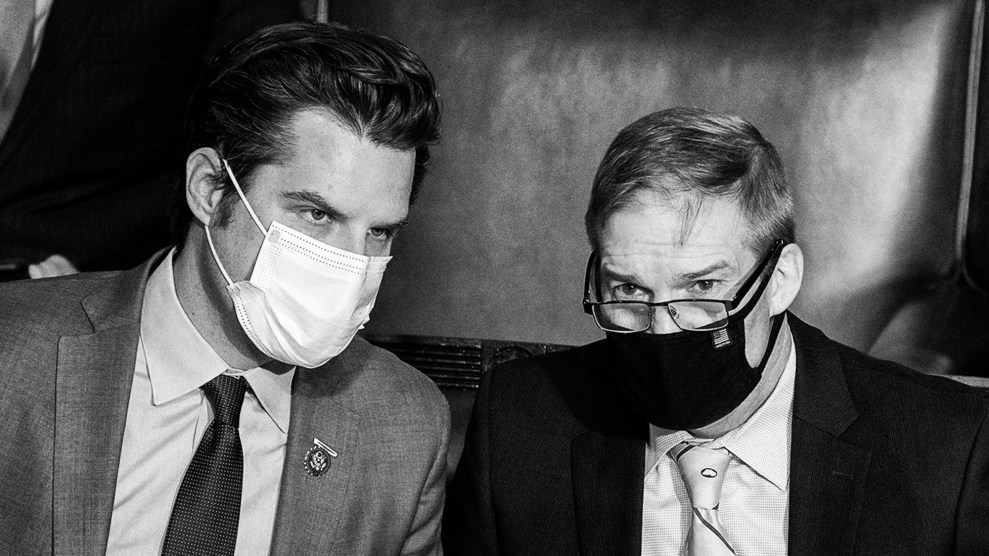 On Wednesday, Donald Trump—an egotist who loves to boast he’s the best of this or has the most of that—set a new record in American history: most-impeached president.

Democrats leading the charge only had to ask: Were you paying attention?

In a bipartisan vote, the House indicted Trump for inciting the murderous attack on the US Capitol a week earlier. The case was pretty straightforward. For weeks following the election, Trump hyped the bogus claim that the election was fraudulent, tried to steal a victory by leaning on local election officials to alter or throw out certified results, pushed his vice president to overturn the electoral vote count, and encouraged his riled-up followers to descend upon Congress to stop the fictitious steal. Plus, Trump did nothing to stop the ransacking of the Capitol once it began. It was very damning stuff. Democrats leading the charge had only to ask: Were you paying attention?

To sum up the case, Rep. Jamie Raskin (D-Md.), the lead House impeachment manager, simply cited a straightforward statement from Rep. Liz Cheney (R-Wyo.), the third-ranking GOPer in the House, who supported impeachment: “The president of the United States summoned this mob, assembled the mob, and lit the flame of this attack. Everything that followed was his doing. None of this would have happened without the president.”

The Republicans had a tougher assignment, and they could not figure out how to present a coherent message. This failure is a reflection of how Trump and Trumpism continue to cast a shadow over the party and how it could come to cause a divide within the GOP, as Republicans endeavor to figure out what to do in the aftermath of Trump’s defeat and the bloody insurrection he provoked.

Republican House leader Kevin McCarthy (R-Calif.) tried to use the impeachment debate to chart a post-Trump course for his party. He assailed the violent attack on the Capitol as “un-democratic, un-American, and criminal,” decrying “mob law” for “trying to interfere with constitutional law.” Shooting down the latest conspiracy theory on the right, he pointed out “there’s absolutely no evidence” antifa caused the riot. And he squarely blamed Trump: “The president bears responsibility for Wednesday’s attack on Congress by mob rioters. He should have immediately denounced the mob when he saw what was unfolding.” He called on Trump to “accept his share of responsibility.”

Here was the top House Republican acknowledging reality: The leader of his party had triggered a deadly raid on Congress.

Though McCarthy was not in favor of impeachment—instead he urged a resolution censuring Trump—here was the top House Republican acknowledging reality: The leader of his party had triggered a deadly raid on Congress.

Most of his colleagues who spoke would not do the same.

Rep. Jim Jordan (R-Ohio), the conspiracy-swilling Trump pit bull who is the senior GOPer on the House Judiciary Committee and who Trump awarded the Medal of Freedom days ago, took the lead in fighting back. While Jordan, like many Republican speakers, including McCarthy, called for “unity,” he did so without acknowledging their collective effort to overturn the Electoral College votes to keep Trump in power. (“This call for unity may ring hollow,” McCarthy said. Factcheck: true.) As for blaming Trump for the ransacking of the Capitol? Jordan was having none of this. Throughout the day, he barked at the Democrats, claiming they were obsessed with impeaching Trump due to bitter partisanship and decrying the previous impeachment and the Russia investigation. He claimed this impeachment was about “cancel culture.”

On the House floor, Jordan granted speaking time to one Republican after another who slammed impeachment and sought to deflect attention from Trump’s post-election disinformation campaign that culminated in the seditious assault on the House and Senate. Rep. Andy Biggs (R-Ariz.) compared Democrats to a “beast” that will not be satisfied until it “devours” Trump—warning, “His movement will grow stronger because you will have made him a martyr.” Rep. Louie Gohmert (R-Tex.), who was a leader in the GOP attempt to negate millions of votes in the 2020 election, told Democrats, “You’re destroying this whole experiment in self-government.” Rep. Matt Gaetz (R-Fla.) complained that House Speaker Nancy Pelosi had torn up a copy of a Trump State of the Union speech—as if that were somehow related to neo-Nazis, white supremacists, Christian insurrectionists, and extreme militants raiding Congress. But Rep. Ken Buck (R-Colo.) perhaps topped them all when he asserted that “Americans were frustrated” by the Russia investigation, by boycotts of the Trump inauguration, and by “socialists in Hollywood” who opposed Trump, name-checking Robert De Niro, Madonna, and Kathy Griffin. It seemed as if Buck was justifying the violent passions of the mob that overran the Capitol.

As one GOPer after another praised Trump as their Dear Leader who had made America great again—with barely a mention of the thousands of Americans dying daily due to the pandemic Trump failed to control—it was a bizarre spectacle. Though the top Republican in the House pointed out Trump’s misconduct, most of his soldiers refused to admit Trump had done anything wrong. They castigated Democrats for having encouraged violence (the BLM movement, of course) and for having created a divisive political culture with their resistance to Trump. At one point, Raskin shot back, “It’s a bit much to be hearing that these people would not be trying to destroy our government and kill us, if we just weren’t so mean to them.”

The idea of championing truth—that seemed radical, amid a cavalcade of distraction and deception.

It became clear that most of the House GOP caucus is still living on Planet Trump. This is not a big surprise. Nearly two-thirds of them did support Trump’s scheme to block the electoral vote count. But even in the aftermath of the horrific attack and the failure of Trump’s coup-like campaign to remain in power, they were whole-heartedly and enthusiastically sticking with Trump. No retreat. No surrender. No shame. They defended his (and their) assault on the election. They showed little concern that his (and their) post-election disinformation crusade had resulted in death and destruction—and that a threat from violent pro-Trump seditionists still remained. For them, Trumpism—despite its lies, its disregard for laws, rules, and decency—still triumphed.

It was remarkable to hear one Republican House member, Rep. Jaime Herrera Beutler (R-Wash.), say during the debate, “Truth has no shadows where darkness can hide…I’m choosing truth. It’s the only way to defeat fear.” The idea of championing truth—that seemed radical, amid a cavalcade of distraction and deception. She was one of the 10 House Republicans who voted for impeachment.

Amid this (mostly) all-out celebration of Trump on the Republican side, McCarthy, who has long been a loyal Trump henchman, did offer his party a path forward other than unyielding and total allegiance to Trump and the dark forces of Trumpism. By and large, the rank-and-file Republicans said, “No thanks.” This indicates the party could be in for a rough internal squabble ahead—and that many of its key members believe its future resides in Trumpism, even possibly without Trump. In the Trump years, the GOP became a cult of personality devoted to a TV performer-turned-demagogue and adopted an extreme operating principle: The only reality is Trump’s reality. In the final days of Trump’s dangerous presidency—when much of the nation has finally come to realize that his deceit and authoritarian desires are a true threat—these Republicans will stay as Trump’s suckerfish, remaining attached to his wounded body, as he heads into new waters.