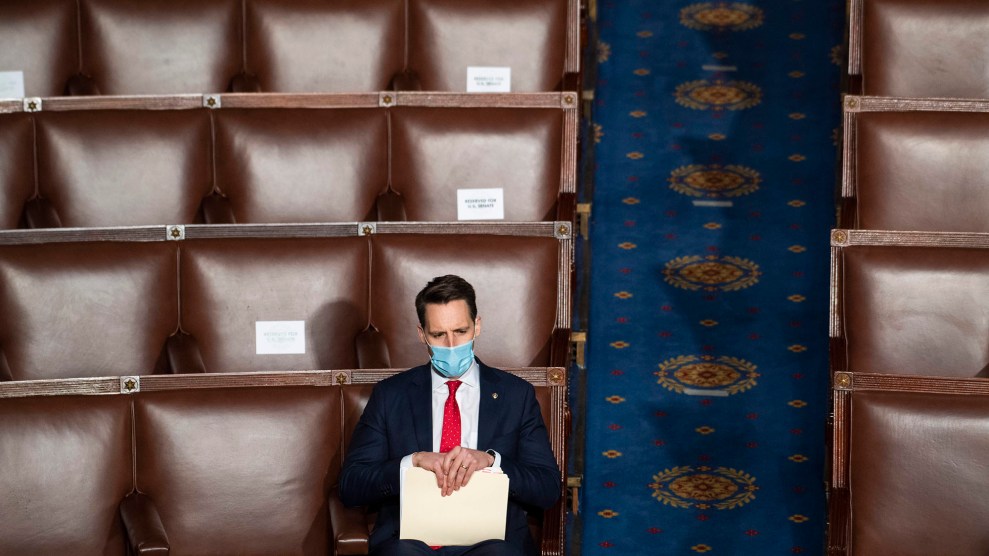 Josh Hawley isn’t sorry about challenging the result of the 2020 election. In an interview with CNN’s Manu Raju on Friday, the Republican senator from Missouri attempted to defend his actions in the lead-up to the January 6 insurrection at the Capitol, accusing his critics of distorting his words and unfairly villainizing him.

Asked about how the rioters and rallygoers thought they could change the electoral results, pointing to his and other Republican objections, Hawley claimed: “I was very clear from the beginning that I was never attempting to overturn the election.”

When he challenged the legitimacy of Joe Biden’s Electoral College win in the Senate and voted to reject the results of the election in Arizona and Pennsylvania, Hawley explained Friday, he merely “gave voice” to Missourians who were concerned about allegations of fraud. “I was very clear from the beginning that I was never attempting to overturn the election,” he said.

That is just false. Let’s roll the tape.

On November 6, Hawley appeared on Tucker Carlson’s Fox News show to call out “deeply disturbing” allegations of election malfeasance by Democrats. “We’ve seen reports in Detroit about ballots brought in there, new ballots in the middle of the night,” Hawley said. “We’ve seen it in Philadelphia.” (Hawley believed these rumors demanded serious investigation, though had he investigated them on Google he would have learned that what was being unloaded in the middle of the night in Detroit was camera equipment.)

By December 1, Hawley was objecting to fast-tracking the confirmation process on Joe Biden’s cabinet nominees on the grounds that no one could say for sure who the president would be. It would be rash, he told Fox News’ Laura Ingraham, to do so “before this election has been certified, before the Electoral College has even met, while there are important appeals and legal cases ongoing, including the one involving Pennsylvania that I hope the U.S. Supreme Court will hear.” At least four times in that interview he raised doubts that Biden would actually be sworn in—”if Joe Biden ends up being sworn in as president,” he said; “If Joe Biden ends up as president,” he said; “If Joe Biden—if he is president come January,” he said; “should he actually be sworn in as president,” he said.

That Pennsylvania lawsuit—which called for all ballots cast by mail in the state to be thrown out, in an attempt to overturn the election result in the state through mass disenfranchisement—was rejected by the Supreme Court. When Missouri’s attorney general filed an amicus brief in support of another effort to throw out Pennsylvania’s election results (along with the results of three other states), Hawley cheered that on too.

Four days after Texas’ Pennsylvania challenge was thrown out (by, among other people, Chief Justice John Roberts, whom Hawley once clerked for), and one day after the Electoral College itself met to formally make Biden president-elect, the result of the election, was still just a known unknown to Josh Hawley.

“If Joe Biden is sworn in as president in January, Big Tech is going to run this administration” he said during another Fox News appearance on December 15.

People noticed that Hawley was still acting as if the election was up for grabs—he was even asked about it. On January 4, as he prepared to contest the results of the election at the Capitol, Fox News’ Bret Baier asked Hawley very directly to say that the election result would stand.

“Are you trying to say that as of January 20, that President Trump will be president?” Baier asked.

“Well, Bret, it depends on what happens on Wednesday,” Hawley said. “It’s why we have the debate.”

It depends on what happens on Wednesday.

Hawley wasn’t wiling to acknowledge Biden would be president, even as the bleachers were already in place for his inauguration. That’s because the whole point of a stunt like the one he was pulling was the ambiguity of it—to be able to play with fire and get away with it, to raise money and build his brand. He did it under the guise of speaking for (some of) his constituents, but those constituents had been hearing false allegations about election irregularities straight from their senator. In an ideal world, perhaps, everyone else would have simply cooperated with this magic trick and we would have all gotten on with our work without anyone getting killed by a fire extinguisher. But people did take him seriously—a mistake that, as I reported in the magazine, many of his colleagues and past admirers seem determined not to make again.