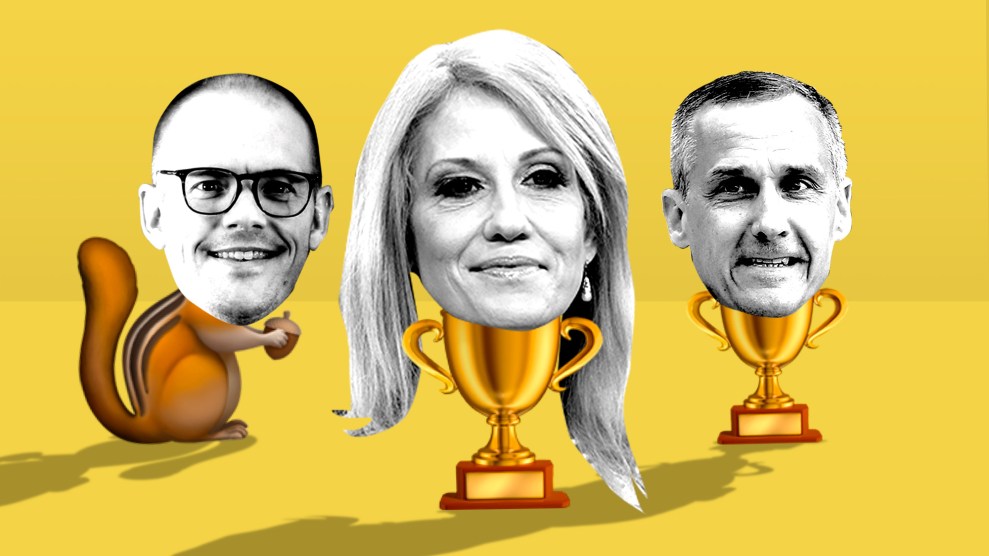 In the time between his election loss and Joe Biden’s inauguration, Donald Trump rushed through dozens of federal appointments. Most rewarded loyalists with cushy, largely ceremonial positions on boards and commissions. But many were “burrowed in,” a process wherein a lame-duck president converts political appointees into civil servants who the next president will have a hard time getting rid of.

Both Republican and Democratic administrations have used the system for decades, but Trump took the practice to new extremes. It is hard to say exactly how many political appointees Trump requested for a transfer to a civil service position, since the data is only updated on a quarterly basis; Business Insider recently reported that Trump had converted at least 26 political appointees to career positions. Max Stier, the president of the Partnership for Public Service, a nonprofit that tracks federal government management issues, says the last months of Trump’s presidency were far from normal. “Burrowing in general is a problem,” Stier says. “And I think that the likelihood is that there’s quite a bit more problems here then we’ve seen in the past.”

A majority of the problems lie in the Office of Personnel Management, the federal agency that manages employment for civil servants. Typically, the OPM—an independent agency—is supposed to ensure that a political appointee converted into a civil servant by the president is actually qualified for the position. But Trump, on his way out of the White House, upended OPM’s leadership and replaced them with loyalists. “There’s been damage done there,” Stier says. “And so it’s not clear whether OPM is a fair referee itself.”

Here are a few of the holdovers and their new gigs:

Kellyanne Conway, US Air Force Academy’s Board of Visitors: As a White House adviser, Conway was one of Trump’s most shameless apologists. In December, her ability to soar on a cushion of “alternative facts” earned her a slot advising the academy that trains cadets for the Air Force—and the Space Force.

Brandon Middleton, Chief counsel of the Department of Energy’s Environmental Management Consolidated Business Center: Middleton wasn’t a well-known name in Trumpworld, but he played an important behind-the-scenes role in rolling back environmental regulations and fighting Obama-era climate policies as the deputy solicitor for water resources in the Department of the Interior. In September, Trump made him a top lawyer in the office that runs the biggest environmental cleanup program in the world.

Elaine Chao, John F. Kennedy Center for the Performing Arts Board of Trustees: Before she jumped the sinking ship of the Trump administration in January, the transportation secretary (who’s married to Sen. Mitch McConnell) scored this cushy gig. If Kid Rock is ever honored at the Kennedy Center, you know who to blame.

Corey Lewandowski, Defense Business Board: Even though Lewandowski has no military background beyond a course at the Naval War College and was fired from Trump’s financially disarrayed 2016 campaign, he was nonetheless appointed to the panel that gives the Pentagon business management tips. (Update, 2/2/2021: The Wall Street Journal reports that Defense Secretary Lloyd Austin has dismissed hundreds of members of the Pentagon’s policy advisory boards, including Lewandowski on the Defense Business Board)

Ginni Thomas and Matt Schlapp, Library of Congress Trust Fund Board: Throughout Trump’s presidency, Thomas (who’s married to Supreme Court Justice Clarence Thomas) posted anti-Semitic and baseless conspiracy theories on her Facebook page. Schlapp is chair of the American Conservative Union. (His wife, Mercedes, was Trump’s director of strategic communications.) Thomas cheered on the January 6 Trump rally that turned into a deadly day of insurrection; afterward, Schlapp tried to distance himself from Trump on Fox News. Maybe they’ll find themselves on the same page as they help to manage donations to the nation’s largest library.

Christopher Prandoni, Administrative law judge at the Department of the Interior: Environmental groups were alarmed at Prandoni’s appointment last April to this supposedly nonpartisan position focused on settling land and resource disputes. After only three years out of law school, Prandoni’s experience included working as a legislative assistant for Sen. Mike Lee (R-Utah), whom the Center for Biological Diversity named the number one “public lands enemy” in Congress.

Darren Beattie, Commission for the Preservation of America’s Heritage Abroad: In 2018, Beattie was fired as a White House speechwriter when it came out that he had attended a white nationalist gathering two years earlier, appearing on a panel with the founder of an anti-immigration site labeled as a hate group by the Southern Poverty Law Center. Naturally, Trump appointed him to the commission that, among other things, helps to preserve sites related to the Holocaust.

Michael Ellis, General counsel of the National Security Council: Ellis, a former Republican political operative and staffer for Rep. Devin Nunes (R-Calif.), joined Trump’s National Security Council in a political spot back in 2017, but was nominated to the general counsel job, a senior civil servant position, in November. His appointment drew scrutiny from the intelligence community who criticized Trump for installing one of his top political loyalists into a key intelligence position typically given to nonpartisan career civil servants. On the day Biden was inaugurated , NSA director Gen. Paul Nakasone placed Ellis on administrative leave.

Michael Savage, Presidio Trust Board of Directors: The right-wing radio host’s greatest hits include losing his MSNBC show after telling a caller to “get AIDS and die” and calling for House Speaker Nancy Pelosi to be “arrested and deported.” The former herbalist now has a seat on the board overseeing the famed 1,200-acre federal park in San Francisco—which Pelosi had helped create in the mid-1990s.

Correction: An earlier version of this story included John Lott in the list of burrowed appointees. But on January 21, Lott reportedly resigned from his position at the Department of Justice. Lott, an economist and gun rights advocate best known for his debunked theory that easier access to firearms reduces crime, was appointed in November to an advisory in the DOJ that drew scrutiny from gun violence researchers and Senate Democrats.