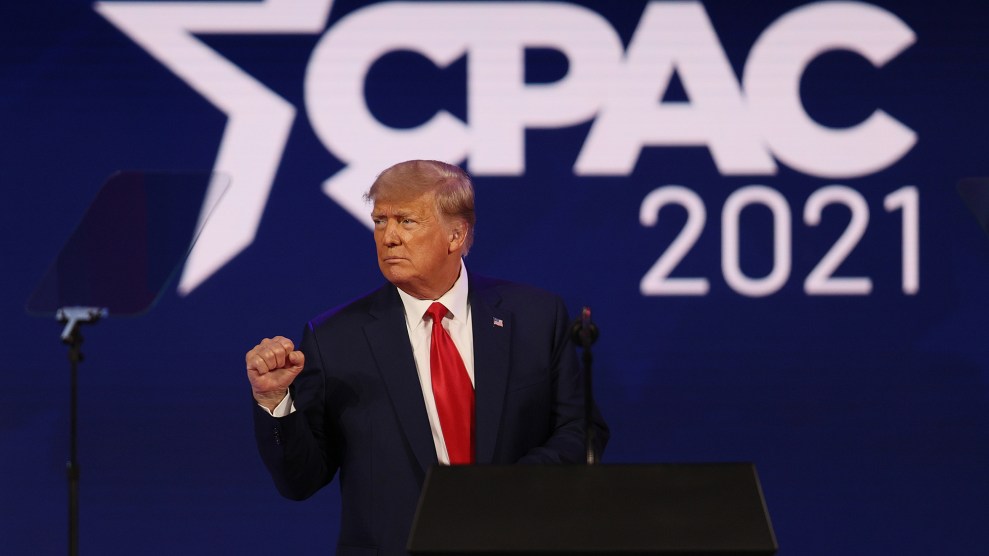 Former President Donald Trump intimated a potential 2024 presidential run during his first speech since leaving office last month and surviving a second impeachment trial in February. For over ninety minutes, Trump used his appearance at the Conservative Political Action Conference in Orlando on Sunday as an opportunity to defend his own record, portray President Joe Biden and Democrats as socialists, and offer up red meat in the culture war to his most ardent supporters. But most of all, he relished being in the spotlight again, and used it to insist falsely that he won the 2020 election—the dangerous lie at the heart of the January 6 attack on the US Capitol.

Democrats “just lost the White House,” Trump said, despite his having lost the 2020 presidential election by 74 Electoral College votes and 7 million in the popular vote. “I may even decide to beat them for a third time,” he said, as the crowd cheered.

Trump also threw cold water on rumors that the divisions within the Republican party would result in his creating a new political party. “We’re not starting new parties,” Trump said. “We have the Republican Party. It’s going to unite and be stronger than ever before.”

Trump may have faded from public view since leaving office, facing impeachment for his role in fomenting the January 6 siege on the Capitol, and deprived of access to Twitter, his favorite platform to speak to supporters and direct media coverage. (After the January 6 insurrection, Twitter banned him first temporarily and then permanently.) Yet, despite his diminished visibility, the party has not abandoned him.

Local Republican chapters have retaliated against Republicans who voted to impeach and convict Trump. Rep. Liz Cheney (R-Wy.) faced, but survived, a vote to strip her of her role in House GOP leadership after she voted to impeach Trump. During a Sunday appearance on CBS’ Face the Nation, Republican National Committee Chairwoman Ronna McDaniel welcomed Trump’s help in winning back Republican majorities in the House and Senate in 2022 and said Republicans “overwhelmingly” supported Trump’s performance as president. “I do know he’s committed to helping us win back majorities in 2022,” she said, “which is, of course, what I’m focused on right now.”

The audience booed as Trump listed the names of Republicans in the House and Senate who had voted to impeach and convict him. He urged his supporters to “get rid of them all” in the next election and vowed to help elect strong conservatives in the 2022 midterms. Trump also reiterated that the party is united behind him—with the exception of a “handful” of establishment members of the GOP in Washington.

Clearly enjoying his return to the public sphere and basking in the attention of cheering supporters, the former president returned to his usual laundry list of grievances and causes, especially immigration. He maligned immigrants and touted his own record on the southern border—a record that includes separating children from their parents, making it harder for people seeking asylum, and ramping up every aspect the system’s cruelty to immigrants.

Trump also brought back his attacks on Biden from the campaign trail last year, mocking him as senile and clueless. He disparaged windmills, the Paris Climate Agreement, China, and, always, Democrats, whom he described as potentially leading the country first to socialism and then to communism. When it came to the coronavirus, a pandemic his administration did not address effectively, he took credit for the country’s progress on vaccine distribution, which has ramped up in the last month under Biden.

Finally, returning to his favorite theme, Trump attacked the 2020 election as being stolen by corrupt Democrats and urged Republicans to pass laws that would restrict voting to a single day and all but eliminate absentee voting. “This election was rigged and the Supreme Court and other courts didn’t want to do anything about it,” he said. These allegations contradict the facts; even election experts in Trump’s own administration called the 2020 election “the most secure in American history.”

The crowd ate up Trump’s speech, at one point chanting “We love you!” Even the sainted Ronald Reagan, Trump said in response, never received a chant like that.