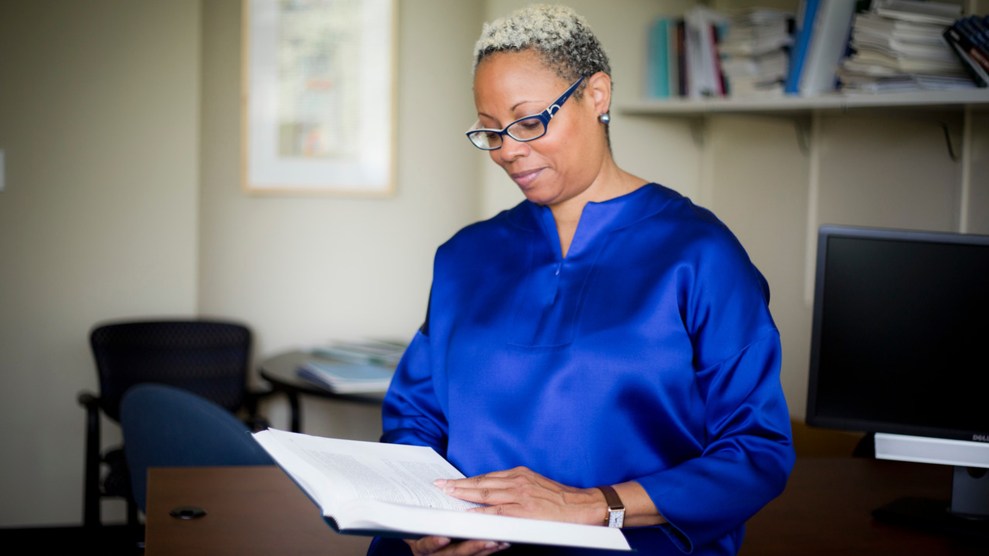 Emory University law professor Dorothy Brown saw a lot as a girl growing up in the South Bronx, including a white cop beating a handcuffed Black detainee in the backseat of a squad car. Her father, enviably named James Brown, was a plumber who worked for a private firm with no benefits because the union that controlled local public sector jobs didn’t much appreciate the color of his skin. Brown’s mom, Dottie, worked as a nurse and a seamstress. With a modest loan from her father’s white boss, the family was able to purchase a home in 1964, which was fortunate given that the federal government had yet to outlaw racial discrimination in housing, and government-insured bank mortgages were still largely unavailable to Black families. Brown chose to pursue tax law, she writes, because she figured it was a field in which she could avoid dealing with race.

Boy, was she mistaken.

Race was relentlessly in her face, particularly as the lone Black woman law professor at George Mason—now Antonin Scalia School of Law. The white faculty were clueless on race, she writes. One year, administrators failed to set aside money, as they had for her white colleagues, for Brown to hire a research assistant—they’d “forgotten,” and now it was too late.

Eventually, inspired by an article by her late mentor Jerome Culp, a Duke law professor  who advocated “black legal scholarship,” Brown set out to determine how the tax code works against people like her parents, who paid higher taxes than comparably earning white couples with sole breadwinners. She found that when white people get to write the rules based on their cultural and financial interests, things tend not to work out so great for the groups excluded from that rule-making process. In her new book, The Whiteness of Wealth, Brown digs deep into how tax policies related to most aspects of American life—housing, marriage, work, education, etc—elevate white prosperity at the expense, wittingly or otherwise, of Black wealth and opportunity. Naturally, I had questions.

You write that you got into tax law because you thought it would be race-blind. Why was that important to you?

Because living in the South Bronx I saw racism every single day—I didn’t want a job that overtly dealt with racism. It was too much emotionally for me to handle.

You actually took a break from practicing law to work on Wall Street for a while. What was that like?

As I talk about in my book, I worked in municipal finance working with state and local political officials, often from urban areas, so the municipal finance department I worked at was very racially diverse with several Black bankers as colleagues. The opposite was true in the corporate finance side. I only met one Black corporate finance investment banker during my stint on Wall Street.

It struck me how the disparate racial impacts of the tax code didn’t come to your attention in law school or in your subsequent legal work, but only later, when you became an academic. Why was that?

Because law school generally and NYU Law’s tax program specifically approached subjects from a colorblind perspective. The faculty are generally white and don’t understand race in America and what impact that could have on the effect of tax laws, so they don’t talk about it in their classes. I never had a Black faculty member while at NYU, and I don’t think (you can check me) that they have ever had a full-time faculty member teaching tax who wasn’t white—certainly none who were Black.

In terms of economic impact, what are the top three ways our tax code disfavors Black families?

Your working parents received a marriage penalty: Because they earned roughly equal amounts, they owed more in taxes than, in your example, a white family of comparable income where one spouse makes all the money. Tell me about that.

Had they filed as individuals, my parents would have paid less and the white couple would have paid more. The Tax Reform Act of 1969—legislation passed with zero Black members on the House Ways and Means Committee—harmed couples making roughly equivalent income. The way that the tax structure was set up meant that married Black couples like my parents, with two working spouses in which one partner makes at least 20 percent of the family’s total income, will pay a marriage penalty.

That single-worker couple enjoys other economic advantages, too, such as?

The value of services the stay-at-home spouse provides to the family is tax-free. The stay-at-home spouse can take care of whatever the working spouse needs and help that spouse advance with their career. The tax code treats a plumber and a nurse, who have to pay for child care and commuting expenses with after-tax income, the same as a high-earner who earns their combined salary and has a spouse to stay home and handle things like childcare.

How did this rule come to pass, and what makes it racially discriminatory?

I think most people get that our tax system favors rich over poor and investors over workers. But the statutory language no longer overtly discriminates. To what degree are the disparities you describe the legacy of old racist laws that prevented Black families from amassing wealth and advantage, versus the result of present-day racism, as opposed to classism?

It’s a bit of both—historical racism coupled with current-day racism. It can’t be class when my research shows that Black Americans regardless of income are disadvantaged.

You talk about how Black homeowners, whether they realize it or not, face a big economic dilemma if they want their kids to grow up in a Black or mixed neighborhood that reflects their ethnic culture. Would you summarize that dilemma for us?

Home values don’t appreciate in those neighborhoods as much as home values in homogeneous white neighborhoods. So living in a racially diverse or all-Black neighborhood means your neighbors won’t call the cops when you’re trying to get into your own home because they don’t think you live there, BUT you won’t have the financial rewards that you’d have if you were one of the only Black families living in an all-white neighborhood.

Do you think white America is oblivious to the obstacles that highly driven and well-educated Black Americans face in their ability to build and maintain wealth, and to provide a financial cushion for their children?

I think most white Americans think the problem with the racial wealth gap is due to a disproportionate percentage of Blacks living in poverty. While it is true that roughly 22 percent of Blacks live in poverty, that means 78 percent do not. Why white people don’t focus on the 78 percent is a complicated question. Is it that they don’t know? That they don’t want to know? That ignorance is bliss?

In a 1963 letter from Birmingham Jail, Dr. Martin Luther King Jr. called white moderates the “great stumbling block” in the Black “stride toward freedom”—”more devoted to ‘order’ than justice.” Does that ring true today, in terms of white progressives who profess to support equal opportunities, the Black Lives Matter movement, etc?

Absolutely. I also think of the companies with “Black Lives Matter” signs and ads—but in my home state of Georgia they’re not opposing the Republican efforts to stop Black Americans from voting. Black voters don’t seem to matter to them.

As Democratic presidential hopefuls, Mike Bloomberg and Pete Buttigieg each explained the racial achievement gaps in their cities by saying Black families lacked the experience to understand the value of a good education. You write that this is “entirely incorrect.” Would you elaborate, and talk about why Black students struggle to get the same return on investment in higher education—and the same mobility boost—that white college kids enjoy.

Research shows that Black families value education very highly. As far as return on investment—60 percent of Black students who attend college don’t graduate, compared with only 40 percent of white students who attend but don’t graduate. There is no return if there is no degree, and the majority of Black college students fail to graduate with a degree—and being able to afford college is a key part of the reason why.

It’s early in this administration, but given how he’s been talking and the policies he’s pushed, I feel like Joe Biden is shaping up as the most pro-equality, pro-Black president we’ve perhaps ever had. What do you think he and the Democrats have done right so far? And how, given the political constraints they face, could they do a better job addressing the problems you raise?

President Biden’s first executive order was about disaggregating data by race and ethnicity (among other categories). That is terrific! It is my hope that his administration will publish race and tax statistics and include a race analysis in any tax reform efforts. However, I don’t think he has the right personnel to accomplish that. In other words, he needs to put in the government people who have a history of centering race in their analyses—or at least including race—and that’s not what I’m seeing at the Treasury.

The Whiteness of Wealth goes on sale in the United States on Tuesday, March 23.