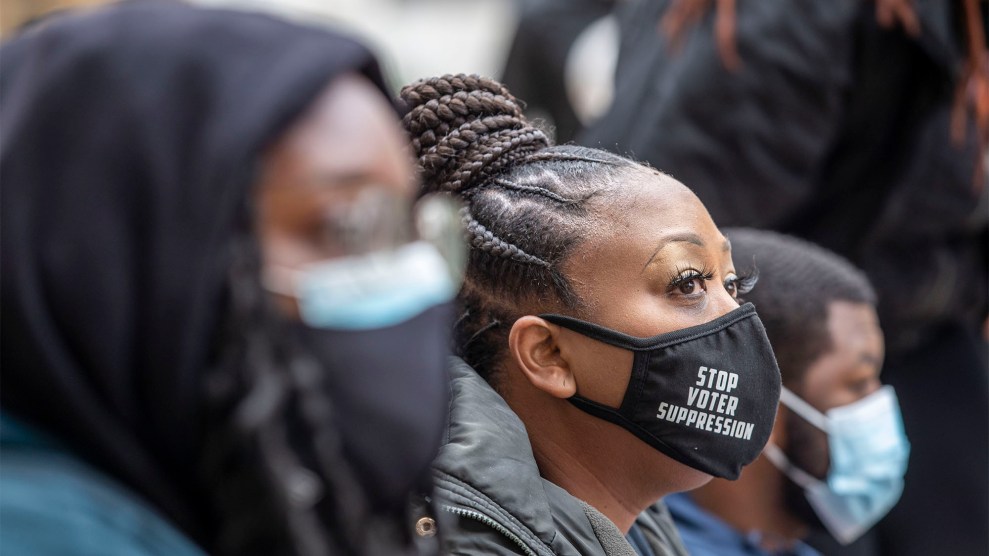 Demonstrators chained together protest a House bill restricting voting rights outside of the Georgia State Capitol Building in Atlanta on March 1.Alyssa Pointer/Atlanta Journal-Constitution via AP

Following unexpected Democratic victories in Georgia in November and January, Republicans in the state Senate voted Monday to significantly curtail the right to vote.

On Monday afternoon, the legislators approved a bill repealing no-excuse absentee voting, which 1.3 million voters used to cast ballots by mail in 2020, including 450,000 Republicans. They were also set to consider a bill on Monday evening ending automatic voter registration, which 5 million of the state’s 7.6 million voters used to register since it was implemented in 2016.

The Senate bills follow the passage of a sweeping House bill last week that cuts weekend voting days—including on Sundays, when Black churches hold “Souls to the Polls” get-out-the-vote drives—restricts the use of mail ballot drop boxes, prevents counties from accepting grants from nonprofits to improve their elections, adds new voter ID requirements for mail ballots, gives election official less time to send out mail ballots and voters less time to return them, and even makes it a crime to distribute food and water to voters waiting in line.

Collectively, these bills represent the most sustained effort to roll back access to the ballot in Georgia since the Jim Crow era. The same is true nationally, where Republicans have introduced 253 bills in 43 states in the first two months of this year to make it harder to vote.

“We are seeing again and again this version of Jim Crow in a suit and tie,” Stacey Abrams, the Democratic gubernatorial nominee in 2018 and founder of the voting rights group Fair Fight Action, told me, “because it is designed explicitly for the same reason as Jim Crow did, to block communities of color from active participation in choosing the leadership that will guide their democracy.”

Republican Secretary of State Brad Raffensperger notes in every press release he issues that “Georgia is recognized as a national leader in elections” because “it was the first state in the country to implement the trifecta of automatic voter registration, at least 16 days of early voting (which has been called the ‘gold standard’), and no excuse absentee voting.” If signed by Republican Gov. Brian Kemp, the bills from the Georgia legislature would reduce or eliminate all three of these.

“We are seeing again and again this version of Jim Crow in a suit and tie, because it is designed explicitly for the same reason as Jim Crow,” says Stacey Abrams.

Georgia Republicans wrote every aspect of the state’s voting laws and are only changing them after Democrats carried the state in November and won two US Senate races in January. The bills passed by the legislature target the voting methods most used by Democrats and voters of color while giving preferential treatment to GOP-aligned constituencies. “Republicans got the message that they were in a political death spiral,” Democratic Rep. Renitta Shannon said on the House floor last week. “And now they’re doing anything they can to silence the voices of Black and Brown voters specifically because they largely powered these wins.”

The weekend voting days that would be cut by Republicans were also disproportionately used by voters of color. Black voters comprised 27 percent of early voters in November 2020 but nearly 35 percent of voters who cast ballots on weekend voting days that could be eliminated by Georgia Republicans. “Individuals identifying as white were the least likely to cast their vote on weekends (8.6%), compared to those identifying as Asian (13.1%), African-American (11.8%), and Hispanic (11.4%),” according to the Center for New Data.

Similarly, automatic registration is under fire after more than 1 million new voters were added to the rolls between 2016 and 2020—two-thirds of them voters of color, a demographic that voted 70 percent for Biden.

“Republicans got the message that they were in a political death spiral,” said Rep. Renitta Shannon. “And now they’re doing anything they can to silence the voices of Black and Brown voters.”

“In the last two election cycles, we saw a dramatic increase in the number of voters of color who voted by mail, the number of young people who used early voting, the number of African Americans who voted on Saturday and Sunday,” says Abrams. “We saw unprecedented levels of turnout across the board. And so every single metric of voter access that has been a good in Georgia is now under attack.”

She says the legislature is intentionally trying to reduce turnout among voters of color. “This is entirely driven by the existential crisis of a Republican Party that has decided that rather than adapt to the changing needs of the populace, it is easier to stop the people from participating.”

The House and Senate bills must be reconciled before being sent to Kemp, who’s been mum on whether he’ll sign them. (Republican Lieutenant Gov. Geoff Duncan, who usually oversees the proceedings of the Senate, refused to preside over the vote repealing no-excuse absentee voting, which he opposed.) It’s possible some of the most extreme provisions—such as the Senate measures repealing automatic registration and no-excuse absentee voting, and the House measure cutting early voting—could be removed in legislative negotiations. It’s also possible the bill could incorporate the most extreme elements from the House and Senate legislation, becoming a Frankenstein monster that limits mail voting while also cutting early voting, both of which would almost certainly lead to longer lines at the polls. Georgia already had 11-hour lines to vote during the presidential election, and voters of color waited eight times as long as whites to vote during the June 2020 presidential primary.

Some establishment Georgia Republicans, like Raffensperger, stood up to Trump and defended the integrity of their state’s presidential election, but the passage of the legislative bills shows the extent to which Trump’s Big Lie that the election was stolen has been weaponized by state-level Republicans to make it harder for Democratic constituencies to vote. (The bills would also take away election-related powers from the secretary of state’s office and transfer them to the GOP-controlled legislature.) When Trump’s attempt to overturn the election failed, “the Big Lie had to transform itself and then became election integrity,” says Abrams. “The only way to win is to tell this lie again and again until it sounds like truth, and then to use racism and bigotry to try to prevent voters from participating and holding them accountable.”

The GOP’s attack on voting rights is increasing pressure on Democrats in the US Congress to pass bills protecting voting rights, namely the For the People Act, which passed the House last week, and the John Lewis Voting Rights Act, which House Majority Whip James Clyburn said on Sunday he wanted on Biden’s desk by the 56th anniversary of the signing of the Voting Rights Act on August 6.

“Republicans unchecked are creating an existential crisis for democracy,” says Abrams. “We have to ensure that Republicans cannot deny eligible voters their ability to engage in democracy.”

Update 03/09: Senate Republicans did not take up legislation repealing automatic voter registration on Monday night, the deadline for passing legislation and sending it to the state House. After a highly contentious three-hour debate over repealing no-excuse absentee voting, which barely cleared the chamber, Senate Republicans may have run out of time. It’s also not clear whether they had the votes to repeal automatic voter registration.