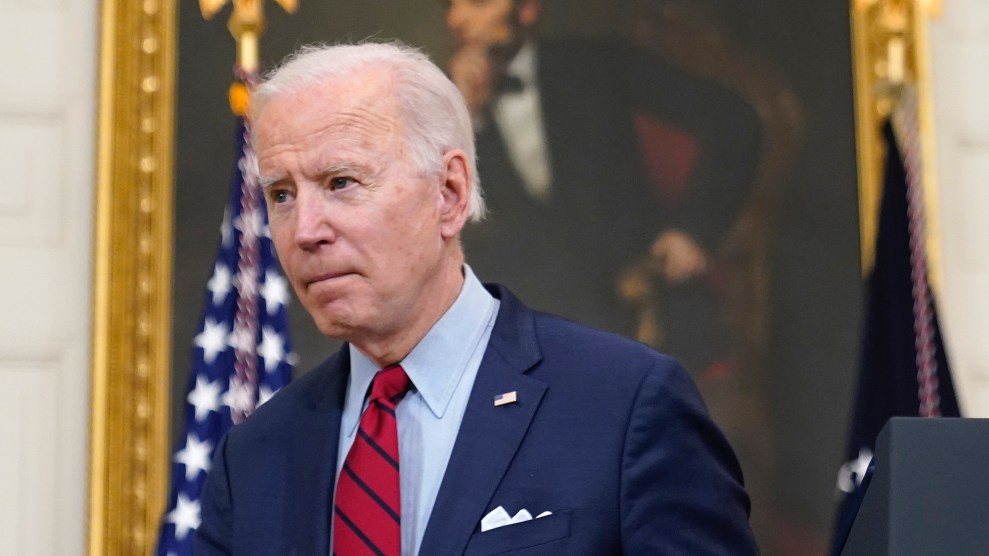 In April 2013, then-Vice President Joe Biden sat in his office just off the Senate floor as he watched the chamber reject an expansion of background checks for gun sales. Gabby Giffords, the former member of Congress from Arizona who’d nearly died in a mass shooting the previous year, sat with him, growing livid as a minority of senators filibustered to kill a measure 90 percent of Americans supported.

The outcome was a failure for Biden, who’d helped broker the bipartisan amendment with Sens. Joe Manchin (D-W.V.) and Pat Toomey (R-Pa.) in the wake of the 2012 Sandy Hook Elementary School massacre that left 26 dead. But he told an outraged Giffords that day that the failure to expand background checks wasn’t an end, but a beginning. In Biden’s formulation, the filibuster would show the extent to which Congress and vast swaths of the Republican Party had been corrupted by the National Rifle Association. Americans, Biden predicted, were going to be angry in the way that he and Giffords were angry then.

But eight years later, no meaningful gun control legislation has passed Congress. The filibuster had revealed something else: A minority could hold the legislative demands of an overwhelming majority hostage.

There are few policy matters Biden holds as dear as his quest for gun control. On the campaign trail, he’d often brag that he’d “beaten the NRA twice”: As a US senator from Delaware, Biden had led the chamber to pass bills that established the federal background check system in 1993 and a 10-year ban on assault weapons in 1994. After the Sandy Hook tragedy, Biden, who had also tragically lost a child, personally coached and comforted grieving Newtown families who demanded Congress take action.

In his remarks following Monday’s shooting at a Boulder, Colorado, grocery story that left 10 dead, Biden implored Congress to pass the gun control measures he has sought since his last stint in the White House: universal background checks and a ban on assault-style weapons and high-capacity magazines. “This is not and should not be a partisan issue,” he said.

But it is a partisan issue on Capitol Hill. Republicans, almost uniformly, do not support any of the measures Biden called for. The dynamics are a test of Biden’s preference for bipartisanship, the existence of the filibuster, and the legacy Biden wants to leave.

As a presidential candidate, Biden vowed a return to “civility” predicated on the “epiphany” Republican lawmakers would have once Donald Trump left office. As a president, Biden has used the yardstick of bipartisan support across voters, not GOP members of Congress, to measure his success on that front. He rammed his $1.9 trillion COVID rescue plan through Congress without a single Republican vote, but touted the high approval rating the plan got from right-leaning voters and GOP mayors and governors across the country.

The politics of gun control aren’t dissimilar. Public support for expanding background checks generally hovers around 90 percent. Favorability among Republican voters is lower, but just slightly: A March Morning Consult poll found that more than three-quarters of GOP voters back the measure. Among GOP lawmakers, however, support is close to nil. Only three GOP House members voted for their chamber’s universal background check bill earlier this month. Only two of the four Republican senators who voted for Manchin-Toomey remain in Congress. One, Sen. Susan Collins (R-Maine), has indicated she might not be willing to back the House bill. The other, Sen. Pat Toomey (R-Pa.), has cast doubt on finding GOP votes besides his own.

In elections since Manchin-Toomey’s failure, NRA-sympathetic Republicans in swing districts lost their seats to Democrats who back stricter gun laws. The NRA declared bankruptcy earlier this year and has been outspent by pro-gun control groups in recent cycles. The 2013 background checks failure “led to an NRA and a gun lobby that’s weakened,” Peter Ambler, executive director of Giffords, the gun control group the former congresswoman founded, told me last month. “We’re winning the political argument.” But the vast majority of Republicans continue to thrive on their anti-gun control rhetoric. Only a handful of GOP lawmakers from blue-leaning suburban districts, like Reps. Brian Fitzpatrick (R-Penn.) and Chris Smith (R-N.Y.), have survived reelection thanks in part to their thorough embrace of gun control.

Sen. Chris Murphy (D-Conn.), who has led on the issue since the Sandy Hook tragedy, told me earlier this month that he’d been doing the “quiet work” to pass a bipartisan background check bill. “It will be difficult, under the current Senate rules, [to pass] changes in our gun laws,” Murphy said. But noted he had been negotiating with President Trump and other GOP lawmakers on a potential bipartisan background check proposal in the aftermath of the 2019 El Paso massacre that killed 26. That plan would have included expanding background checks to gun shows and internet sales, but avoid the centralization of record-keeping—”there are good reasons for that,” Murphy explained, “but also some potential downsides for law enforcement.” Those negotiations ended once the House impeached Trump in September 2019. “It was a proposal made in good faith,” Murphy said. “We’re going to have to figure out whether it’s worth revisiting.”

Other lawmakers, meanwhile, have seized on the crisis to demand an end to the filibuster. Sen. Elizabeth Warren (D-Mass.) tweeted “things won’t get better until Democrats get rid of the filibuster and finally pass gun safety legislation that a huge majority of Americans support.” and her Massachusetts colleague, Sen. Ed Markey (D), noted that the filibuster allows Republicans “to essentially veto” gun bills. “That’s not how a democracy functions, that’s how a democracy dies,” Markey tweeted. Senate Majority Leader Chuck Schumer (D-N.Y.) has not said which legislative path forward he supports. He told reporters Tuesday that will meet with Murphy and other Democrats this week to “figure out the best path forward” on gun legislation. The White House and Democratic leaders are expected to spend the upcoming Senate recess to devise a legislative strategy and talk to lawmakers—including Manchin, who has said he will not support the background checks bill that passed the House earlier this month.

Before the shootings in Atlanta and Boulder, the White House had been telling gun control advocates to wait their turn. Domestic Policy Council Director Susan Rice stressed during meetings with activists last month that addressing the pandemic and the economic crisis it caused would take precedence over the rollout of the administration’s gun policies. Rice said they were looking at sometime in the spring—a frustrating timeline for some activists, who see this rare and likely fleeting moment of unified Democratic government as their one chance to pass legislation.

During his remarks on Tuesday, Biden promised he would use “all the resources at my disposal to keep the American people safe.” Time will tell whether the Senate will do the same.