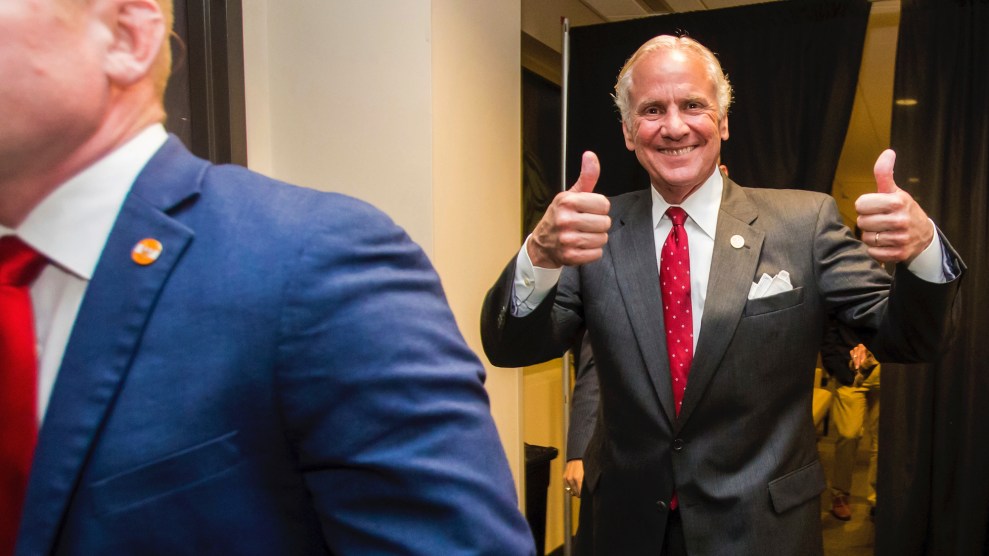 South Carolina will now pay for the privilege of punishing its people twice over. For the past decade, the state has deprived nearly 200,000 residents of health insurance by refusing to accept federal funds to expand Medicaid. Now, it will also turn down federal unemployment insurance as part of an effort to force people back to work.

On Thursday, Republican Gov. Henry McMaster announced that he’s rejecting hundreds in millions in aid for unemployed South Carolinians. It follows a decision by Gov. Greg Gianforte (R-Mont.) earlier this week to do the same. Officials in Wyoming and Georgia are reportedly considering rejecting the extra $300 of weekly unemployment insurance that’s available until September as well. The logic is iffy, at best.

Panic has set in on the right that boosted unemployment is preventing people—particularly restaurant workers—from rejoining the workforce. But there’s little solid evidence that is what’s driving people to stay at home. Many people remain fearful of being exposed to COVID-19, some can’t find jobs as good as the ones they lost, while others, particularly women, have to take care of children whose schools or daycares are not yet fully open.

During the pandemic, companies like Amazon that pay at least $15 an hour and offer health insurance have been able to hire hundreds of thousands of workers for often grueling jobs. “I really don’t think the major factor is the extra unemployment,” Treasury Secretary Janet Yellen said. Conservatives of course steered away from an indictment of meager wages halting hiring. (The average weekly earnings of nonsupervisory workers in the leisure and hospitality sector work out to making $20,628 per year.)

And despite the restaurant worker shortage narrative, the Labor Department actually announced on Friday that 331,000 jobs were added last month in leisure and hospitality, more than any other sector. Only 266,000 jobs were created overall—far short of the roughly 1 million new jobs economists had expected—because of losses in areas like package delivery. Among women, employment fell by 8,000, another sign that the unequal distribution of domestic labor is keeping women from returning to paid jobs.

The economy still remains more than 8 million jobs short of where it was before the pandemic. Heidi Shierholz, the policy director at the progressive Economic Policy Institute, added on Twitter that the full picture is even worse. Had the economy kept growing at its pre-COVID–19 rate, there’d be 11 million more jobs than there are now.

The ongoing economic recovery is exactly why Congress extended supplemental unemployment insurance as part of the American Rescue Plan in March. Instead of taking that money, two Republican governors, and likely more conservatives in the weeks to come, are trying to impoverish their residents back into the workforce.

South Carolina’s own labor department projects that McMaster’s decision will lead to the state losing roughly $600 million in federal assistance. It estimates that if half of people on unemployment go back to work—the best case scenario contemplated in the memo—they’ll only earn $372 million in wages by the time the extra unemployment expires. Those wages, of course, will be paid by employers, not the federal government. It is responsibility politics as scam.

The battle over Medicaid is another recent example of Republican governors turning down money that’s theirs for the taking. Like South Carolina, Georgia and Wyoming haven’t taken advantage of the fact that the Affordable Care Act covers 90 percent of the cost when states expand Medicaid to people who make up to 138 percent of the federal poverty line, about $17,700 for an individual and $36,500 for a family of four. That has blocked more than 450,000 people in Georgia and 15,000 people in Wyoming from accessing health insurance. Montana expanded Medicaid when Steve Bullock, a Democrat, was governor. Gov. Gianforte, whose net worth was estimated to be around $200 million last year, called the state’s decision to expand Medicaid a “disaster.”

As part of the American Rescue Plan, Congress further increased the incentives for states to expand Medicaid. The result is that states would make money during the first two years of Medicaid expansion. South Carolina would net $600 million by doing so. Instead, it’s rejecting that money plus the $600 million in unemployment insurance.

In McMaster’s view, the insurance money poses “a clear and present danger to the health of our State’s businesses and to our economy.” On his terms, he’s not entirely wrong. When you build an economy that runs on desperation, any reprieve, however temporary, is a threat.