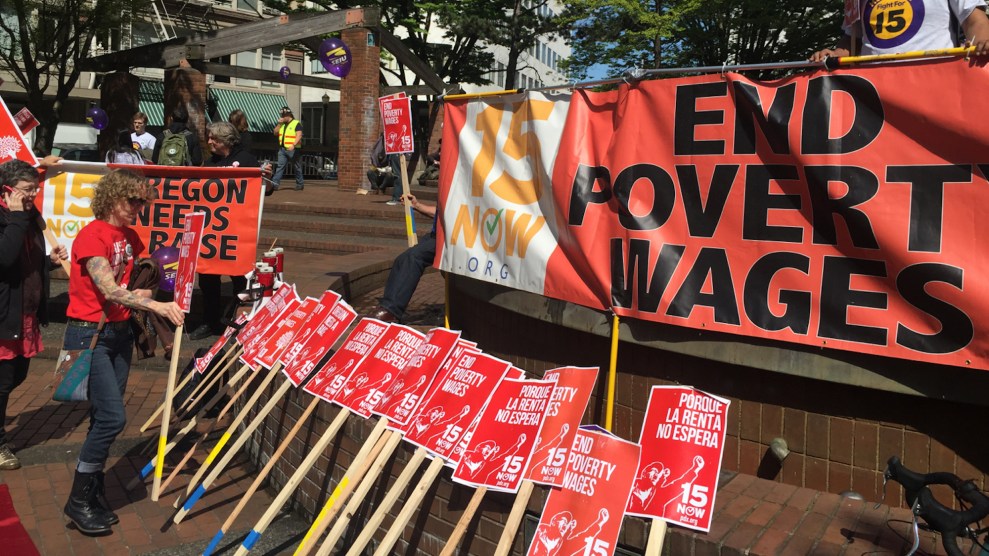 Signs at a 2015 march in support of increasing the minimum wage to $15 an hour in Portland, Oregon.Andrew Theen/AP

Reports of a labor shortage have been everywhere. There have been viral tweets of signs at fast food restaurants warning that “no one wants to work anymore,” a McDonald’s franchise offering $50 to anyone who shows up for an interview, and announcements by companies like Chipotle that they’re raising wages to attract workers.

The concerns about a labor shortage intensified after the Bureau of Labor Statistics reported that economy added 266,000 jobs in April, far short of the roughly one million jobs economists had been expecting. The full picture is complicated. Hiring, for example, actually picked up in April, but so did the number of people getting laid off or quitting.

Conservatives, however, have settled on a simple explanation for hiring troubles: They argue that the enhanced unemployment insurance that Democrats included in the American Rescue Plan is causing people to stay out of the job market. In response, at least 19 Republican-led states have announced they’re cutting off the extra $300 in weekly unemployment insurance that is set to expire in September to force people back into jobs.

To understand what’s actually going on in the economy and discuss why a restaurant labor shortage could be welcome news for workers, I spoke with Heidi Shierholz, the director of policy and a senior economist at the progressive Economic Policy Institute. Before rejoining EPI in 2017, Shierholz served as the chief economist at the Department of Labor.

What is a labor shortage?

There’s not an official measure of labor shortages. In broad brushstrokes, the way I would define it is that it’s when employers can’t find the workers they need at the wages they want to pay.

That points to how you identify a labor shortage. You see acceleration of wage growth. What happens is: I’m an employer, I can’t attract workers at the wages that I post so I raise wages to poach workers from other employers. Then they raise wages to retain their workers. And on and on.

What did the last jobs report suggest about whether there’s a labor shortage right now?

But I in no way want to make it seem like I think that restaurant wages are too high. They’re still extremely low, even with the recent acceleration. Leisure and hospitality is still by far the lowest-wage major sector.

You’ve pointed out that the average worker in the sector makes about $20,500 a year.

Is it a bad thing that employers are struggling to hire workers at the very low wages they’ve traditionally offered?

I want to be careful to not say that higher wages in this sector would be a problem. But do we see any kind of difficulties in transitioning to the higher wages? One of the things about the April jobs report is that leisure and hospitality was the sector that saw the strongest growth. It added 331,000 jobs in April, which is more than the overall number of jobs added. On net, the other sectors lost ground. Leisure and hospitality saw job growth that was pretty much what was expected. It was all the other sectors that did a lot worse.

What that says to me is that the wage growth we’re seeing in leisure and hospitality doesn’t really appear to be holding back job growth in that sector. At least that wasn’t the case in the April data. Instead, what you’re seeing is the market functioning in a way that you would expect. Employers were able to raise their wages and attract the workers that they needed.

Wages had to accelerate at some point to get back on their pre-COVID trajectory. You wouldn’t expect this recession to just permanently depress wages in that sector. We would have expected some kind of acceleration—it did happen quickly—but it doesn’t appear to have had a big harmful effect on job growth.

What are the main factors that caused the labor shortage in leisure and hospitality?

We’re hearing a ton of speculation that it’s about unemployment. And for very low-wage workers, like in the restaurant industry, unemployment insurance, at least until September, can actually provide more than what they would get at a job. But if you go to the data, you don’t find evidence that unemployment insurance is a huge driver of keeping people out of the labor force.

Why? If you look at job growth by low-wage, middle-wage, high-wage sectors in April and recent months, you find that low-wage sectors have seen by far the most job growth. If UI were driving things, you would absolutely expect to see low-wage workers less likely to be coming back to work. And in fact, it’s the opposite. That is super compelling evidence that UI is not in the driver seat.

So what’s behind the disappointing jobs numbers?

There’s evidence that points to other things that may be going on. We know that more than a quarter of schools were still closed to in-person learning in April. One of the things we saw in the April data is that the disappointing job growth was not caused by a decrease in hiring, which is what you would expect if UI were keeping people from taking jobs. Instead, the disappointing job growth in April was caused by an increase in job separations, basically layoffs and quits.

The increase in layoffs and quits was driven entirely by women. That points to another cause, given that women still shoulder the lion’s share of care responsibilities in the home. I think health concerns are still a big issue as well. With the distribution of the vaccine, that’s going down, but there are still lots of people who have serious, legitimate health concerns about returning to work.

For some workers, do you think the extra unemployment insurance is serving as a wage floor that gives them the ability to turn down poorly paid jobs?

I do think that’s likely going on to some extent. Lots of these jobs in the face-to-face service sector are just unambiguously worse jobs than they were before COVID. They are more stressful. They are harder. You’re dealing with anti-maskers, and sanitizing, and social distancing. And they’re more dangerous.

A well-functioning labor market should respond to that by offering higher wages. But the low-wage labor market in this country is not well functioning. Employers have the ability to suppress wages.

Unemployment insurance is probably helping the labor market function better by giving people on UI an outside option. It makes it so they are not so desperate that they have to take a job no matter how bad it is, no matter how unsuitable for them it is, no matter how dangerous it is. It takes away some of the desperation that gives employers the power to suppress wages.

Republican governors have responded to reports of a shortage in mostly one sector—restaurants—by cutting off enhanced unemployment insurance for everybody in every sector. Do those decisions make economic sense?

No, they make zero economic sense. I just sputter because it’s so bad. You will have people who were on unemployment insurance benefits who can’t find jobs because we still have unemployed workers vastly outnumbering job openings. You’ll have unemployed workers who can’t work right now because of COVID-related care responsibilities and COVID-related health issues. It will just increase poverty and increase human suffering. On the cruelty factor, it’s high.

It also has terrible macroeconomic effects because it will hurt not just those workers, but whole states. We know things are improving, but those states are still not back to where they were before the recession hit.

That money coming from the federal government was sustaining the spending of workers who either can’t find work or can’t work right now. The idea that they’re just turning down those federal funds is a mind-bogglingly bad choice. You’re turning away an injection of money into the economy that would help it recover more quickly. The decisions are arrived at through something other than economic logic.

So it’s hurting individual workers and state economies overall. Does anyone benefit from cutting off the extra UI?

You could argue that the low-wage employers will benefit because they’ll be able to not have to raise wages as much. But they will also be hurt by the dampening on the broader economy. They need people to have money to spend to see their profits rise. This is one of those things that really does feel like a lose-lose-lose.