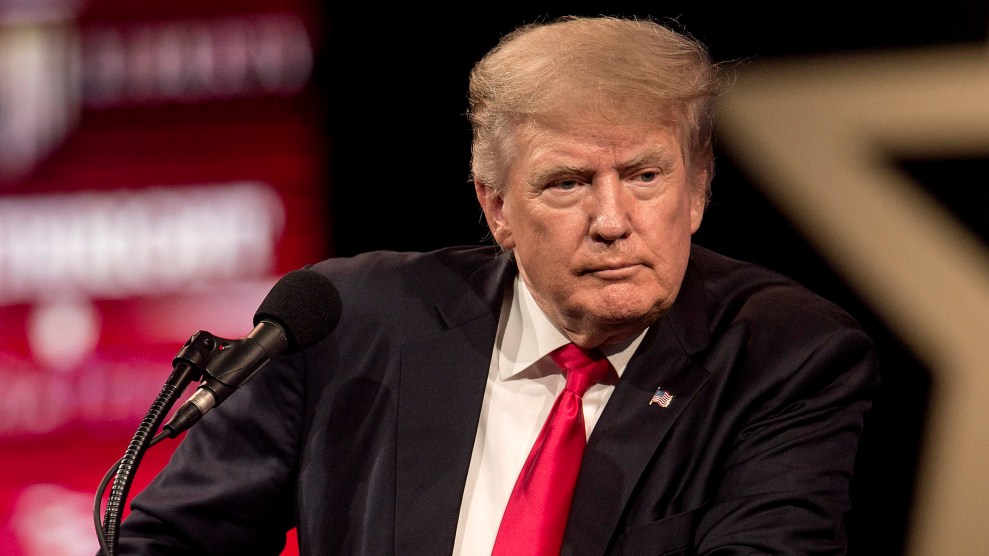 There is a transmission chain of disinformation on the right that is profitable both financially and politically. This week, Donald Trump supplied a text-book example.

The former president sent out email soliciting donations for his political action committees. The note began with an explosive headline: “BREAKING: New Evidence Indicates Enough Illegal Votes in Georgia To Tip 2020 Results.” In the Trump-signed letter, he claimed that a “just-released” report had concluded there were various instances of voting irregularities in the Peach State. This email was not just a plea for money—”I’m reviewing a list of patriots who contribute to this email and I expect to see your name”—it was a missive propagating his Big Lie that the election had been stolen from him. And he suggested a full forensic audit will reveal more vote-counting shenanigans.

Recipients of the solicitation might be persuaded—or have their preexisting errant assumptions reinforced—by the email’s declaration of “new evidence.” Yet under the most cursory examination, this claim of real evidence crumbles.

The cited source was the Federalist, the archly conservative outlet. Yet if a recipient clicked on the hyperlinked headline in Trump’s email, he or she would not be transported to the story. Instead the destination is a donation page for Trump. (The fine print said nothing about whether the contribution would be used for Trump’s crusade to overturn election results.)

But the headline for this email was indeed appropriated word-for-word from the Federalist article that asserted, “New evidence indicates that more than 10,300 illegal votes were cast in Georgia in the November 2020 general election.” Trump, however, lost the state by 11,779. So even if every single one of these votes had been cast for Biden, that would not change the end result. But the Federalist insisted that the number of “illegal” votes “will continue to rise over the next several months, potentially exceeding the 11,779 votes that separated Joe Biden and Donald Trump.” Maybe. But the basis for the Federalist‘s claim of illegal votes—which is the basis for Trump’s send-me-money appeal—was rather flimsy.

Though the article acknowledged that an audit and a statewide recount did confirm Joseph Biden’s victory in the state, the Federalist reported that there was “evidence that nearly 35,000 Georgians had potentially voted illegally” and this has been ignored. (In his recent speech to the Conservative Political Action Conference, Trump similarly claimed that “they found 35,000 votes” in Georgia.) The 35,000-vote claim—which underlies the 10,300-vote claim—comes from Mark Davis, the president of Data Productions Inc. The Federalist called him “an expert in voter data analytics and residency issues” and noted that he used the National Change of Address (NCOA) dataset maintained by the US Postal Service to identify nearly “35,000 Georgia voters who indicated they had moved from one Georgia county to another, but then voted in the 2020 general election in the county from which they had moved.” Of these 35,000, Davis says, more than 10,300 have updated their voter registration information since the election, confirming their change of address. A-ha, the Federalist proclaimed, illegal votes!

Georgia rules do state that if you move out of a county more than 30 days prior to an election, you cannot vote in that county. But Factcheck.org dug into this and discovered the matter is far more complicated than the Federalist and Davis assert. Walter Jones, a spokesman for the secretary of state’s office told the fact-checking outfit, “Bottom line is that determining whether someone who moved from one county to another should have been eligible to vote in the November election requires applying a complicated array of both federal and state law (some of which are contradictory) to each individual’s specific factual scenario,” He noted that the simplistic spreadsheet Davis concocted “doesn’t come close to meeting that standard.”

Robert Stein, a political science professor at Rice University and an expert on voting and elections, informed Factcheck.org that Georgia law is not clear as to what constitutes a residence. He explained: “One could imagine voters who have several residences in the state e.g., vacation homes, but only register to vote in one of these locations. Therefore a change of mailing address is not evidence of a change in residence, only the desire to receive one’s mail at a different location… Merely changing where one chooses to receive their mail, and continuing to vote where they continue to reside should not be interpreted as evidence of circumventing GA’s voter registration requirement.”

Oh. So maybe these were not illegal votes. As Factcheck.org points out, Georgia courts have ruled that a change of address filed with the USPS system is not sufficient for challenging a voter’s eligibility. Stein noted that the “extent and size of this voting behavior is hard to measure but I suspect it’s not consequential.” And as Factcheck.org concludes, “Indeed, even if voters were determined to have voted improperly, there is no way to know who they voted for or what impact it could have had on the outcome.” Maybe a majority of the supposedly “illegal” votes were for Trump.

Pronouncing these votes as “illegal” is underhanded and scammy. Yet that is how the Federalist characterized them, providing clickable red meat to an audience that embraces Trump’s bogus claims about the election. And Trump’s team seized on this story to buttress its unfounded lie that Trump really, really, really won the election. There’s no telling how much money Trump will rake in using the Federalist story. In the weeks after the election, Trump and the GOP bagged about $100 million, pushing his fraudulent election assertions. With this email, Trump is spreading and cashing in on disinformation. And, no doubt, the Federalist gang appreciates the amplification. They all are profiting from this propaganda merry-go-round, and it’s a ride that seems to have no end.