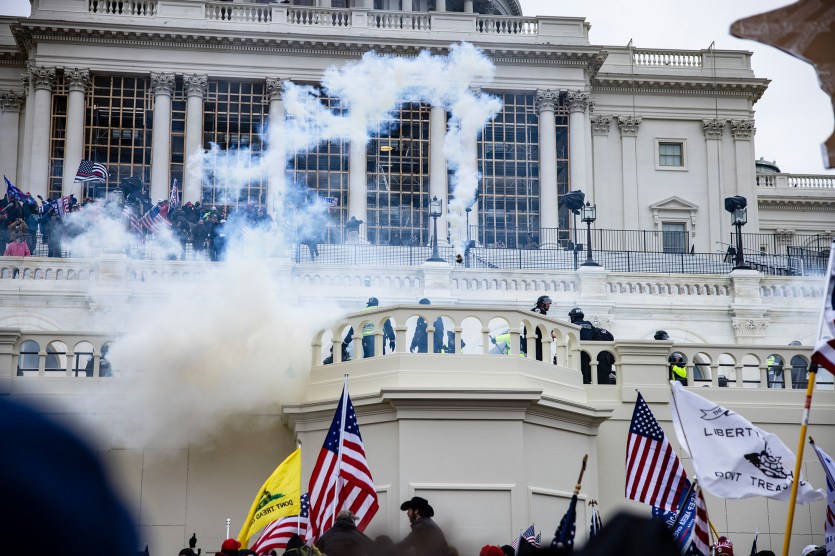 Trump supporters storm the US Capitol on January 6.Samuel Corum/Getty

Speaking on CNN’s State of the Union on Sunday, Republican Sen. Pat Toomey of Pennsylvania offered a now-familiar complaint about efforts to investigate the January 6 attack on the US Capitol incited by the then-president of the United States.

“It’s very clear that Democrats have an incentive to try to drive a political message here, and a purely partisan commission in the House probably is gonna do that,” he said.

GOP Sen. Pat Toomey says investigating Jan. 6 "is politically to the advantage of Democrats, to try to keep this issue in the forefront" and argues "it is a constant reminder about a terrible episode in our history … rather than looking at the policies of the current President" pic.twitter.com/jlT8qk6V4t

Toomey, who voted to remove Trump from office after the second impeachment trial and supported a bill for a bipartisan January 6 commission, has been more clearheaded than most in his party about Trump’s effort to overturn the 2020 election. But his comments here about the select committee being formed in the House of Representatives (after the bipartisan commission he supported in the Senate was filibustered), reflect wishful political thinking more than reality.

Even as House Minority Leader Kevin McCarthy, Rep. Jim Jordan and others have worked overtime to turn the select committee into a partisan circus, they haven’t necessarily succeeded. Rep. Liz Cheney of Wyoming—until very recently a member of House Republican leadership and, literally, a Cheney—is on the committee. And while Toomey was expressing his misgivings on Sunday, House Speaker Nancy Pelosi was on ABC announcing that she was going to ask Republican Rep. Adam Kinzinger of Illinois to sign on. (Kinzinger accepted not long after, stating that the “lies and conspiracy theories” encouraged by many in his own party threatened America’s “self-governance.”) Ex-Rep. Denver Riggleman of Virginia is reportedly also in the mix to join the committee. Republicans clearly are welcome to participate in the fact-finding, even though, for understandable reasons, those who helped foment an attempted coup and have tried to whitewash it ever since, are not.

While Toomey frames the House select committee as a 2022 electoral strategy for the Democrats, many of his Republican colleagues are still acting as if it’s January 5—wielding Trump’s election lie as a political hammer and using it as a rallying cry ahead of, yes, the next election. These elected officials are not just attempting to escape accountability for a failed coup and to block politically damaging information from going public. They are arguing that America should let bygones be bygones as the Republican Party is continuing to weaponize the same election lie that led to the Capitol attack for partisan advantage in anti-democratic ways.

Currently, Texas Democrats are hiding out in DC trying to stave off voting-rights restrictions in their state motivated by Trump’s election claims, part of a nationwide GOP push to suppress voting rights. On Sunday, Trump—still apparently the de facto leader of the GOP—was in Arizona, where he repeated his lies about the election being “stolen,” and where Republicans in the state government have used those false claims to conduct a bizarre show trial for the 2020 ballots.

It’s not surprising that Republicans like McCarthy and Jordan would want to move on without having to suffer any consequences for their party’s role in the Jan. 6 insurrection. But it’s not at all clear why the US Congress and its current House Speaker, who faced murder threats from a bloodthirsty pro-Trump mob six months ago, should let them.