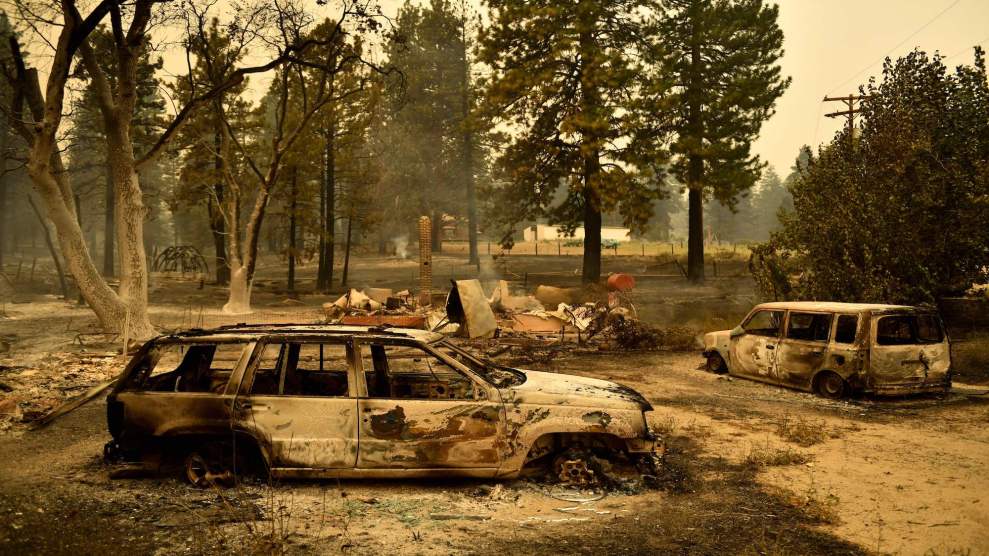 When Steve Kress moved into an old ambulance he’d converted into a travel van some weeks ago, he’d started wearing a pin that reads “Since I gave up hope, I feel much better.”

“It’s true though,” he told me. “I gave up hope about my property surviving. It’s already gone as far as I’m concerned.”

Kress has been nervously waiting out the Monument Fire, a blaze in far Northern California that has grown to more than 216,000 acres and is threatening multiple communities. His 10-acre plot was in an evacuation area; his Airstream trailer, workshop, goats and chickens, the house he’s building—all were a harrowing 300 yards from the fire’s perimeter.

With torrential rains forecast for the region this weekend, Kress may have dodged a bullet. But he lives in a community whose insurance premiums have skyrocketed in recent years because of wildfire risk. When his sister, an insurance agent, evaluated his house and property and told him he wouldn’t be able to find affordable fire coverage, Kress went without, a decision known as “going bare.” If his property burns, it burns. He’ll just have to leave. His ability to get coverage, he said, could be the difference between him staying and going: “If I lost it all and I had the money to redo the whole thing, I would probably rebuild right away.”

“If I lost it all and I had the money to redo the whole thing, I would probably rebuild.”

Kress isn’t an outlier. “Two-thirds of people who lose their homes to wildfires are severely underinsured,” says Amy Bach, executive director of United Policyholders, a consumer advocacy organization. This  means they lack the money to rebuild properly or cover other fire-related expenses. Already this year, wildfires have burned or damaged more than 3,200 structures in California alone, including countless homes and businesses.

Premiums have soared in these high-risk zones. Cancellations are on the rise. And some insurers have pulled out entirely, leaving lower-income homeowners to choose between basics like food and prescriptions and pricey coverage. If a fire torches their communities, “what are they going to do to recover?” asks Douglas Quinn, executive director of the American Policyholder Association, an insurance industry watchdog group. “They’re going to spend their savings, they’re gonna spend their kids’ college fund, they’re gonna spend their retirement money. If those assets are unavailable, they’re going to go deeper into debt, and many people will lose their homes.”

A non-renewal can result from an insurer refusing to renew a policy or the homeowner letting coverage lapse—often because rates have gotten too high. Many families have seen insurance bill more than triple in recent years; some report premiums that once cost $1,000 getting jacked up to as much as $7,000.

Families can turn to unregulated “surplus” insurers, but that can result in coverage that’s even more expensive and less reliable. Another option is the California FAIR Plan, a state insurance program that officials describe as a “last resort.” It doesn’t provide as much coverage as the typical private plan and it’s still too expensive for some families. Last fall, the California Department of Insurance (CDI) approved a premium hike of almost 16 percent.

“It’s causing a dramatic impact in virtually all our poorest counties.”

Lenders typically require fire insurance, but families without mortgages have the option of going bare. Accurate numbers on this are “hard to get,” Bach told me, but some families are going bare in places like Janesville, an unincorporated town of about 580 households vulnerable to the still-spreading Dixie Fire. In 2019, according to CDI data, roughly one-quarter of households in Janesville had non-renewals. Greenville, a town of 1,072 households that was leveled by the Dixie Fire, had 84 non-renewals that year.

The Dixie Fire, while 86 percent contained, has burned close to 1 million acres and destroyed 1,329 structures to date, with more still under threat. Dixie has burned through five counties, all of which have seen steep increases in insurance rates and cancellations. In 2019, there were 12,339 non-renewals in Butte County, 1,462 in Lassen, and 8,871 in Shasta.

California’s forested rural counties were the first to feel the impacts of this looming insurance crisis. Many of these tight-knit communities are mired in intergenerational poverty. “These people that have been paying $1,000 a year for their home insurance are senior citizens living in rural areas and they’re on a fixed income. If the premium goes up to $5,000, they literally can’t pay,” Bach told me.

“It’s causing a dramatic impact in virtually all our poorest counties,” notes Paul Smith, former VP of governmental affairs for the Rural County Representatives of California, an advocacy group of county officials. But insurance problems have since spread even to some affluent urban areas.

Staggering fire losses have left insurance companies skittish. For just two months of 2017, claims from California wildfires topped $12 billion. Amid rising temperatures and worsening drought, residents have lost homes and businesses to fire in record numbers—more than 35,000 structures all told from 2018 through 2020.

By 2018, the CDI was already sounding the alarm about surging premiums and plunging coverage in high-risk areas. Insurers, agency officials found, were not taking fire mitigation efforts into account in their calculations and were overly general in risk assessments, ranking whole regions as high-risk without accounting for families’ individual circumstances. CDI officials recommended legislation to further regulate and stabilize the fire-insurance market, a move that catalyzed ongoing tensions between companies and state regulators.

To curb a rash of cancellations, insurance commissioner Ricardo Lara has issued a series of one-year moratoriums forbidding the revocation of coverage near recently burned areas, and has taken steps to expand FAIR Plan coverage. Last October, he convened a first-ever state investigatory hearing on wildfire insurance, at which officials reported a 31 percent increase in non-renewals from 2018 to 2019, mostly in wildfire zones. “In a blink, my insurance went from $1,500 per year to over $4,800, more than triple,” testified Colleen Cross, a retired Nevada County public school educator, describing her experiences in the aftermath of 2018’s devastating Camp Fire.

The problem extends well beyond California. Rates are already creeping up in other fire-prone states, including Colorado, Oregon, and Washington. Nationwide, wildfires burned more than 89,000 homes and businesses between 2005 and 2020. Co-existence with fire is an increasingly blunt reality, but adaptation—in the way we mitigate risk, prepare our communities, and help them recover—has lagged behind. “Climate change and the for-profit property insurance system are incompatible,” Bach says. “A lot of insurance companies are now saying, ‘You know, we just can’t handle this, and the government needs to pick it up.’”

It’s not uncommon for big companies to capitalize on their profits and socialize their losses. Major US property and casualty insurers remain profitable overall. In 2020, State Farm, Nationwide, and Farmers generated $79 billion, $42 billion, and $12 billion, respectively, for their shareholders.

“A lot of the people we’re helping, on one level, are victims of climate change.”

Western states are in the midst of another epic season, with dozens of blazes tearing through wilderness in Idaho, Oregon, and Washington. In addition to the Dixie and Monument fires, California is still grappling with the Caldor Fire, which only recently was threatening to destroy the community of South Lake Tahoe, a key tourist destination and crown jewel of California beauty—now 71 percent contained, the fire has torched almost 220,000 acres. Yet another fire outbreak is threatening the area around Sequoia and King’s Canyon national parks, home to some of the largest and oldest trees on the planet. Families around the state are stuck in evacuation limbo as they wait to see if their homes and towns survive.

So what happens, I asked Bach, to those who can’t afford adequate insurance and don’t have a cushion of wealth to fall back on? Are they our next wave of climate migrants? “Absolutely,” she said. “A lot of the people we’re helping, on one level, are victims of climate change.”

That’s what’s at stake: thousands of Americans, perhaps millions, at risk of losing homes, businesses, and livelihoods to fires, floods, droughts, and hurricanes each year. At risk of traumatic losses followed by years of scratching disrupted lives back together and doing battle with insurance adjusters.