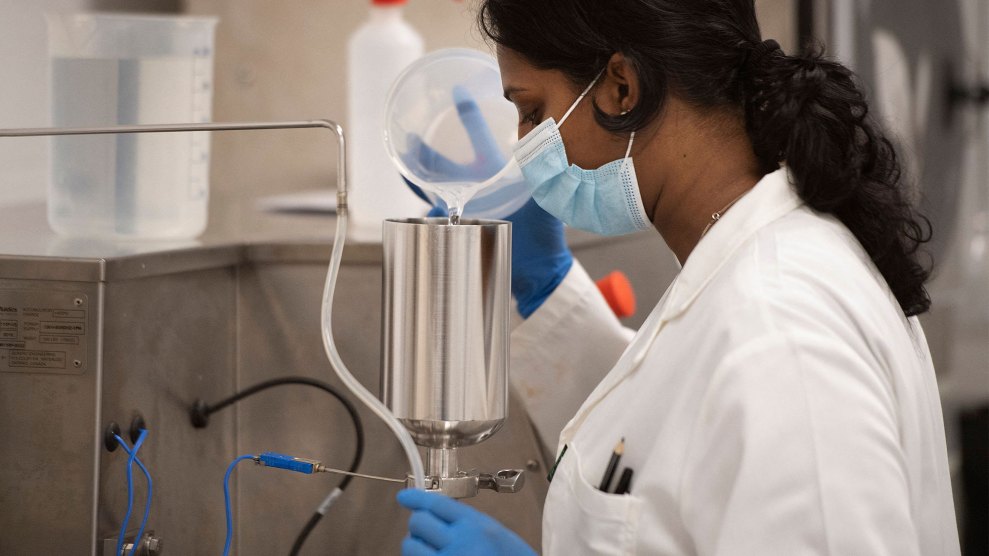 An employee at Afrigen works in a laboratory in Cape Town.RODGER BOSCH/AFP via Getty Images

Scientists in Cape Town, South Africa, are “assembling and calibrating the equipment needed to reverse engineer a coronavirus vaccine that has yet to reach South Africa and most of the world’s poorest people,” the Associated Press reported Sunday.

Last weekend, the New York Times reported that Moderna was profiting by sending most of its vaccines to wealthy countries and that “some poorer countries are paying more and waiting longer for the company’s vaccine than the wealthy—if they have access at all”— something my colleague Edwin Rios called “shameful and dangerous.”

Earlier this year, Moderna said it would expand its vaccine distribution to poor countries. But as we get closer to the end of 2021, most poor countries still don’t have access to Moderna’s shot, all while the a Massachusetts-based company is expected to make around $20 billion in revenue this year.

The move to reverse engineer the Moderna vaccine has backing from the World Health Organization, which coordinates vaccine research, training and production in South Africa, the AP reported. It is a last-resort effort to get vaccines to poor countries in Africa.

“We are doing this for Africa at this moment, and that drives us,” said Emile Hendricks, a 22-year-old biotechnologist for Afrigen Biologics and Vaccines, the company trying to reproduce the Moderna shot. “We can no longer rely on these big superpowers to come in and save us.”

Some experts see reverse engineering—recreating vaccines from fragments of publicly available information—as one of the few remaining ways to redress the power imbalances of the pandemic. Only 0.7% of vaccines have gone to low-income countries so far, while nearly half have gone to wealthy countries, according to an analysis by the People’s Vaccine Alliance.

Details around potential conflict with intellectual property are still “murky” in part because the WHO has never directly taken part in reverse engineering a novel vaccine. But WHO officials said the urgency of the pandemic calls for it.

The team in South Africa is hoping to have a version of the Moderna vaccine tested within a year, and in production for commercial distribution soon after.