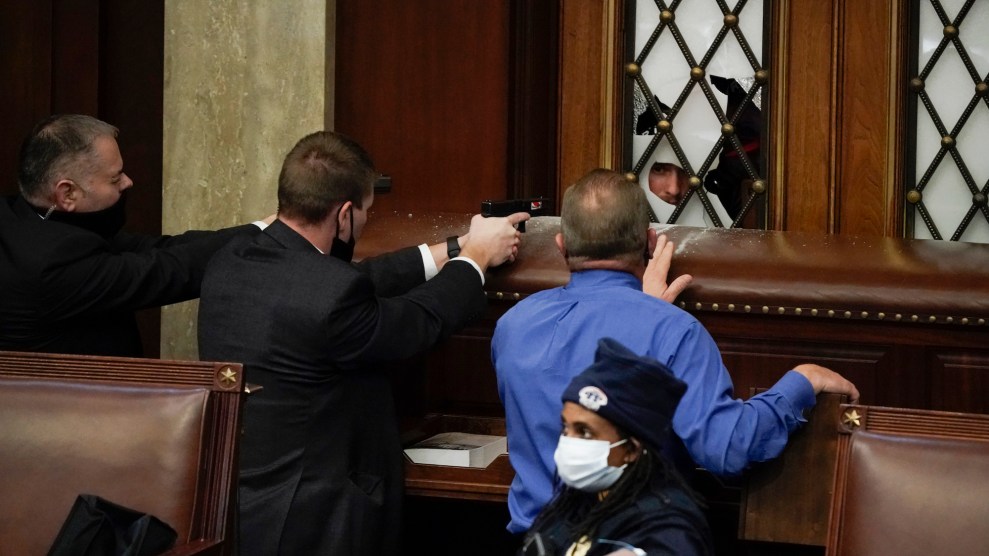 In this Jan. 6 file photo, U.S. Capitol Police watch as rioters try to break into the House Chamber.J. Scott Applewhite/AP

A sprawling new investigation by the Washington Post into the events leading up to the Capitol insurrection has revealed that the Federal Bureau of Investigations received numerous and highly-detailed tips on the potential for serious violence by followers of then-president Donald Trump on January 6. And, despite the specificity and volume of reports, the FBI largely dismissed the warnings.

The fact that law enforcement of all stripes reportedly underestimated the likelihood of violence on Jan. 6 has already been widely reported. But the Post’s massive project—started last spring and based on interviews of more than 230 people—describes in excruciating detail just how much was ignored.

In one of the more shocking revelations, the Post recounts how information began flooding into the FBI as early as Dec. 6, when the agency received a tip about a message in an online post telling Trump supporters: “Please be in DC, armed, on the 6th. You might have to kill the palace guards. Are you okay with [that]?”

Another message reported by the Post stated, in an apparent reference to killing officers: “Drop a handful, the rest will flee.”

On Dec. 19, Trump tweeted a message exhorting his followers to come to Washington, D.C. on Jan. 6, writing, “Big protest in D.C. on January 6th. Be there, will be wild!” That lit up online pro-Trump groups, and FBI informants quickly began passing on information about highly-specific planning for a violent attack in Washington.

… The FBI received a call alerting them to Trump supporters making plans online to bring arms to Washington and arrest lawmakers. The Sunday afternoon call was handled by the bureau’s National Threat Operations Center, a clearinghouse for tips about crimes, according to a document titled “Threats to Take Guns and Overrun the DC Police January 4th-January 20th.” The file was updated the following afternoon by an FBI employee seeking to reclassify the information: “More DT [domestic terrorism] than Criminal in nature… Criminal has received a significant number of Guardians as a results of threats to Congress and other government officials.”

The caller, according to the FBI document, said people were “planning on meeting in certain areas and sneaking guns into DC in an attempt to overrun the DC police, beginning January 4th-20th.” On three different sites, “there is discussion about recruitment, where to meet at, bringing guns, and arresting Senators and members of Congress to hold trials outside in public areas.”

In one specific threat, Utah Republican Sen. Mitt Romney, often regarded by Trump supporters as a traitor to the MAGA cause, was specifically named as a potential target.

Yet, despite all of this, on Dec. 22, the Post says that the FBI closed its internal threat assessment of the matter, determining that it “did not warrant further investigation at this time.”

A FBI official told the Post that before doing so, various steps were taken to share the information, but ultimately, the determination was made that the tips they had received featured “vague and primarily First Amendment protected speech.”