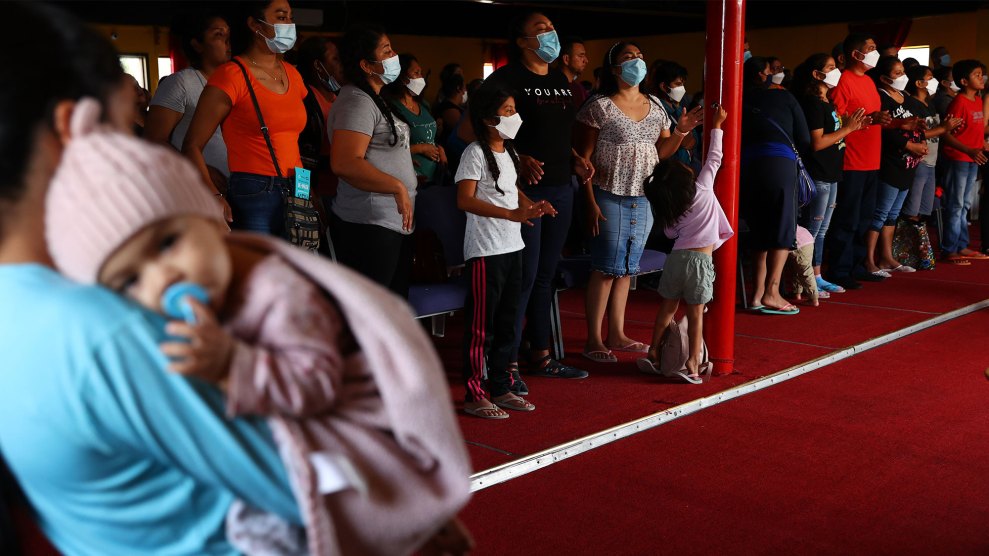 Asylum-seeking migrants at a worship service in a Tijuana migrant shelter. Over 300 migrants are waiting there for the opportunity to apply for asylum in the US.Mario Tama/Getty Images

The Biden administration has reached a deal with the Mexican government, allowing it to restart a Trump-era policy that forces asylum seekers to wait in Mexican border cities after asking for refuge in the United States. The “Remain in Mexico” policy is set to resume next week with some changes, despite months of public pressure from human rights and immigrant rights groups not to reopen the harsh and controversial program.

“The ‘Remain in Mexico’ policy was a humanitarian disaster when it was first implemented, and it is doomed to be so again,” Human Rights First senior director for refugee protection Eleanor Acer said in a statement Thursday. “A laundry list of improvements cannot fix an inherently inhumane, illegal, unjust, and unfixable policy. Every day that the Biden administration continues to use Trump 2.0 policies that evade U.S. refugee law, both ‘Remain in Mexico’ and Title 42, U.S. officers will be delivering people seeking protection back to places where they are targets of kidnappings, torture, and brutal attacks.”

The administration is acting to “comply with [a] court order,” DHS said in a press release Thursday.

I’ve reported on this policy for almost three years and have seen first hand how devastating it is for vulnerable families and asylum seekers at the border and in US immigration courts. As I wrote last month:

The Migrant Protection Protocols, also known as “Remain in Mexico,” is one of the most impactful and cruel policies of the Trump era. Since it was first implemented back in January 2019, it forced more than 70,000 non-Mexican asylum seekers to wait in Mexico for long periods, leaving them vulnerable to physical violence, sexual assault, and extortion, while their claims were processed north of the border. As I wrote in June, MPP will go down as a monumental in shifting how the US handles asylum; the program was designed to wear people down by dragging out the asylum-seeking process to the point that many give up. Biden himself called it “bad policy” when he suspended it his first week in office, saying that “securing our borders does not require us to ignore the humanity of those who seek to cross them.” Back during the 2020 campaign, now first lady Jill Biden filmed an emotional video from one of the migrant camps formed because of MPP, saying “we can’t treat people like this.” The Department of Homeland Security officially ended the policy but Texas and Missouri sued the Biden administration for terminating the policy and a Trump-appointed judge sided with the states.

DHS, in coordination with the Departments of State and Justice, will begin the reimplementation of the program “on or around Monday Dec. 6,” according to the DHS statement. Meanwhile, DHS Secretary Alejandro Mayorkas has said the program will be shut down the moment the court order is lifted.

As I reported last month, after the court ruling, the Biden administration had been trying to address the judge’s concerns with how the program was terminated at the start of his tenure; over the past year, Mayorkas has argued in several memos for the program’s termination. In the meantime, though, DHS couldn’t unilaterally restart MPP without Mexico’s approval:

There are forces at play that could end the program once and for all that are outside of Biden’s control.  Mexico’s president, Andrés Manuel López Obrador, could just say he won’t allow MPP to resume. The policy relies on Mexico’s cooperation, as it would have to agree to take back asylum seekers who are not Mexican citizens. Initially, Mexico had called MPP a unilateral move imposed by the Trump administration. Still, it went along taking in non-Mexican asylum seekers after Trump threatened to hit Mexico with tariffs and with border closures. (Mexico did place some exceptions on who it wouldn’t take in, including unaccompanied children and people with disabilities, but as BuzzFeed News has reported, US border officials often ignored these guidelines.) Reuters reported that the Mexican government has expressed concerns “around due process, legal certainty, access to legal aid and the safety of migrants.”

As of Thursday morning, the Mexican government had decided it would accept “individuals returned pursuant to MPP,” subject to “certain humanitarian improvements,” DHS said. The biggest changes listed in a DHS policy guide include:

DHS said MPP will roll out slowly, but once it is back to being “fully operational,” it will be active at seven ports of entry along the US-Mexico border: San Diego, Calexico, Nogales, El Paso, Eagle Pass, Laredo, and Brownsville.

Meanwhile, public health rule Title 42 is still being used to turn away almost everyone who comes to the border—notably, without the chance to exercise their legal right to petition for asylum. After the Trump administration instituted Title 42 in March 2020, there was a monumental drop in MPP cases, so at this moment it’s still unclear who will be sent back across the border under Title 42 and who would be placed in MPP.

For a fuller understanding of just how devastating this program was last time around, read about one family I spoke with over 130 grueling weeks as they navigated MPP-induced border hell.