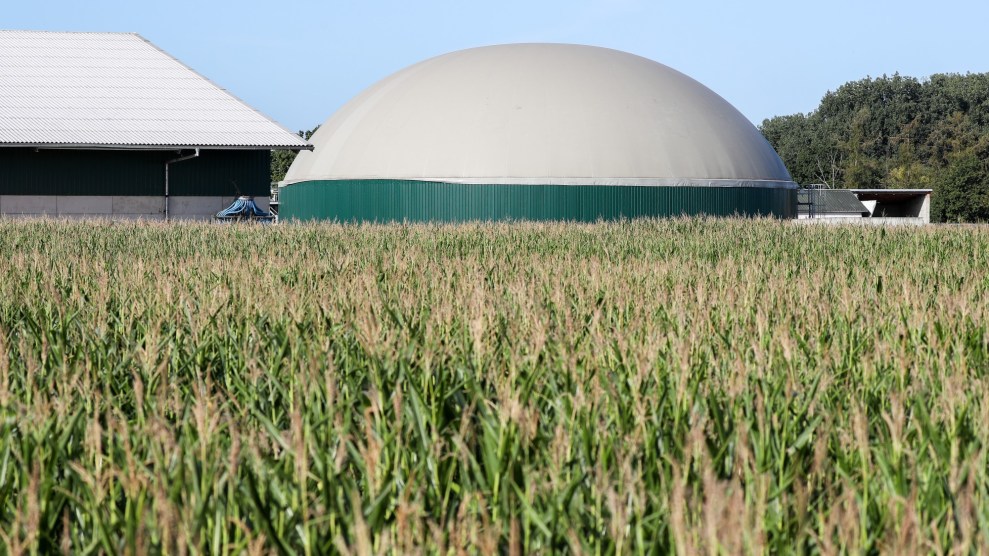 This story was originally published in Wired and is reproduced here as part of the Climate Desk collaboration.

The borders of the Corn Belt have always been fuzzy. The sprawling patchwork of cornfields that spreads across the Midwestern United States is one of the most productive agricultural regions on Earth. Over 36 percent of the world’s corn comes from the US, and almost all of that is grown in the handful of states nestled between the Great Plains to the west and the Appalachian Mountains to the east.

But the Corn Belt is on the move. Over the past couple of decades, farmland devoted to corn production has been creeping northwards and westwards. In North and South Dakota, grasslands that were formerly used for cattle grazing or set aside for conservation have been converted to cornfields. Between 2005 and 2021, the area of land harvested for corn in the US increased by around 14 percent.

One of the big drivers of this shift has been bioethanol—transportation fuel usually made from fermented corn. Since 2005 the US government’s Renewable Fuel Standard (RFS) has mandated that gasoline producers blend corn ethanol into their fuel. The amount the RFS requires to be mixed in has ratcheted up each year from the policy’s start, and since 2016 gasoline producers have been instructed to blend 15 billion gallons of corn ethanol annually into transportation fuel. The RFS was supposed to reduce reliance on fuel imports and lessen the environmental impact of the transportation sector, but when it was introduced some scientists warned that it might end up increasing overall emissions. Now it looks like those predictions have come to pass.

In February 2022, Tyler Lark, a scientist at the University of Wisconsin-Madison, published a study analyzing the impact of the RFS. Lark and his colleagues researched the impact that the policy had on crop prices and farm expansion between 2008 and 2016, comparing the real-world situation to a counterfactual one where biofuel production was kept at levels mandated in an earlier version of the RFS.

Lark’s study found that the RFS significantly pushed up the price of corn. This incentivized the expansion of total US cropland by 2.1 million hectares between 2008 and 2016—an increase of 2.4 percent. Often the areas newly converted to cropland were grasslands on the western edge of the Corn Belt. “Over millennia these grasslands have created really carbon-rich soils. And what happens is when you plow that up you expose a lot of it and make it vulnerable to being released into the atmosphere,” says Lark.

The supposed benefit of biofuel is that, although it still releases carbon dioxide when it burns, that carbon was drawn down from the atmosphere by the plants that make up the fuel rather than being released from oil that was once underground. But growing fuel creates emissions too. The biggest problem is when land that used to be a carbon sink is plowed up to plant crops, but manufacturing fertilizer is also a major source of emissions, and applying that fertilizer to land also releases greenhouse gasses in the form of nitrous oxide emissions.
In 2010 the Environmental Protection Agency (EPA), which sets the amount of corn ethanol required by the RFS, estimated that by 2022 corn ethanol would have total life-cycle emissions 20 percent lower than gasoline. But these projections didn’t account for the dramatic effect the RFS would have on land use in the US. “I don’t think people expected as much land to come back into production,” says Lark. His study found that the RFS increased corn prices by 30 percent and the price of other crops by 20 percent. In response, farmers who previously used their land for cattle grazing or who were involved in conservation schemes started growing crops instead. All this land-use change has essentially outweighed the reductions in greenhouse gas emissions that come from growing fuel instead of pumping it out of oil wells.
Lark’s study comes at a decisive time for the future of corn ethanol. Later this year the EPA will decide how much biofuel should be blended into US transportation fuel from 2023 onwards. And on April 12 the White House temporarily waived the summertime ban on E15—fuel made from gasoline blended with between 10.5 and 15 percent ethanol. In the US, E15 is banned over the summer months because of the way it reacts with sunlight to create smog, but lobbyists and some lawmakers have argued that removing the ban will ease the country’s reliance on Russian oil and keep down gasoline prices. Earlier this month, Congress voted to ban imports of oil, gas, and coal from Russia.
Increasing corn ethanol production would be a big mistake, says Jason Hill, a biofuels expert at the University of Minnesota. “The science has long pointed out that this is not where we want to go,” he says. “In the long run corn, ethanol has done almost nothing for our energy independence, and it has a large, disproportionately negative impact on the environment and food security.”

The projected impact of corn ethanol differs depending on how you estimate those emissions. In early April a group of US senators representing Corn Belt states wrote a letter to the EPA urging it to adopt a model that shows biofuels have a considerably better environmental impact than Lark’s study suggests. But in March, Hill published an op-ed in the scientific journal PNAS calling for greater scrutiny of the models used by regulators like the EPA to assess biofuels. Lark’s study “supports other recent concerns that these commonly used models underestimate the emissions consequences of land-use change, which in turn leads to their overestimating the climate change benefits of corn ethanol,” Hill wrote.

“In the long run corn, ethanol has done almost nothing for our energy independence, and it has a large, disproportionately negative impact on the environment and food security.”

“Models are always incomplete. They are usually lacking important data that ideally they would have, but which doesn’t exist or doesn’t exist as broadly across the world as you’d like,” says Richard Plevin, a former academic who specializes in biofuel modeling and now works as a consultant. In 2006 he was part of a team at UC Berkeley that published a study concluding that corn-based ethanol could have lower environmental impacts than gasoline.

Since then Plevin’s position has changed completely. “My conclusion at the end of all this is it’s misguided,” he says. The problem, Plevin argues, is that it’s impossible to accurately estimate the overall emissions that result from using biofuels. The effects of biofuel mandates can ripple out in unpredictable ways. If biofuel displaces gasoline in one country, then this could suppress the price of gasoline elsewhere in the world and lead to people increasing their fuel use. Add in a war, or trade embargoes, and the whole dynamic can flip again. “You can assume 10 different scenarios about the way things are going to unfold and you’ll get 10 different answers, and they might all be equivalently realistic. How do you build a policy around that?”

For Plevin this leaves us with an obvious choice: reducing our dependence on liquid fuels altogether. “If I were king for a day, I would be putting all my effort into electrification right now,” he says. Hill agrees. “It’s no longer corn ethanol versus gasoline. They have the same interest, and they’re both feeling pressure from electrification, which is their common enemy,” he says.

There are other impacts of bioethanol too. Global food prices jumped by a record 13 percent last month. Diverting some US corn away from bioethanol and toward food would help keep prices lower and replace lost exports from Ukraine and Russia. “There is all this competition for the land,” says Annie Levasseur, a professor at L’École de Technologie Supérieure, an engineering faculty based in Montreal. “If we want to look at the impact of increasing biofuel, then we will need cropland, and there will be this displacement.”

Levasseur and Hill are both part of a committee put together by the National Academies of Science, Engineering, and Medicine (NASEM) to assess current methods for analyzing the impact of low-carbon transportation fuels. The committee’s report, which will be published in the third quarter of 2022, “contains information that the EPA may wish to take into consideration if it decides to develop a new RFS or a low-carbon fuel standard,” says Camilla Yandoc Ables, a senior program officer at NASEM.

In Lavasseur’s opinion, bioethanol production is already high and shouldn’t be increased. Instead, the US government should be looking at other ways to reduce transportation emissions. “We cannot keep increasing demand for energy and then transform everything to biofuel,” she says. “We really need to decrease the demand.”