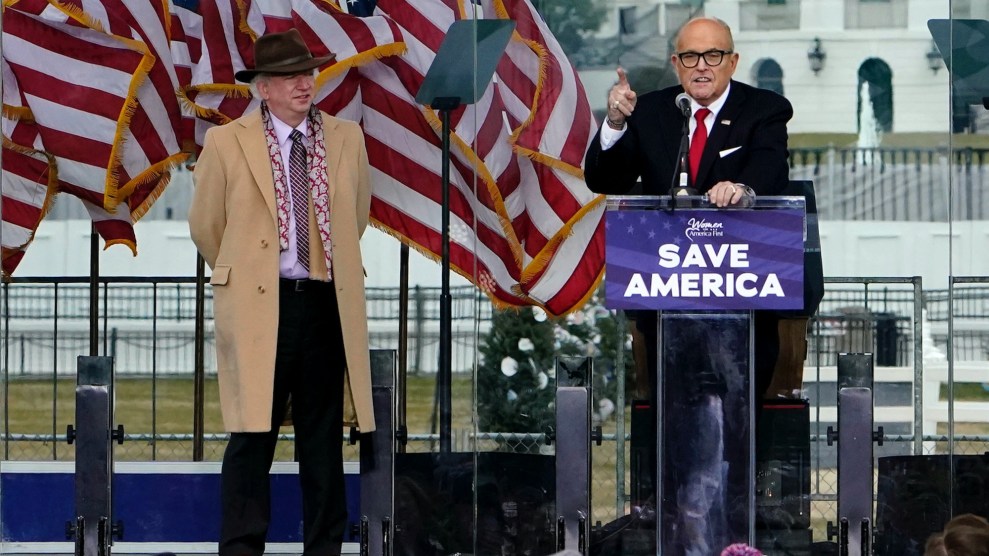 John Eastman and Rudy Giuliani at the Jan. 6, 2021 rally at the Ellipse.Jacquelyn Martin/AP

Beware the yes men. Donald Trump couldn’t have caused January 6 alone. The defeated president’s attempted putsch would not have gone as far it did, and the January 6 attack on Congress might have been avoided, if sycophantic Trump aides had not helped Trump further plans that they privately admitted were illegal and dangerous. And Trump’s coup attempt would have gone further had VP Mike Pence and his staff not finally stood up to the boss.

The select committee investigating the January 6 attack on Congress revealed Thursday that John Eastman, the conservative lawyer who helped concoct the unsupported notion that Pence could unilaterally reject electors and hand Trump another term, had begun discussing the plot before Election Day.

Eastman knew even then that the plan was unlawful: “Nowhere does it suggest the President of the Senate gets to make the determination on his own,” he wrote in comments on a draft letter to Trump that the committee revealed on Thursday. The letter, whose authorship is unclear, described how Pence could reject state electors. Eastman’s note referred to the 12th Amendment, which lays out the process for confirming electoral votes.

Even as Eastman curried favor with Trump by pushing the coup plan, he consistently admitted that it was illegal.

According to Thursday’s testimony, even as Eastman curried favor with Trump by pushing this coup plan, he consistently admitted that it was illegal. Greg Jacob, Pence’s former top lawyer, testified that Eastman had “acknowledged” in a January 4, 2021 meeting that his plan violated the Electoral Count Act. That means it was against the law.

Although Eastman asserted the law was unconstitutional, he admitted his argument wouldn’t fly. He said, according to Jacob, that no court would agree with him, and that the Supreme Court would reject his argument unanimously.

Even so, Eastman pushed his theory on Trump, who relentlessly—in public and private—pressured Pence to either reject the electors outright, handing the contest to Trump, or to announce a delay in certification. Such a delay would let states where Trump had alleged fraud send new slates of electors. In a speech at the Ellipse on January 6, Eastman called for Pence to follow the plan. Minutes later, Trump addressed the crowd, repeatedly demanding that Pence show the “courage” to declare Trump the winner of the election.

Trump later incited the mob with a tweet denouncing Pence after he refused to do the president’s bidding. Insurrectionists stormed the Capitol. Even then, Eastman continued to push his unlawful plan. In an email sent just before midnight on January 6, he claimed—ridiculously—that the holdup in vote-counting caused by the riot had violated the Electoral Count Act, and he urged Jacob to tell Pence to “consider one more relatively minor violation” of the law by announcing a delay in the vote certification.

Further evidence that Eastman knew his plan was illegal: He emailed Rudy Giuliani later, saying, “I’ve decided that I should be on the pardon list.” And when subpoenaed to testify by the committee, he invoked his Fifth Amendment right against self-incrimination 100 times—despite having discussed the same issues with media outlets.

Eastman wasn’t alone in pushing tactics he knew were unlawful. White House attorney Eric Herschmann, in a deposition played during Thursday’s hearing, testified that he’d spoken with Giuliani by phone the morning of January 6, and Giuliani had agreed with his argument that Pence did not have the authority to reject electors. “He said, ‘I believe that you’re probably right,'” Herschmann recounted. A few hours later, Giuliani told the Ellipse crowd that Eastman’s plan was “perfectly legal.”

Mark Meadows, Trump’s chief of staff, also aided in the plot to keep Trump in power,  even though, according to a deposition by Pence’s former chief of staff, Marc Short, Meadows had told Short he “agreed” that Pence did not have the authority that Trump and Eastman publicly claimed.

In his own videotaped deposition, then Trump spokesman Jason Miller said Trump advisers considered Eastman “crazy” and his plan “nutty,” and acknowledged that Biden had won fairly. But in a Fox News clip the committee showed on Thursday, Miller, just before January 6, had pushed for Pence to overturn the results—Trump supporters, he warned, would remember any lawmakers who defied their man.

Miller also helped Trump pressure Pence on January 5, helping him craft a tweet that falsely claimed Trump and Pence were “in total agreement” that the vice president had “the power” to block certification of electors.

But that was a flat-out lie. Pence had never agreed to Trump’s scheme, as Thursday’s hearing made clear, and he held firm even as Trump endangered his life on January 6. Pence and his aides spent hours on January 6 hidden in a secure location in the Capitol as insurrectionists chanting “hang Mike Pence” (with Trump’s apparent approval) roamed the halls outside. He refused to leave the Capitol and stayed around to fulfill his duty, certifying Biden’s victory and his own defeat during the wee hours of January 7.

Jacob testified that while hiding with Pence that day, he read the Bible passage Daniel 6, in which Daniel, second in command of Babylon, refuses an order from the king that he cannot carry out, and “does his duty consistent his oath to God.”

Rep. Aguilar: "How did your faith guide you on January 6th?"

Pence former counsel Greg Jacob: "My faith really sustained me through it. Down in secure location pulled out my bible, read through it, took great comfort. Daniel 6 was where I went."

This was a surprisingly affecting moment. It’s just too bad so many of Trump minions lacked the same faith.