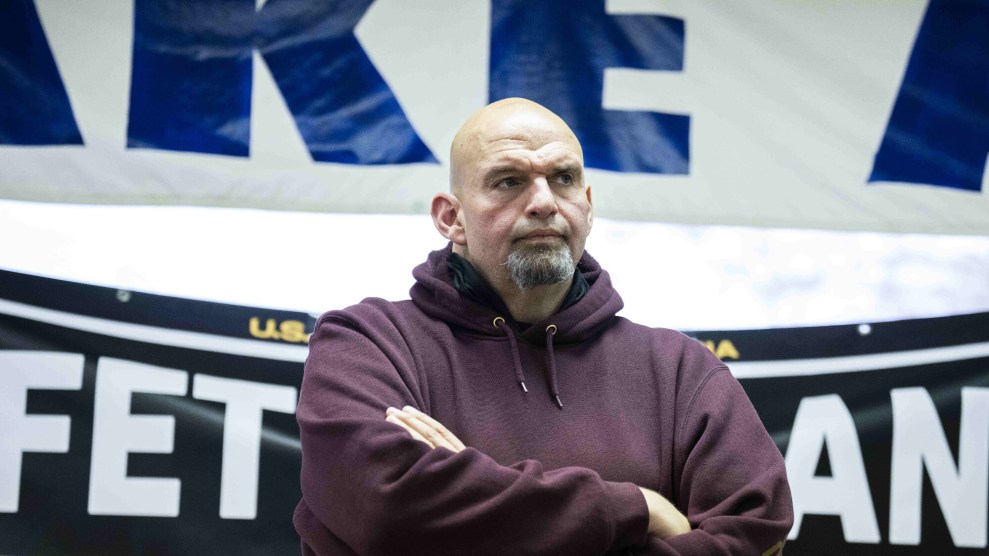 With non-weather-induced cancellations throwing a big wrench into the summer-vacation season, and the Fourth of July holiday travel estimated to bring even more chaos, Fetterman, who is facing Republican television doctor Mehmet Oz in one of the 2022 midterms’ closest Senate races, asked President Joe Biden to do something about it. The Department of Transportation “should start fining airlines up to $27,500 per passenger for every flight they cancel that they knew they didn’t have the staff to fly.”

.@JohnFetterman calls for Biden admin to fine airlines $27,500 per passenger “for every flight they cancel that they knew they didn’t have the staff to fly.” Will be interesting if other Dems back this approach pic.twitter.com/5kETbQnLmL

As Fetterman noted, there was precedent for levying financial penalties against airlines that mistreat and mislead their customers. In the first six months of 2009, airlines had kept passengers on the tarmac for longer than three hours 613 times. In Rochester, Minnesota, for instance, “Passengers were kept for about six hours waiting inside the cramped plane amid wailing babies and a smelly toilet even though they were only 50 yards from a terminal,” the Associated Press reported. In another instance, Air Canada passengers waited for 12 hours.

Being locked in a claustrophobic toilet chamber with nary an Au Bon Pain in sight is a sort of funny curse to imagine inflicting on your worst enemies, but it’s a pretty miserable thing to subject paying customers to. Which is why that summer, the Obama administration imposed a $27,5000 per-passenger fee on airlines that left passengers stranded on the tarmac for more than three hours, without giving them an opportunity to, as the industry is so fond of saying, “deplane.” The rule worked, and such delays soon plummeted.

Fetterman isn’t the only politician calling on the feds to reign in predatory airlines. On Tuesday, Sen. Bernie Sanders (I-Vermont) similarly called on DOT to impose $27,500 fines on airlines that impose lengthy, non-weather-related delays—and fines of $55,000-per-passenger “if they cancel flights that they know cannot be fully staffed.”

As Sanders noted in a letter to Transportation Secretary Pete Buttigieg:

While the price of airline tickets have skyrocketed by 38 percent over the last year, airline delays have increased by 50 percent and cancellations are up by 18 percent compared to where they were before the pandemic. So far this year, one out of every five flights in the United States were delayed, while airlines are cancelling flights four times as often on high-travel weekends than they did in 2019.

And that was after the industry received a hefty federal bailout. Other Democrats, including Rep. Jamaal Bowman of New York, joined the chorus:

Airlines are scamming customers by allowing bookings on flights they know will be canceled due to lack of staff.@SecretaryPete needs to fine them now. They’re exploiting Americans and we’re just letting it happen. https://t.co/8Qfr8zXOdc

As The American Prospect‘s Robert Kuttner has argued, taking on huge corporations that got bailed out with taxpayer money and then treat paying customers poorly is sort of a political no-brainer. People with the means to pay for premium travel tiers and upgrades might not have much of a gripe with air travel, but for normal people, it can just be a cascading series of slights and inconveniences—and that’s when things go well.

Buttigieg, for his part, has acknowledged the airlines’ increasingly unreliability and met with industry representatives about his concerns, but according to the Los Angeles Times, he “wants to see whether there are major flight disruptions over the Fourth of July holiday weekend and the rest of the summer” before taking any enforcement actions. It’s not surprising to see a candidate like Fetterman or a senator like Sanders latch onto air travel’s summer from hell. What’s more surprising is that—for now, anyway—a cabinet secretary who still aspires to be something isn’t barking just as loudly.