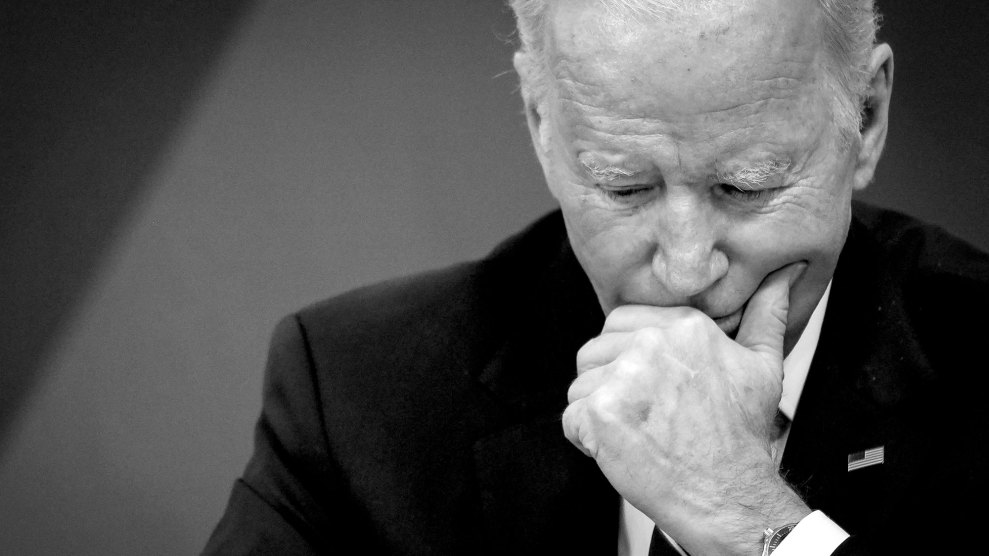 But none of the top Democrats who control two of the three branches of government acknowledged their own power to do much of anything now, including confronting the democratic failures that have brought the United States to this unprecedented place: Justices appointed by presidents elected by a minority of Americans taking away a popular right essential to equality and autonomy for half the population.

Only a handful of progressives are placing the Supreme Court’s decision to overturn Roe v. Wade in the context where it belongs: America’s fraying democracy. “The ruling is Roe, but the crisis is democracy,” Rep. Alexandria Ocasio-Cortez (D-NY) tweeted Saturday. “Leaders must share specific plans for both.”

Several additional progressives in Congress have called for expanding the Supreme Court and abolishing the filibuster to restore abortion rights with federal legislation. Yet no one in Democratic leadership seems to be talking publicly about these possibilities. Despite the dire consequences of Roe v. Wade‘s demise for millions of Americans, there’s almost no urgency from those at the top to propose much of anything other than yet more requests that people vote in November.

To understand the Democrats’ political response to the end of Roe, I spoke with Anat Shenker-Osorio, a progressive messaging consultant, about how to talk about abortion in this new era. Shenker-Osorio has advised both the Congressional Progressive Caucus and the House Democratic Caucus, and also helped craft messaging for campaigns in both Ireland and Australia to repeal abortion restrictions. We spoke just a few hours after the Supreme Court’s ruling in Dobbs v. Jackson Women’s Health Organization on Friday about the politics of abortion and how Democrats are failing to connect abortion rights to other freedoms. (The conversation has been edited for length and clarity.)

As someone who studies messaging and advises Democrats, how are you thinking about what needs to happen next?

One of the things that we learned from the [2018] Irish campaign to repeal the ban on abortion in Ireland, which was massively successful, was “someone you love.” Someone you love will need an abortion someday. And that idea that actually, “Guess what? This is going to impact you, whether your physical body or you via the connection that you have with a sibling, with a co-worker, or with a friend. Someone you love. This is your issue.”

Abortion has to be situated inside of a broader framework, which is the idea that Trump Republicans want to take away our freedoms.

And then the other [message], which is not contradictory, is that abortion has to be situated inside of a broader framework, which is the idea that Trump Republicans want to take away our freedoms. From our freedom to vote and pick leaders who represent us in free and fair elections to our freedom to decide for ourselves whether and when we have children, to our children’s freedom to learn the truth of our history, to our freedom to not be plagued by gun violence. They want to take away our freedoms and rule only for the wealthy white few. We have to draw this exceptionally stark contrast in November between the worlds that the majority of Americans of different political affiliations desire and what this right wing authoritarian faction is doing.

So what you’re saying is basically that people should be talking about the end of abortion rights as part of a larger agenda?

Completely. And I think that what we’re seeing right now, for example, with the January 6 [hearings], is this effort to essentially rule over and not represent us. And so that’s another rhetorical way to draw the connection for people. We see in our research that this is something that people understand: that [the right wing] is hell-bent on overturning the will of the people, whether that be through violent insurrection or through five secretive people in black robes, or through state legislatures that are silencing people’s voices and taking away their votes. They want to overturn the will of the people.

There are some people in the Democratic tent who have been talking about democracy and the connectedness of all of these things. AOC is an example. But it doesn’t seem like the party more broadly or its leaders have wanted to describe this as an issue of democracy. You’re saying they should push further into that territory?

The word “democracy”—not the concept, but the word—is not a particularly helpful one. It’s far too abstract for people to feel any kind of visceral attachment to it. And let’s just be honest with ourselves: For many, many people in our country, including core elements of the Democratic base, they’ve never experienced a democracy. We don’t live in a democracy.

The word “democracy”—not the concept, but the word—is not a particularly helpful one. It’s far too abstract for people to feel any kind of visceral attachment to it.

But democracy is not that particularly helpful of a word, because democracy never bought anybody dinner. It doesn’t connect back to the things that are top of mind for people. And so what do you need to do? You need to draw these broader connections, but you need to attach it back to what feels tangible to people. [Democrats] need to bring it back to what is this going to mean for what I need in my life, and that’s not what the word democracy does, unfortunately.

Do you find a receptive audience when you talk about constructing these broader narratives? Or does it feel like the Democratic Party is doing this piecemeal?

Coming back to abortion, a majority of Americans support Roe and support access to abortion care. The fact that Roe has been overturned is not because people don’t approve of it. It’s not because a majority of the people voted for the president who appointed the justices who overturned it. It must be frustrating trying to get people to vote on an issue that shouldn’t even have to be a thing because the majority is already there for it.

You just handily, compactly explained how we don’t live in a democracy.

Is that why it has to be discussed as a democracy issue? Because the majority is already there and exists?

What we have to do is draw this exceptionally stark contrast between what [voters] believe in, what they want for themselves, for their country, for their children, etc and this authoritarian faction that is hell-bent on taking away our freedoms. So we can’t make an abstract argument about democracy itself. We have to highlight the democracy concept by talking about things like your freedom to decide who governs in your name, your kids’ freedom to learn the truth of our past, your kids’ freedom to be who they are without intimidation, and their freedom to go to school without fearing they’re going to be shot in some mass killing.

With Roe gone, do you see an opportunity to talk about abortion in a different way? While, again, acknowledging the futility that you shouldn’t have to be talking about it in a different way because a majority of people already support abortion rights.

There was a choice made once upon a time to argue Roe on privacy grounds and not equity grounds. What that sounded like in messaging was “US, out of my uterus. Keep your laws off my body. My child, my choice.” That was the second wave feminist refrain: a privacy argument that relies upon a libertarian framework that says, in essence, that government is an interfering terrible force. The reproductive justice critique that was made long, long ago by Black women scholars and leaders was about the inadequacy of that approach. [The privacy approach] delivered us the Hyde Amendment. If you’re making the argument that this is an issue in which government doesn’t belong, then, alright, well, we’re not going to force insurance companies to pay for it. And we’re not going to provide it as part of any kind of national programs. And we’re not going to make state-based medical schools train practitioners in how to do this.

Without relying on this libertarian framework, how can you discuss abortion as a right?

You say: “Someone you love will need an abortion some day and what will you do then? What will they do then?” We need to turn out in record numbers to ensure that Trump Republicans cannot take away our freedoms and the freedoms of our loved ones.

A majority of people have supported [abortion rights] for a while. And that got us here. So in order to make this a turnout issue, Democrats have to convince people that turning out actually will manifest in some change. [Showing them that] when Democrats retain the House majority and grow the Senate majority, these are the ways that we are going to ensure care for your family, and have your freedom and rights respected.