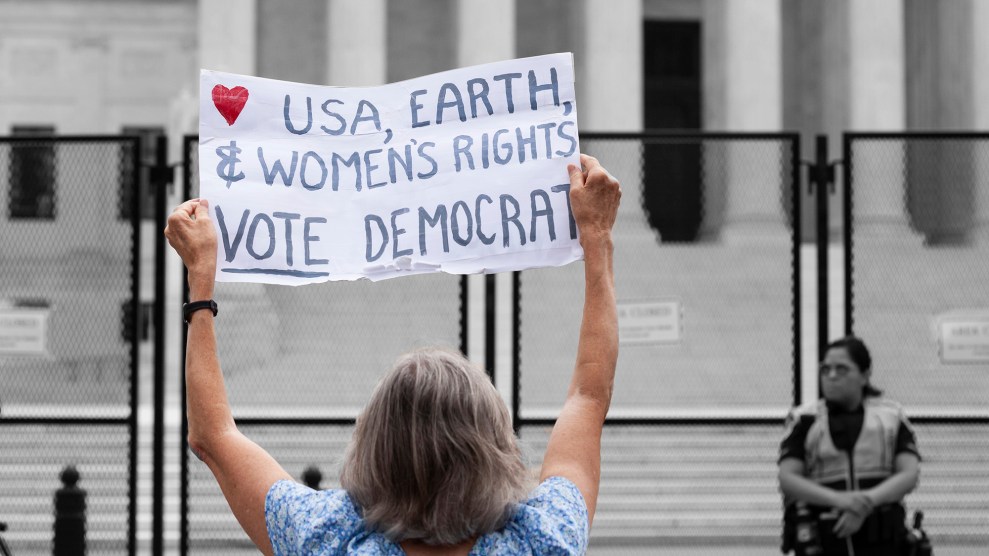 A pro-choice protester's sign at the Supreme Court after it issued its opinion on Dobbs. Allison Bailey/NurPhoto/AP

In the aftermath of the fall of Roe, Democrats dispensed a familiar rejoinder. House Speaker Nancy Pelosi warned that come November, our rights were “on the ballot.” President Biden, in a somber press conference, informed Americans, “Roe is on the ballot.” Sen. Kirsten Gillibrand (D-N.Y.) said she hopes it is clear that the right to end a pregnancy “is the issue on the ballot.” In conclusion: “There is one answer,” Sen. Amy Klobuchar (D-Minn.) declared on Twitter, “VOTE.”

Meanwhile, members of the House took to the steps of the Capitol to sing “God Bless America” over the screams of protesters.

Let’s attempt to cast aside the goofy and the strange. The leaders of the Democratic party—in between firing off donation emails—want you to vote for them. They believe, as Pelosi and everyone said today, that “the rights of women and all Americans are on the ballot this November.”

I keep wondering though: Are they?

After all, many did vote, securing control of Congress and the White House, and the doom cycle has yet to relent. Roe has fallen, mass shootings continue apace, and the current administration has failed to protect voting rights, leaving the elections they warn about in the hands of the minority. Even after it was clear that Roe would fall, national Democrats backed the famously anti-abortion candidate Rep. Henry Cuellar in Texas. His primary opponent, Jessica Cisneros, lost by only a few hundred votes in a runoff.

Would it be worse had we sat at home? Sure. But that’s an exceedingly uninspiring platform, a brick in the face for those who will imminently face deeply personal—and devastating—ramifications after today. As I wrote in May when a draft of the Dobbs v. Jackson Women’s Health Organization opinion was leaked:

One would think that after years of warnings from repro rights groups, we’d be better equipped for this moment. Instead, Democrats have resurrected tired themes for an exhausted crowd. That same fatigue is what makes the instinct to rehash the Trump years at every turn, down to the literal same hats, simply unbearable.

When people donate, they want to see the federal government opening its fat wallet to fund abortion pills. When they protest, they want to see more lawmakers reacting with the same fury Senator Elizabeth Warren had marching alongside demonstrators. When they vote—and deliver control of Congress and the White House—they expect leaders to start acting with all the authority they earned at the ballot. As my colleague Madison Pauly noted at one Oakland protest this week, “the 2017 vibes are strong.” That’s just not going to cut it anymore.

So, to issue, on a day that cuts so deeply, yet another pedantic admonishment to vote isn’t just disappointing. It also carries underlying cruelty: that for you, my anger is a political tactic; a pointless pantomime that vaguely signals you did…something…in response to catastrophe.

“From the very moment of fertilization, a woman has no rights to speak of,” the liberal justices wrote in a scathing dissent. That’s the stark reality of what today means; empty instructions to vote—particularly without backing the Jessica Cisneroses in the field in favor of “God Bless America” chants and continuing to support keeping the filibuster—risk ignoring reality. So are my rights really on the ballot this November? I’m pretty sure they’re already gone.