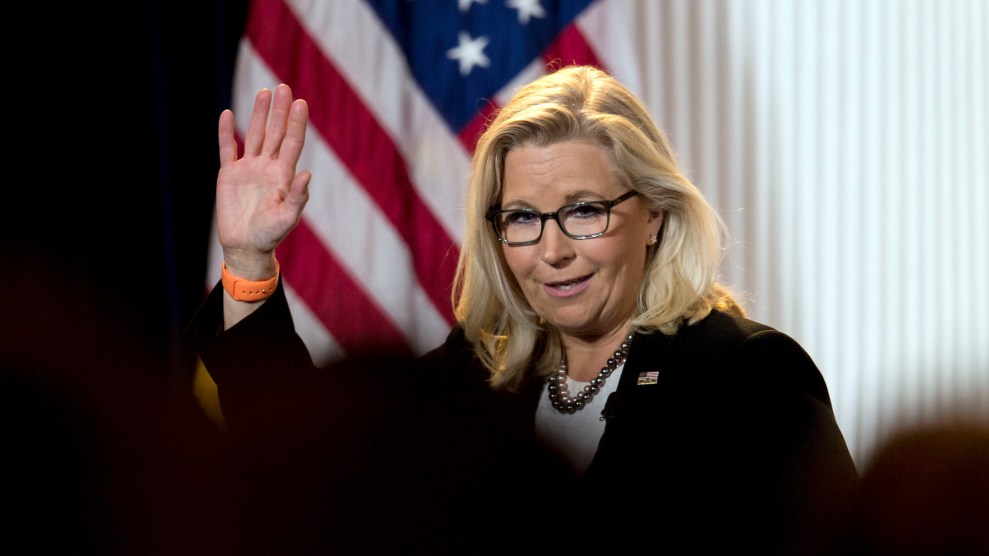 When Liz Cheney first ran for federal office in Wyoming nine years ago, she was undone, in part, by the simplest faux pas: She had improperly obtained a Wyoming fishing license without meeting the one-year residency requirements. It was a potent symbol of a larger issue—that the longtime resident of Northern Virginia was bigfooting into the state, with no respect for its traditions or its three-term incumbent, Sen. Mike Enzi.

Cheney dropped out, soothed hurt feelings, and in 2016 ultimately won a seat in the US House of Representatives. Now, as she seeks a fourth term, it’s not the Game and Fish Commission that stands to doom her prospects, it’s her service on the January 6th Committee. Cheney has been censured and disowned by her state party, and become an outcast among Capitol Hill Republicans, after voting to impeach President Donald Trump for sending a mob to attack Congress, and then taking a lead role as one of just two Republicans on the special committee investigating Trump’s election plot. In May, Trump traveled to Wyoming to campaign for her leading rival, natural resources attorney Harriet Hageman. And on Thursday, after perhaps one of the most gripping and significant hearings in congressional history—and after Cheney had appeared and received a standing ovation at the Reagan Library—Hageman, and three other Republican challengers joined the incumbent for their first debate, in Sheridan.

The verdict from the rest of the field: The hearings are a complete waste of time.

Throughout the debate, Cheney’s opponents defended Trump’s claims of a stolen election and attacked Cheney for her work on the committee and criticisms of the ex-president. In her opening remarks, Hageman charged that “we’re seeing that we have two different systems of justice in this country” because Hunter Biden walks free while “the conservatives who are Republicans are being punished for expressing their First Amendment rights.”

At one point, co-moderator Bob Beck of Wyoming Public Media asked each of Cheney’s challengers why they weren’t more concerned about what was being revealed at Cheney’s hearings, and specifically, “The fact that some leading people from the Trump administration said his goal was to overturn the election.” None of them accepted the premise that there was anything even newsworthy about the proceedings, much less concerning about the former president’s behavior.

“What people are concerned about in terms of the J-6 committee is it’s just totally unfair and so contrary to everything that our country stands for,” Hageman said, while adding that “we have serious questions about the 2020 election.”

Another challenger, self-described “Grassroots God Fearing Conservative” Robyn Belinskey, said that she had “watched several hours of video myself from every angle,” and that “it was a set up from the beginning, from the election situation.” In other words, Trump and the rioters had a point.

State Sen. Anthony Bouchard, who said on a Facebook Live with supporters last year that he had impregnated a 14-year-old girl when he was 18 and then analogized it to “Romeo and Juliet,” called the hearings a “kangaroo court” that usurped the role of “law enforcement.” And he, too, had his concerns about what really happened in the 2020 election:

“To say that elections are always square—we know in several states they used Covid, they used the ballot process—what about Facebook? Using the system to steer people. We know for a fact all the major internets [sic] do that. We also know that there were ballot boxes placed by Mr. Zuckerberg. We know things that happened because of Covid balloting in several states. Georgia doesn’t do something that Wyoming does—they don’t purge that list…”

Georgia famously does purge its voter rolls, as my colleague Ari Berman has been writing about for years, and its elections were particularly clean in 2020—something Bouchard could have learned by watching Georgia’s Republican secretary of state Brad Raffensperger testify at the hearings. And while burning Facebook to the ground might be an area of bipartisan agreement and perhaps even an urgent civic need, what Mark Zuckerberg personally did in 2020 was provide $419 million in funding to a non-profit that helped local election offices stay fully staffed and equipped, in the face of the pandemic and its attendant budget crunch. It wasn’t stuffing the ballot boxes; it was making sure people could access ballot boxes.

“What people are concerned about in terms of the J-6 committee is it’s just totally unfair and so contrary to everything that our country stands for.”

“What I think that you see in terms of the election integrity issues are what we’ve seen more on the national level that has a lot of people concerned, including me. You know, the 2000 Mules movie, is something that I think we have great concerns about, in terms of the use of the drop boxes,” she said, referencing a new film by Dinesh D’Souza. (The movie’s central claim, of widespread fraud, was refuted by none other than Trump’s attorney general, Bill Barr—which is perhaps another reason to watch the January 6th hearings.)

Hageman then echoes Bouchard’s claims about Zuckerberg. “Again going back to the Zuckerberg money: Allowing a private individual to capture our county clerks was devastating in our swing states. So election integrity comes back to actually enforcing our laws.”

Cheney was there too, of course, and she gave a spirited defense of the work that looks to be her congressional legacy. She rejected the Trump “cult of personality,” and espoused her support for “limited government, low taxes, and a strong national defense.” She claimed the mantle, as she has through the last few years, as the true champion of the party of both her and her father.

.@Liz_Cheney: "The Republican Party has a long and a storied history of embracing the conservative values that I believe in very strongly of limited government, low taxes and a strong national defense, but we are now embracing a cult of personality and I won't be part of that." pic.twitter.com/UWKjEQWhKT

The danger for Cheney—and the rest of us—is that with this answer, at least, Hageman had her facts right.