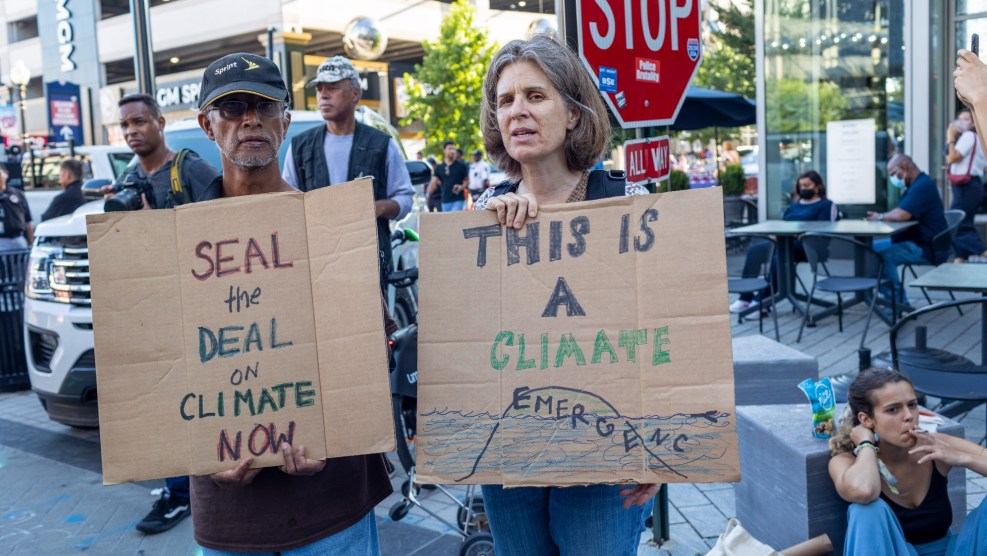 The US is, following decades of political rancor and fossil fuel industry obfuscation, on the verge of its first significant attempt to tackle the climate crisis. Experts say it will help rewire the American economy and act as an important step in averting disastrous global heating.

Independent analysis of the proposed legislation, known as the Inflation Reduction Act, shows it should slash America’s planet-heating emissions by about 40 percent by the end of the decade, compared with 2005 levels.

This cut would bring the US within striking distance of a goal set by Joe Biden to cut emissions in half by 2030, a target that scientists say must be achieved by the whole world if catastrophic global heating, triggering escalating heatwaves, droughts and floods, is to be avoided.

“This is a massive turning point,” said Leah Stokes, a climate policy expert at the University of California, Santa Barbara. “This bill includes so much, it comprises nearly $370bn in climate and clean energy investments. That’s truly historic. Overall, the IRA is a huge opportunity to tackle the climate crisis.”

The climate provisions in the legislation—totaling $369 billion, to be exact—are pared back from what Biden initially wanted. Excruciating negotiations with Joe Manchin, the coal company-owning West Virginia senator and a swing vote for the bill, ended up in a reduced compromise.

But its heft can still, argued Brian Schatz, another Democratic senator, be considered “by far, the biggest climate action in human history”. Biden said the bill was a “huge step forward”.

If Democrats are able to muster all 50 of their Senate votes for the bill, overcoming uniform Republican resistance to acting on the climate emergency, billions of dollars will go towards investments in renewable energy such as wind and solar, rebates for people wishing to buy electric cars and support for households to make them run on clean electricity and become more energy efficient.

In sum, the bill will cut US emissions by between 31 percent and 44 percent below 2005 levels by 2030, according to Rhodium Group, a non-partisan research firm. A separate analysis by Energy Innovation, another research house, has found a similar reduction, of between 37 percent and 41 percent this decade. In total, around 1 billion tons of greenhouse gases, which is more than double the total annual emissions of the UK, would be eliminated in this timeframe.

The range of estimates depends on factors such as future economic conditions, but experts say the bill will set off a cascade of positive impacts, pushing fossil fuels out of the energy grid, dampening America’s thirst for oil, and making wind and solar, which have already plummeted in cost in recent years, even cheaper.

“This bill will really turbocharge that transition to clean energy, it will transform markets where already solar PV, wind, and batteries are in many cases cheaper than incumbent fossil fuels,” said Anand Gopal, executive director of policy at Energy Innovation.

“This is a dramatically large climate bill, the biggest in US history if it passes. It doesn’t mean the US won’t need to do more to achieve its emissions goals but it will make a meaningful difference.”

“This is a dramatically large climate bill, the biggest in US history if it passes. It doesn’t mean the US won’t need to do more to achieve its emissions goals but it will make a meaningful difference.”

The bulk of the bill is composed of tax credits aimed at unleashing a boom in clean energy deployment, along with payments to keep ageing nuclear facilities and other sources of low-carbon energy online. A new system of fees will be imposed to stem leaks of methane, a potent greenhouse gas, from oil and gas drilling operations. The vast fleet of trucks used by the US Postal Service would go electric.

Consumers will be able to access a rebate of up to $7,500 for a new electric vehicle, or up to $4,000 for a used car, along with up to $8,000 to install a modern electric heat pump that can both heat and cool buildings. Further rebates are also on offer, such as $1,600 to insulate and seal a house to make it more energy efficient.

These actions would cut emissions while having other significant benefits. As many as 1.5m jobs would be created in new clean energy roles, according to Energy Innovations, while Rewiring America, another research firm, has forecast that households that install a heat pump, rooftop solar, and use an electric car would save $1,800 a year on energy bills.

Meanwhile, thousands of deaths would be avoided, predominantly among people of color who have to suffer air pollution from nearby fossil fuel infrastructure. “If you live next to a power plant that is pumping out toxins, that is the primary concern for you here, not climate change,” said Gopal.

The legislation is also an attempt to wrest momentum back from China, which has become the world’s leading manufacturer of solar panels, batteries, and other clean energy materials. There are billions of dollars in incentives for the US domestic production of wind turbines, solar panels, batteries, carbon capture and storage, and other technologies.

This, in turn, would help proliferate these technologies in the US and make it easier for federal agencies to issue stricter pollution rules for cars, trucks, and power plants. Meanwhile, the international effort to prevent the world warming by more than 1.5C (2.7F) beyond pre-industrial levels, hampered so far by a patchy American response to the climate crisis, would receive a major boost.

“You’ll have a lot of mutually beneficial impacts,” said Gopal. “This should change the way the US is viewed on the global stage and will encourage better pledges from other large emitters such as China and India. Increasingly I’m more optimistic that keeping the temperature rise under 2C (3.6F) is more reachable. 1.5C is a stretch goal at this point.”

Climate advocates have criticized elements of the bill, such as Manchin’s successful insistence that oil and gas drilling leases in Alaska and the Gulf of Mexico are included, along with a stipulation that millions of acres of federal land and water are opened up for fossil fuels if they are to be also accessed by solar and wind developers. Such a deal is a “climate suicide pact”, according to Brett Hartl, a campaigner at the Center for Biological Diversity.

But the Energy Innovation researchers insist the clean energy benefits of the bill easily outweigh any extra emissions from new drilling, with every ton of new emissions offset by at least 24 tons of emissions avoided by other provisions. The US would, much later than most other large economies, finally have a long-term climate roadmap.

“I wouldn’t have put those leases in the bill but the climate side comes out way ahead,” said Gopal.

“Is this legislation the size of what we need for the climate? No. Is it extraordinary given the politics and the Senate we have? Yes, it’s incredible. We can’t make up for the lost time of US inaction—we can see the price the world is paying for that right now—but it’s not too late. This can make a massive difference.”