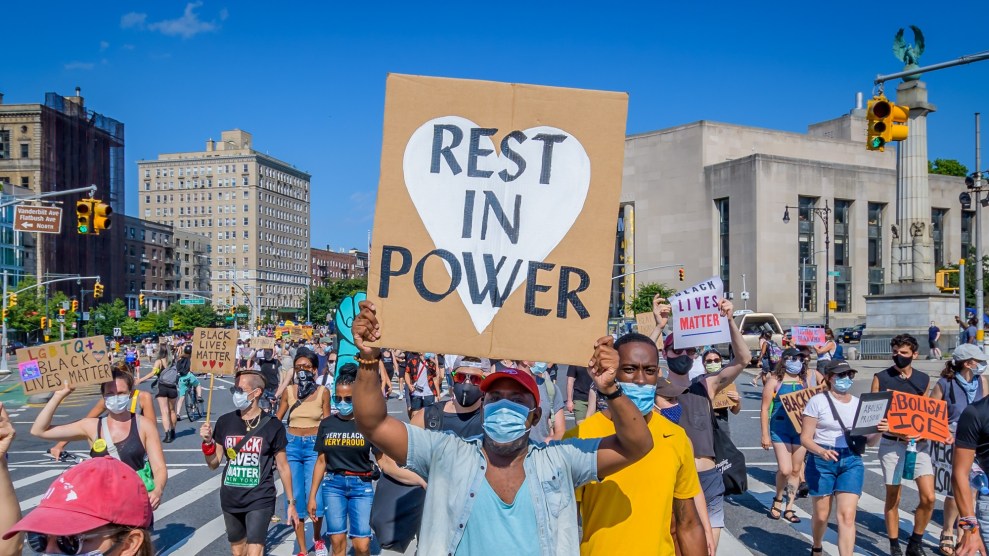 On September 8, Queen Elizabeth II passed away. Since then, there has been a global outpouring of grief as Brits mourn the death of their longest reigning monarch.

However, I hope that in this time of grief, we can also take a moment to self-reflect. Recently, I’ve noticed a lot of people and publications using the term “rest in power” in lieu of the traditional “rest in peace” to memorialize the queen. Most notably, E! News used the term to eulogize the 96-year-old monarch in a now deleted tweet that read: “The end of a royal era. Rest in power Queen Elizabeth II.”

And they got criticized. Heavily. Hundreds of Twitter users called out the online magazine’s tone-deaf wording, noting that the turn of phrase is associated with racial and social justice movements and that it’s not really appropriate in this context. At first glance, what E! News did may not seem like a big deal. The queen was, after all, a symbol of power for an entire nation. But it’s worth digging into the history of the saying to understand why readers objected.

delete this. “Rest In Power” is for oppressed peoples, not oppressors.

Finding the exact origins of a phrase can be tricky. But according to etymologist Barry Popik, the term “rest in power” was originally coined in the early 2000s, after the death of Bay-area graffiti artist and community activist Mike “Dream” Francisco. According to Popik’s findings, it was first used in a newsgroup honoring the artist’s legacy after he was tragically shot and killed during an armed robbery. Francisco himself was Filipino, but “rest in power” has since taken root within Black culture.

In 2005, the phrase appeared in a number of California publications memorializing young victims of violence. It spread more widely on the internet in the early 2010s and was used to honor the deaths of hip-hop artists and Black musicians. However, it really gained traction in 2014 after the death of Mike Brown. The unarmed 18-year-old was killed by officer Darren Wilson in Ferguson, Missouri, kickstarting waves of protests demanding racial justice and police accountability across the country.

“Rest in power” has been transformed from a rallying cry of the oppressed to a trendy Twitter slogan that anyone can slap onto a half-assed micro-eulogy.

In the same year, the phrase was also used to eulogize Leelah Alcorn, a 17-year-old transgender girl who died by suicide. As movements like Black Lives Matter gained increasing momentum, the term was used more and more to memorialize those who’d lost their lives to systemic violence and to honor powerful and influential people in marginalized communities.

In 2017, a six-part docuseries titled Rest in Power: The Life and Legacy of Trayvon Martin premiered on Paramount and BET, detailing the death of the unarmed 17-year-old and the national outrage that followed. The phrase was used frequently to mourn the death George Floyd, who was murdered by police officer Derek Chauvin in 2020.

“Rest in power has been used by the African American and LGBTQ communities to mean that the struggle is not over; the deceased can rest, but gives power to others,” wrote Popik.

However, as time goes on, the words have begun to lose some of their connections to their activist roots. Now, everyone gets to rest in power. Musician Eddie Money—rest in power. Barbara Bush—rest in power. The queen is just the latest white, wealthy, and powerful honoree. “Rest in power” has been transformed from a rallying cry of the oppressed to a trendy Twitter slogan that anyone can slap onto a half-assed micro-eulogy.

Unfortunately, this is nothing new. We’ve seen this co-opting of Black culture time and time again. Dating as far back as the 1920s, words, sayings, and mannerisms from Black culture have regularly been appropriated, oftentimes with their original meanings stripped away and repackaged for public consumption. Most recently, the word “woke” suffered a devastating rebrand from Black activist maxim to conservative dogwhistle for anything even remotely progressive.

While the co-optation of “rest in power” isn’t as ill-intentioned as the misappropriation of “woke,” the outcome is pretty similar.

Just like “woke” before it, rest in power’s original meaning is being whitewashed. Telling someone to “rest in power” has become less about acknowledging that people died at the hands of unjust systems and more about celebrating any vaguely influential person who’s ever existed.

As beloved as the queen was, she is not a symbol of empowering the oppressed. To many people, she is the very symbol of their oppression. Using this term for the monarch of an empire that had once colonized much of the world, leaving devastation in its wake, is at its best tone deaf and at its worst pretty disrespectful. It erases the social justice roots of a statement that was originally used to express solidarity among marginalized people.

I’m not telling people not to mourn the queen. I just hope we can all be a bit more mindful of the language that we use and the historical context behind it.