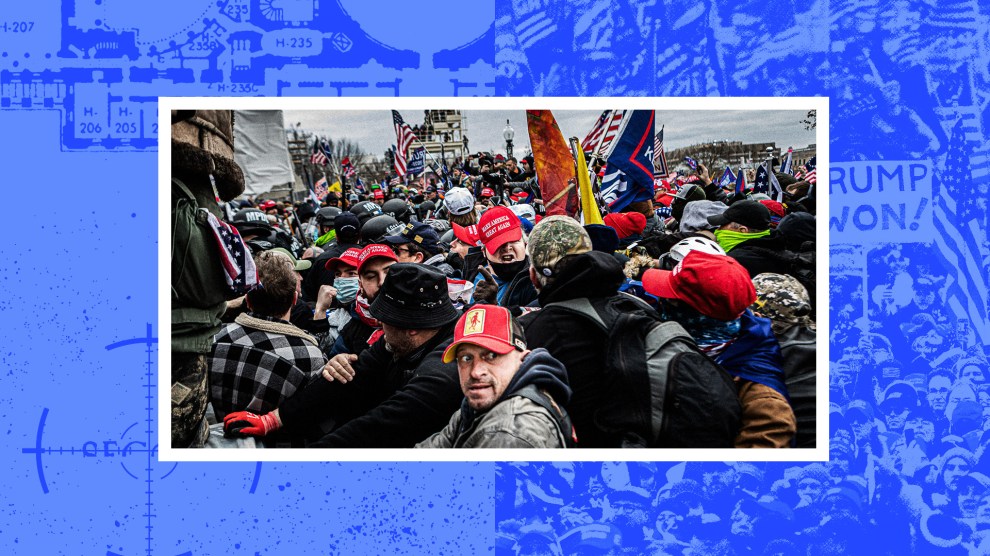 Feel sympathy for the members of the January 6 House Select Committee.

They were handed a task simultaneously easy and arduous: demonstrating to the American public that a president—fully supported by one of the nation’s two main political parties—plotted to overturn election results to remain in office, incited violence to prevent the peaceful transfer of power, and on the day of the riot willfully and malevolently abandoned his duties as a defender of the Constitution.

This is akin to arguing the case that the sky is blue. It’s a simple proposition—unless you are addressing people who refuse to believe reality. The committee’s investigation has confirmed and expanded the ugly story of January 6, reinforcing its importance for Americans who already feared the Trumpian war on democracy, and perhaps encouraging those who haven’t paid close attention to the consequences and implications of that day to do so.  Persuading Trumpland was never in the cards. The sky there is not blue.

The committee’s hearing on Thursday—which is assumed to be its last before the midterm elections, and perhaps its final public session (especially if the Republicans win back the House)—was a retelling of Trump’s attempts to steal the 2020 election, with a few new and startling pieces of evidence sprinkled in.

A key element of demagoguery and authoritarianism is to deny truth, and Trump has illustrated the power of relentless disinformation.

The sordid basic details are well established: Trump prepared to declare victory and claim the election was rigged even before Election Day. Afterward, he hurled a multitude of false allegations and promoted unsubstantiated and loony conspiracy theories. He initiated multiple (and perhaps illegal) schemes to overturn the results, pressuring state leaders, Department of Justice officials and, ultimately, his own vice president, to join the various plots. He encouraged his irrationally irate supporters to flock to Washington on January 6 and then, though he’d been told that many in the crowd were armed with weapons and tactical equipment, urged them to march on the Capitol. As the insurrectionist riot spread, he inflamed the marauders with a tweet attacking VP Mike Pence, watched the violence unfold on Fox News, and for hours did nothing to call off his cherished mob.

All of this has been proven. We don’t need more congressional hearings for that. Only Trump cultists deny this reality. Yet in our broken political culture, it is a noble and important mission for the committee to rebroadcast this tale. Trump and the other high-level  coup plotters have (so far) escaped accountability. And the party that supported—and still supports—Trump is stocked with election deniers and January 6 dismissers and is now poised to gain control of one or both chambers of the very Congress its own voters attacked. Trump recently vowed that if he is elected president again he would pardon his Capitol brownshirts. In the face of this endorsement of political violence, the horrors of January 6 and the scheming that led to it need to be revisited repeatedly.

A key element of demagoguery and authoritarianism is to deny truth, and Trump has illustrated the power of relentless disinformation. Declare falsehoods over and over—about the election, about the Russia scandal, about just about everything—and you can prevent a clear public understanding of important matters. You can cover up reality with lies, especially if you’re willing to proclaim your lies repeatedly. That’s why it is crucial for defenders of the truth to revisit, repackage, reiterate, and reaffirm reality.

The members of the January 6 committee understand that. They saw the need to counter Trump’s false narrative that their investigation was another hoax, to keep this tragedy fresh on America’s mind in an era of hour-long news cycles and national amnesia, and to do all of this before the electorate choses a new Congress. The power of Thursday’s hearing was not in the new information it revealed but in the storytelling. The public cannot be reminded often enough: A president tried to demolish our constitutional order, and he remains the Dear Leader of the GOP.

The new footage revealed by the committee was yet another visceral reminder of the day democracy nearly died in the United States.

The committee did make news by voting unanimously to subpoena Trump—a historic move. One can only guess how that will play out. (Some reporters at the hearing speculated that Trump would welcome the opportunity to come before the committee. I doubt it.) The committee also revealed numerous Secret Service emails and other documents indicating that the feds knew in advance that Trump loyalists were planning a violent raid on the Capitol to halt the Electoral College vote certification.

This disturbing new evidence shows how extreme Trump’s shock troops were as they discussed the acts of violence that might be necessary on January 6.

Trump aide Jason Miller bragged to Mark Meadows about firing up participants on a pro-Trump website that was a cesspool of extremism and violent threats. pic.twitter.com/pWgnDKOk6L

More than ten days before the attack, the Secret Service had received information that the Proud Boys planned to “march into DC literally armed” and “kill people.”

The Secret Service had advance information—more than 10 days beforehand—regarding the Proud Boys planning for January 6th. We know now that the Proud Boys and others did lead the assault on our Capitol building. pic.twitter.com/1118rayg5g

The committee also released previously unseen video of congressional leaders during the assault. The haunting footage captured House Speaker Nancy Pelosi and Senate Majority Leader Chuck Schumer placing calls to the Pentagon, the Justice Department, and nearby governors, urgently seeking their assistance to quell the assault.

This previously unseen footage shows Congressional leaders—both Republicans and Democrats—as they were taken to a secure location during the January riot.

Everyone involved was actively working to address the violence. All of them did what President Trump refused to do. pic.twitter.com/fcF4zBLGWm

The new footage is yet another visceral reminder of the day democracy nearly died in the United States.

Throughout the committee’s (possibly) final hearing, its members made sure to depict Trump as a clear and present danger—then and now. Rep. Liz Cheney (R-Wyo.), whose gutsy work on the committee has cost her her House seat, proclaimed the “central cause of January 6 was one man: Donald Trump.” Rep. Adam Kinzinger, the other Republican on the committee, decried Trump for trampling the rule of law to “stay in power.” Rep. Jamie Raskin (D-Md.) exclaimed that Trump “betrayed” his oath to defend the Constitution. Rep. Bennie Thompson (D-Miss.), the chair of the committee, pronounced there was “no doubt” that Trump mounted an effort to undermine the republic.

All these remarks are sky-is-blue obvious. The great tragedy—more tragic than the events of January 6—is that these truths are not accepted by tens of millions of Americans, and that January 6 has not fundamentally reshaped the political landscape. Worse, Trump’s lies continue to animate the Republican Party, feed right-wing extremism, and fuel new assaults on democracy.

Whatever happens with the committee—which is continuing its work for now and is expected to release a final report after the elections—there will remain the need to retell the story of January 6, over and over and over again.