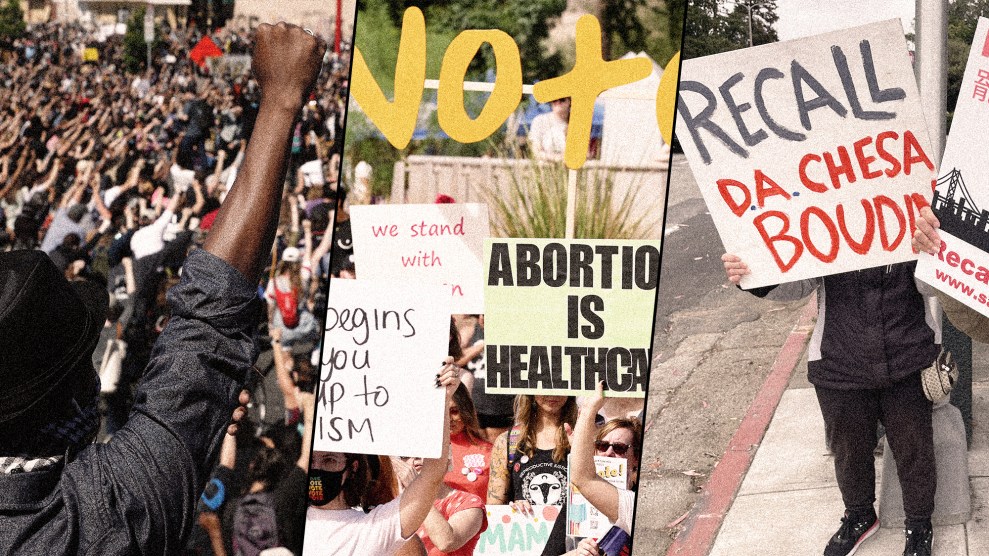 If you care about police accountability, abortion rights, or racial justice, you should be paying attention to district attorney races this election season.

As chief prosecutors in their counties, DAs hold a lot of power to choose who gets charged with a crime and who doesn’t: They can flat-out decide to never prosecute a specific offense, whether it’s terminating a pregnancy or possessing some weed—especially if there are other types of violations they want to take more seriously, like police brutality or corporate malfeasance.

But reformist candidates hoping to curb mass incarceration or keep cops in line will face a big challenge at the polls this year. Widespread concerns about violent crime could give their more moderate or conservative opponents a boost, all at a time when it’s unusually difficult to know whether the nation’s lawlessness is actually rising or falling.

Here are four DA races that we at Mother Jones are watching:

Minneapolis will soon hold its first prosecutor election since George Floyd’s murder, and voters will choose between two candidates with vastly different views of the anti-police protest movement his death inspired.

The election is “a referendum on what we want to do as a community moving forward since George Floyd was murdered.”

Front-runner Mary Moriarty, the county’s former chief public defender, is a longtime critic of the Minneapolis Police Department who wants to create a police accountability unit within her office. She argues that holding cops accountable will reduce crime by improving the quality of their work. Her opponent, Martha Holton Dimick, a retired judge and former prosecutor, likewise cites accountability as a goal, but she’s endorsed by the same law enforcement group that paid the legal expenses for the officer who killed Floyd, casting doubt on her willingness to charge officers who use excessive force. She has also repeatedly blamed the defund-police movement for a spike in shootings—even though, as Mother Jones previously reported, Minneapolis actually increased police funding in the last couple of years, and numerous studies suggest that anti-police protests don’t lead to an uptick in gun violence. One often-cited analysis of 60 cities found no correlation between the number of Black Lives Matter protests in a particular place and the size of that location’s homicide surge in 2020.

The election is “a referendum on what we want to do as a community moving forward since George Floyd was murdered,” Malaika Eban, deputy director at the nonprofit Legal Rights Center in Minneapolis, recently told my colleague Eamon Whalen, who wrote about the race in depth. The candidates, Whalen wrote, “embody two sides of a debate” over public safety “that has divided Minneapolis and the nation since the summer of 2020.” Moriarty finished first in the primary over the summer with 36 percent of the vote, while Holton Dimick scored 18 percent.

After San Franciscans ousted reformist DA Chesa Boudin in a nationally watched recall election this summer, they will now decide whether to retain Brooke Jenkins, the mayor’s pick for his interim replacement, who took office in July.

Jenkins describes herself as a progressive reformer, too, but she’s rolled back many of the policies that Boudin hoped would make the legal system fairer to low-income people and people of color. She allowed her office to resume requests for cash bail, for example, and says her team may start charging some teenagers as adults. She also launched a “war on fentanyl,” the highly addictive opioid, and is trying to keep more drug dealers behind bars while the police likewise crack down on drug users.

But these policies do not appear to have immediately made the city safer: Compared with a year earlier, violent and property crimes rose slightly in San Francisco after Jenkins took office, according to police data highlighted by SFGate. Meanwhile, less than a month from the election, retired Superior Court Judge Martha Goldin (a Boudin supporter) filed a state bar complaint accusing Jenkins of lying about her record of prosecutorial misconduct and the nature of her work with the anti-Boudin recall campaign. (Jenkins denied the allegations, which she described as “baseless” and “politically motivated.”) Other critics argue Jenkins lacks enough independence from the mayor’s office, which sent a staffer to sit in on some DA meetings after she took office.

But whether these allegations will derail her election remains to be seen. Her two main opponents are John Hamasaki, a former police oversight commissioner with the Democratic Party endorsement, and Joe Alioto Veronese, another former police oversight commissioner whose grandfather was San Francisco’s former mayor and whose family has deep ties to the city and ran a popular but now closed Sicilian seafood restaurant on the waterfront. Policy-wise, Hamasaki positions himself left of Jenkins while Alioto Veronese is another moderate, but they were both trailing her pretty significantly in a recent poll.

Though San Francisco is racking up much of the attention, don’t forget about nearby Oakland and Berkeley, just over the bridge: The results of their county’s DA election could help quash the loud national narrative that Boudin’s ouster in San Francisco was a death knell for progressive criminal justice reform in the Bay Area.

Front-runner Pamela Price is a longtime civil rights attorney who shares many similarities with Boudin, including her opposition to cash bail and her promise to never charge teens as adults. She also pledges to never seek the death penalty or life-without-parole sentences, to lean on restorative justice programs that promote healing without incarceration, and to hold police accountable for misconduct.

Whoever wins would become Oakland and Berkeley’s first Black DA.

Her opponent, career prosecutor Terry Wiley, has worked in the DA’s office for more than three decades and touts his experience as an advantage. He’s more moderate than Price, arguing that prosecutors sometimes need the option of pretrial detention and life without parole as a way to keep communities safe after a violent crime.

No matter the results, this election will be historic: It’s the first time in 80 years that Alameda County’s DA race has not featured an incumbent, and whoever wins would become the first Black person to take the position. Plus, the stakes could hardly be higher. After earlier successes reducing gun violence, Oakland has seen shootings soar since the pandemic began. Conditions at the county jail are abysmal, and the sheriff’s office is under fire for hiring dozens of deputies who failed their psychological evaluations.

The stakes are also high in Maricopa County, Arizona, especially around abortion rights.

The county prosecutor’s office there—the third biggest in the country—is led by Rachel Mitchell, who made national headlines in 2018 when Republicans invited her to the confirmation hearings for Brett Kavanaugh, the now-Supreme Court justice who recently helped overturn the constitutional right to terminate a pregnancy. Back in May, prior to that court decision, Mitchell told a criminal justice reporter at the Appeal that if the procedure became illegal, she would prosecute people who obtained or provided one. More recently she scaled back that rhetoric and promised not to go after abortion patients—but she left open the door to bring their clinicians to court.

Her opponent, Democrat Julie Gunnigle, has pledged not to prosecute any abortion cases. “I will never criminalize pregnant people, their support networks nor health care providers for private and personal health care, including abortion,” she told the Arizona Republic in an interview.

As of September, Arizona law prohibits almost all abortions after 15 weeks of pregnancy. Courts in the state are also considering whether officials can enforce a much older law from 1864 that would ban the procedure at any time, except when the patient’s life is in danger. All of which means that the candidates’ promises will likely be put to the test soon after the election, with huge and immediate consequences for people who get pregnant.