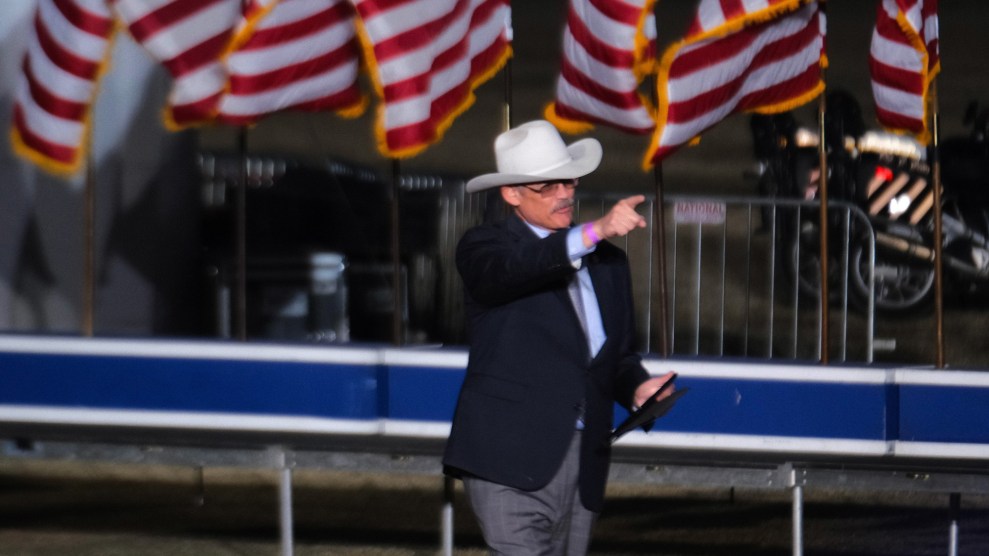 If Mark Finchem, the Republican candidate for secretary of state in Arizona and a QAnon-friendly election denialist who was recently accused of antisemitism and who days ago attended a conference with conspiracy theorist extremists, wins on Tuesday, he will soon oversee all the state’s elections, including the upcoming 2024 presidential contest. That possibility has long had Democrats and democracy activists worried. And in the weeks before Election Day, Finchem’s ties to far-right fanatics who have engaged in armed acts of voter intimidation have provided even more reason for concern.

In Arizona, as early voting has been underway, several right-wing groups have tried to deploy volunteers—sometimes armed—to monitor ballot drop boxes. This effort has included taking photos or videos of voters and posting online information about them. One group called Clean Elections USA, which is led by Melody Jennings, a supporter of the QAnon conspiracy theory, has staked out drop boxes in Maricopa County to watch for so-called “mules”—people who illegally dump multiple ballots at these collection sites. The “mules” conspiracy theory has been championed by conservative activist and one-time felon Dinesh D’Souza in his widely and fully debunked 2000 Mules pseudo-documentary. (The truth: Mules don’t  exist.) And in Yavapai County, a group associated with the Oath Keepers militia and another outfit called Lions of Liberty mounted “Operation Dropbox” to monitor all the collection boxes in that county and have their “patriots” report alleged incidents of “ballot box stuffing” to the county sheriff.

The League of Women Voters late last month sued Clean Elections USA, the Oath Keepers-related organization, and Lions of Liberty, claiming these mules-hunting activities amounted to “voter intimidation” and sought an injunction to halt their dropbox surveillance programs. The Yavapai County groups agreed to suspend their operations and were dismissed from the case. Days ago, US District Court Judge Michael Liburdi, who had been appointed by former President Donald Trump, issued a temporary order curtailing Clean Elections USA’s actions, and the group agreed to refrain from confronting voters within 75 feet of the drop boxes and from openly carrying weapons within 250 feet. “It is paramount that we balance the rights of the defendant to engage in their constitutionally protected First Amendment activity with the interest in the plaintiffs and in voters casting a vote free of harassment and intimidation,” Liburdi said.

Finchem, long a member of this paranoid milieu of militia-related dropbox-watchers, has championed their efforts. In mid-October, he tweeted, “WATCH ALL DROP BOXES. PERIOD. SAVE THE REPUBLIC.”

WATCH ALL DROP BOXES. PERIOD. SAVE THE REPUBLIC.

And after the vigilante monitors began showing up bearing weapons at drop boxes, Finchem defended them, saying “We’re an open carry state, people can watch those boxes.” Even if they happen to be volunteers wearing military-style armor and brandishing assault weapons.

These are his people. A former public safety officer in Michigan who left his job with a poor performance evaluation, Finchem has claimed to be an Oath Keeper himself, and for his secretary of state campaign, he has raised nearly $10,000 from donors linked to that far-right extremist organization.

Finchem, who was on the Capitol steps during the January 6 riot, is part of this network of election denialists and militia extremists promoting falsehoods about elections. In August, he attended an event organized by True the Vote, a rightwing group that promotes debunked election conspiracies (and helped D’Souza produce 2000 Mules), and two conservative sheriffs associations that challenge the authority of the federal government—Protect America Now and the Constitutional Sheriffs and Peace Officers Association (CSPOA). At this gathering, election monitors were actively recruited. The so-called “constitutional sheriff” movement led by CSPOA claims that the ultimate law enforcement authority in the United States resides with sheriffs who can overrule federal and state authorities. As the Southern Poverty Law Center notes, “This idea was pioneered by Christian identity minister William Potter Gale in the 1970s and described as Posse Comitatus.”

Finchem is a fan.

Last year, he welcomed the endorsement of Richard Mack, an Oath Keeper and founder of the CSPOA. Mack has long associated with white nationalists, anti-government extremists, and conspiracy theorists, including Alex Jones. During the infamous 2014 stand-off at the Bundy ranch in Nevada, Mack served as an adviser to the Bundy clan and told a reporter he and his comrades were “actually strategizing to put all the women up at the front. If they’re gonna start shooting, it’s going to be women that are gonna be televised all across the world getting shot by these rogue federal officers.”

At a conference last year, Finchem suggested that members of the Three Percenters, an antigovernment, militia-oriented movement, join Mack’s CSPOA. At this event he also dismissed criticism of the January 6 rioters, saying, “They’re terrified of you. They, the Marxists, who have basically attempted a coup of the people. They are terrified of you. Why? Because you are not sitting down and shutting up.”

Finchem has also been a champion of True the Vote. When Arizona Attorney General Mark Brnovich last month said the FBI and the IRS should investigate True the Vote for alleged fraud related to the claims presented in 2000 Mules, Finchem, who hosted a public screening of the film, denounced him.

Far-right sheriffs, fraud-promoting election-denying groups, militia-like outfits that intimidate voters—these are Finchem’s allies. He shares their paranoid and unfounded notions. His connections to such fanatics signal how he will manage elections in the crucial swing state of Arizona should he defeat Democrat Adrian Fontes on Tuesday and become its secretary of state. Finchem can be expected to skew the system according to their fever dreams and extremist views. When it comes to how he will handle voting in Arizona, he certainly can be judged by the company he keeps.