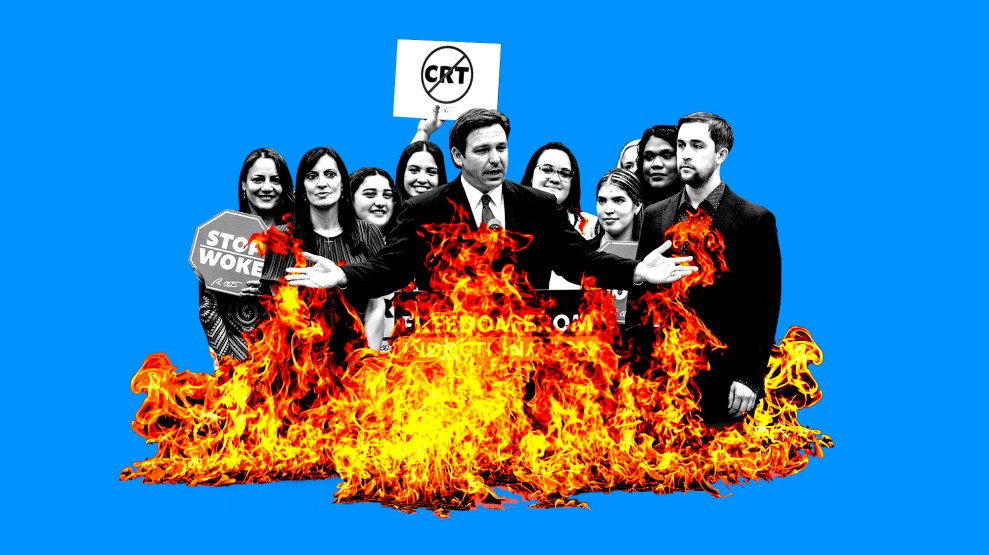 On Election Day, the much-hyped red wave didn’t crest quite as high as some polls predicted it would, with Democrats scoring key victories in several states. Yet it was far from a total wash for Republicans—and in a few places, they made historic advances. In Florida, for instance, incumbent Governor (and likely presidential candidate) Ron DeSantis crushed Democratic opponent Charlie Crist, winning the Republican vote even in traditionally deep blue counties.

The forces behind DeSantis’ victory are many and complex. The fact that he was an incumbent naturally gave him an edge. In addition, he spent much of the last four years positioning himself as the more-MAGA-than-Trump candidate. He jeered at the Biden administration, railed against pandemic protections, and made an over-the-top and roundly criticized show of cracking down on migrants from the southern border (who were from Texas, not Florida). With these strategies, he has broadened his Republican base and made inroads into previously Democratic-leaning blocs, including Latin Americans and millennial and Gen-Z Floridians.

But another group of Florida voters he has strategically cultivated may have been especially significant. In the online Florida politics journal Sayfie Review, political analyst Susan McManus noted that in the last year, more than twice as many Florida women have switched parties from Democrat to Republican than the reverse—some 51,000 in the former category, compared to 20,000 in the latter. Florida’s First Lady Casey DeSantis boasted last week that 1.1 million women had signed on to her Mamas for DeSantis campaign group. “If that number’s correct,” says Aubrey Jewett, a professor of political science at the University of Central Florida, “that’s pretty impressive.” Especially considering the fact that by many measures—maternal and child health, family leave, and pay equity, to name but a few—life for women and children in Florida is not going particularly well. Ron DeSantis has managed to convince women that his brand of family values is good for them—despite abundant evidence to the contrary.

A central—if not the central—part of DeSantis’ approach has been to cater to the growing number of women who have demonstrated their support for what they call parents’ rights. The sheer numbers involved in this movement are difficult to estimate, but the 1.1 million Floridian women who reportedly signed on to Mamas for DeSantis suggests a critical mass. The organizing principle behind this movement is to attack public schools for indoctrinating children into a progressive worldview by teaching about institutional racism and sexual and gender identity.

While these ideas took root before the pandemic, the movement accelerated when parents protested school closures and then mask mandates for students and teachers. Since then, parents’ rights advocates have also vowed to keep schools from mandating Covid vaccines and mobilized to run for and radicalize school boards. DeSantis passed several laws around parents’ rights signature issues—most notably, the “Don’t Say Gay” law strictly limited how teachers can discuss sexual orientation and gender identity; another of his measures bans Covid vaccine requirements at schools. He made the unusual move of endorsing school board candidates—of the 30 parents’ rights candidates he backed, 24 won their races.

This summer, I attended the annual conference of the parents’ rights group Moms for Liberty, where DeSantis gave the keynote address. I watched as the moms waved “Mamas for DeSantis” signs and whooped when he referred to Biden as “Brandon blundering around every time you go get gas.” During his speech, he portrayed Florida as the last bastion of parental freedom. “We’ve had families move across the country,” he boasted, “because they wanted to make sure that their kids wouldn’t be denied an education based on whether or not they took an mRNA vaccine for their minor.”

We’ve had families move across the country because they wanted to make sure that their kids wouldn’t be denied an education based on whether or not they took an mRNA vaccine for their minor.”

But what benefits are those families actually receiving when they move to Florida? The state doesn’t offer any parental leave beyond the federally required 12 weeks of job security. Its Medicaid income cutoff is downright Draconian—a family’s income must be 30 percent of the federal poverty level, currently $26,500 for a family of four. Florida households receiving SNAP benefits get less than the national average. It’s one of only a handful of states that do not provide extra funding to schools with large populations of students from low-income families. A 2021 report by the Annie E. Casey Foundation ranked Florida a mediocre 35th in children’s wellbeing—it found that kids in the Sunshine State were substantially less likely than the national average to have parents with secure employment, to have health insurance, and to graduate from high school on time.

Mothers in Florida aren’t doing so well, either. Between 2018 and 2020, the state had the second-highest number of maternal deaths in the country, behind only Texas. In 2020, just two-thirds of babies in Florida were born to women receiving adequate prenatal care, compared to three-quarters nationally. Florida’s women lack health insurance at a rate of 16 percent, well above the national average of 11 percent, and more than two-thirds of them experience domestic violence, compared to the national average of about 25 percent.

Paradoxically, those societal disadvantages actually may be a powerful driver for women to participate in the parents’ rights movement. The day before the election, I spoke with Rachel Moran and Taylor Agajanian, political scientists at the University of Washington who focus on how disinformation campaigns target communities of women. They’ve studied how multi-level marketing companies use what Moran calls an “idealized versions of femininity” to court stay-at-home moms with few resources. “First and foremost, your character is defined by motherhood,” Moran says. “And supporting that is this idea of freedom, whether that’s financial freedom and entrepreneurialism, or political freedom, which is what a lot of a lot of the misinformation narratives around the election try and tap into.” In the social media spaces she studies, “It’s all trended towards this sense of female empowerment being the power to resist the government rather than empowerment in sort of more traditional senses of the word.”

Not all DeSantis Mamas are stay at home moms. But those observations square with what I’ve noticed in my own reporting on disinformation in women’s spaces. “Protecting kids from dangerous things like forced masking, traumatizing isolation, toxic injections, harmful foods & oppressive government isn’t a #conspiracy theory, that’s just called good parenting,” one post in a Facebook group called Natural Parenting Mommas read. The moderator of a moms’ Facebook group in California told me, “To our detriment, the isolated, exhausted mamas who look to these groups for support at all hours of the day and night may be susceptible to internalizing misinformation that is being shared by armchair experts.”

The parents’ rights movement, the researchers said, does something similar: In its appreciation for the fact that mothers don’t have much agency—and by offering them a sense of purpose—they also seem to promise their families would be protected in an increasingly frightening world. DeSantis and his supporters play to this dynamic when they warn parents that schools will turn their children against them. At the Moms for Liberty conference, I watched conservative podcast host James Lindsay whip up the crowd. Schools, he said, will “make your kid a little sexual weirdo, they come home, they talk to mom, to you. And you’re like, ‘What? I don’t want you to talk like that.’ And it’s, ‘Mom, you don’t understand me. You don’t know, things are different now.’”

The parents’ rights campaign against Covid vaccine mandates, too, plays to parental anxiety. DeSantis Florida Surgeon General Joseph Ladapo has repeatedly made misleading statements about the safety of Covid vaccines for kids. “Based on currently available data, the risks of administering COVID-19 vaccination among healthy children may outweigh the benefit,” Ladapo said. (That’s not true.) For parents who desperately want to protect their children, refusing a vaccine may feel like a way to exert a modicum of control, Moran and Agajanian note. This trend is already hastening serious public health consequences: As I reported last week, Florida’s rates of routine childhood vaccination—think measles and polio—are now also beginning to decline.

As DeSantis eyes a presidential run in 2024, he will almost certainly attempt to translate his parents’ rights victory in Florida onto the national stage—although that strategy could backfire. After all, members of the parents’ rights movement don’t care about all parents’ rights—say, parents’ rights to reduce the number of firearms available to potential school shooters, to keep trans kids safe from harm, or to ensure that their children have access to books about a wide range of human experiences. Several months back, I spoke to a North Carolina mother who watched in horror as Moms for Liberty candidates attempted to take over her local school board. “I’m not worried about someone grooming my son to be a drag queen,” she told me. “I’m worried about someone grooming my son to be a White nationalist.”

Yet DeSantis clearly believes that in these anxious times, his version of parents’ rights will prevail, no matter the costs to marginalized groups. “If you just show people that you’re willing to fight for them,” he observed at the Moms for Liberty conference, “man, they will walk over broken glass barefoot to have your back.”