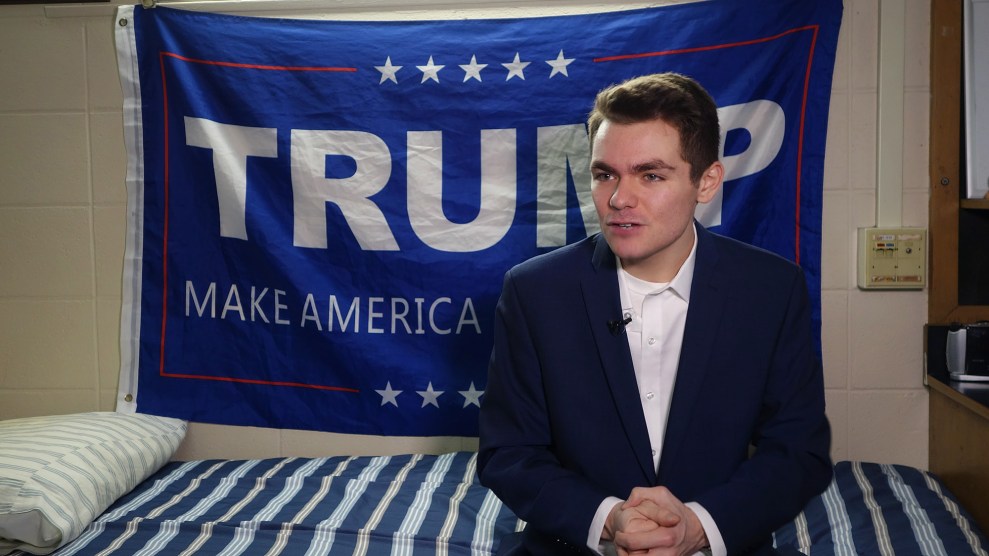 Nick Fuentes answers question during an interview with Agence France-Presse as a college student in Boston, Massachusetts, on May 9, 2016. WILLIAM EDWARDS/AFP via Getty

On Tuesday, Donald Trump, now a candidate for president, had dinner with the white supremacist influencer Nick Fuentes and the rapper Ye, formerly known as Kanye West, to wide condemnation.

Fuentes first gained notoriety for attending the deadly Unite the Right rally in Charlottesville in 2017. He was one of “very fine people on both sides,” as Trump said at the time. As my colleague Ali Breland cataloged last year, Fuentes has a sizable track record. He has denied the Holocaust, opposes interracial marriage, and wishes for a return to Jim Crow segregation, among other racist beliefs. Fuentes recently said he’d prefer a Catholic monarchy to a democracy.

Despite all this, Fuentes has been partially accepted by the Trump wing of the Republican Party. Earlier this year, he hosted Reps. Marjorie Taylor-Greene (R-Ga.) and Paul Gosar (R-Ariz.) at his America First Political Action Conference. (He drew press attention to the event by comparing Vladimir Putin to Hitler—before adding that he meant this as a “good thing.”)

Trump has long emboldened his far-right supporters. But in recent years the alliance between Trump’s movement and the nationalist factions have moved from the shadows to the daylight, as a rightwing movement emerges to legitimize illiberalism in the mold of anti-democratic governments across the world.

According to the Washington Post’s account of the meeting, Ye brought Fuentes with him to Mar-a-Lago. Trump reportedly didn’t appear to know who Fuentes was but soon was taken with the 24-year-old radical who flattered the former president. “Did the president and Nick have a casual conversation about his past presidency, the announcement and style, and polling and prospects of other people coming into the primary, and what young people thought about him?” Karen Giorno, a former Trump adviser who was present for the dinner, told the Post. “Yeah they did.”

Ye recently lost lucrative business deals with several retailers after racist and anti-semitic comments, including tweeting that he would “go death con 3 on JEWISH PEOPLE.” In response, West apparently wants to run for president in 2024 and went to Mar-a-Lago to ask Trump to be his running mate. That suggestion reportedly did not go over well with Trump. Ye, who recently wore a “White Lives Matter” shirt to Paris fashion week, has apparently now befriended a white supremacist. Fuentes expounds his views on his YouTube show called “America First.”

In response to the backlash, Trump claimed not to have known who Fuentes was. “This past week, Kanye West called me to have dinner at Mar-a-Lago,” Trump posted Friday on his social media platform, Truth Social. “Shortly thereafter, he unexpectedly showed up with three of his friends, whom I knew nothing about.” Fuentes is active on Truth Social and in Trump’s broader movement, but it’s possible the former president had not heard of him.

Still, politicians when confronted over their association with Fuentes, often deny knowledge of his beliefs. When Gosar was asked about plans to hold a fundraiser with Fuentes last year, he first defended the move before telling CNN, “I have no idea what’s going on.” After the media confronted Greene for participating in his conference this year, she claimed to have not known Fuentes’s views.

As he begins his third campaign for the White House, Trump is more isolated from the mainstream Republicans. He is attempting to beat off a potential bid from Florida governor Ron DeSantis, who some feel can bring the Trumpian zeal without incidents like this one.

But Trump isn’t cutting a new or unique path to power. Rep. Steve Scalise spoke to a white nationalist conference organized by former Ku Klux Klan leader David Duke in 2002, then years later said he didn’t know what the group believed. Republicans put up with Iowa Rep. Steve King’s white supremacy until it became a political liability. Now, Trump loyalists continue to deny knowledge of who they are associating with even as the connections grow stronger and the meetings more frequent. A horde of neo-Nazis endorsed Trump for a reason.