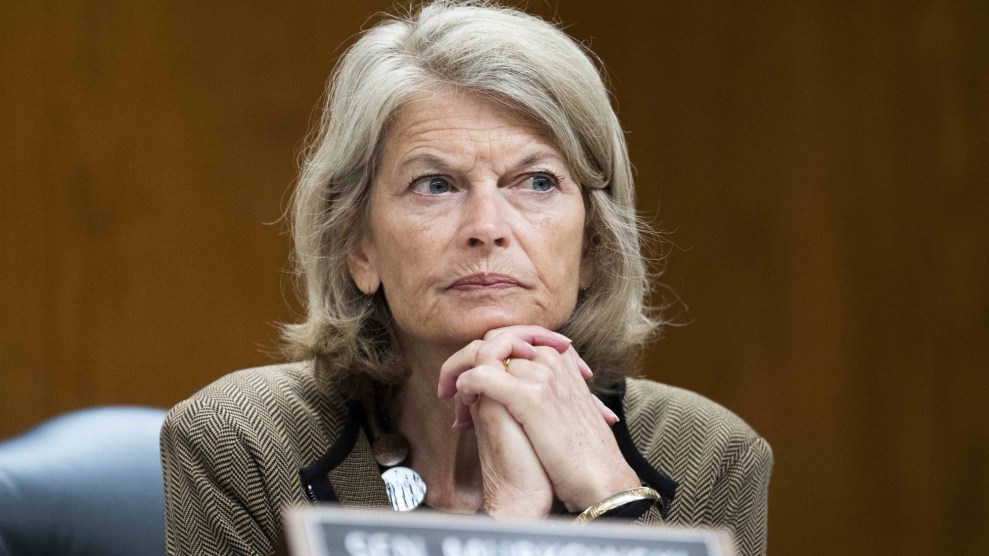 Things looked scary at first for Alaska Sen. Lisa Murkowski, the GOP senator at the top of Donald Trump’s enemies list. After crushing her opponent in the primary, Murkowski found herself behind Trump-backed Kelly Tshibaka for days after  polls closed on November 8th. But by Wednesday night, as the state’s ranked choice voting tabulation concluded, Murkowski soared to a 54–46 win.

Alaska was never going to be a Senate seat that flipped blue—at least not in this election, where the state’s new ranked-choice voting system puts the competition between two Republicans: Kelly Tshibaka (pronounced “Chewbacca,” or pretty close) and incumbent Trump-impeacher Murkowski. Pat Chesbro, a Democrat, trailed far behind with just over 10 percent of first-choice votes. Despite Murkowski’s vaunted independent streak, that’s still about 86 percent of Alaskan voters picking a Republican as their first choice. For now, that puts a hold on the wishes of anyone hoping to see the far north go purple.

But Murkowski’s win should still come as a huge relief for Americans who care about preserving democracy—she’s the only surviving Republican senator in this general election who voted to impeach Trump.

Let’s consider who we almost had: Tshibaka, the Trump and Alaska GOP–endorsed candidate. In her campaign ad, she stands silhouetted against a mountain range, ice floes crashing behind her, looking like the Alaska version of a Gilead housewife as she talks about her parents being temporarily homeless and how she’s the first in her family to get a college degree—both claims that have been debunked by Alaska journalist Dermot Cole. Then we cut to Kelly in what we assume is her home kitchen, where she declares, “I’m a conservative: Pro-life, pro–Second Amendment, and America First.”

Tshibaka’s tried to position herself as a Washington outsider, despite spending nearly 20 years inside the Beltway, working for various federal inspectors general, before her return to Alaska in 2019 (just enough time to establish residency for a Senate run). While she acknowledges that President Biden is, well, president, she also thinks there are still “unanswered questions.” Although Tshibaka was smart enough to scrub her social media before announcing her Senate candidacy, CNN reported that she’d used it to spread baseless conspiracies about voter fraud in the 2020 election.

As a Harvard Law School student, she wrote in support of conversion therapy for LGBTQ people and claimed that Christianity can help people “work through the process of coming out of homosexuality.” She’s since claimed that the article was an opposition piece assigned by her editors, and that she no longer holds those views (which sound like conflicting excuses, but whatever). In another Harvard Law article, she wrote that, as a conservative, she believes there’s “no wall of separation between church and state.”

In short, she faces accusations of fraud and an exaggerated origin story, the stringent qualifications for a modern Republican of the MAGA age.

Then there’s Murkowski, nearly the opposite in every way. She’s part of a political dynasty, holding a Senate seat vacated by her father. She’s anti-Trump, pro-choice, and has refused to join MAGA anti-CRT, trans-bashing, culture war rhetoric. According to Govtrack, she’s not only the most liberal Republican in the Senate but to the left of Manchin and Sinema. In addition to voting to impeach Trump, she voted against Justice Brett Kavanaugh’s Supreme Court confirmation, and in June was one of few Republicans to genuinely back some gun control measures. In many ways, she’s emblematic of a state that has traditionally refused to fall neatly within party lines: over half of Alaska’s voters are registered independents.

That hasn’t been good enough for state Republicans, who censured her for her vote to convict Trump at his impeachment trial.  “The party does not want Lisa Murkowski to be a Republican candidate,” said former state GOP boss Tuckerman Babcock (real name) at her censure in 2021. But Senate Minority Leader Mitch McConnell has backed Murkowski, spending millions through his PAC on Tshibaka attack ads.

Despite her loss, it’s likely that we won’t see the end of Tshibaka, who has been hinting all week that she’ll challenge the results in event of a loss.

While there’s no evidence that ranked-choice voting favors one party over the other, or that there was any indication of fraud, it’s likely that ranked-choice did help Murkowski win this election: she picked up about 70 percent of Democrats’ second-choice votes. According to an Alaska Survey Research poll, she enjoys the approval of 43 percent of Democrats, compared to 17 percent of Republicans. With numbers like that, it’s totally plausible that she’d have lost to Tshibaka in a traditional Republican primary. Most Alaskans aren’t registered Democrats or Republicans, and opinions on Murkowski tend to split down the middle.

Tshibaka’s loss, given that she’d have been one of the more extreme Republicans in the Senate, is a relief to some. It’s also  rebuke to Donald Trump, who went all-in to back Tshibaka and unseat a thorn in his side. Still, even though Murkowski will likely continue to be a common-sense voice on elections and abortion rights, that doesn’t mean she’s a winner for America as a whole. Besides having a sub-par record on labor rights, she’s an unabashed supporter of heavy resource extraction, mainly in the forms of fossil fuels and mining—including throwing her support behind oil drilling in the Arctic National Wildlife Refuge. So she’s not exactly good. But she’s less bad.