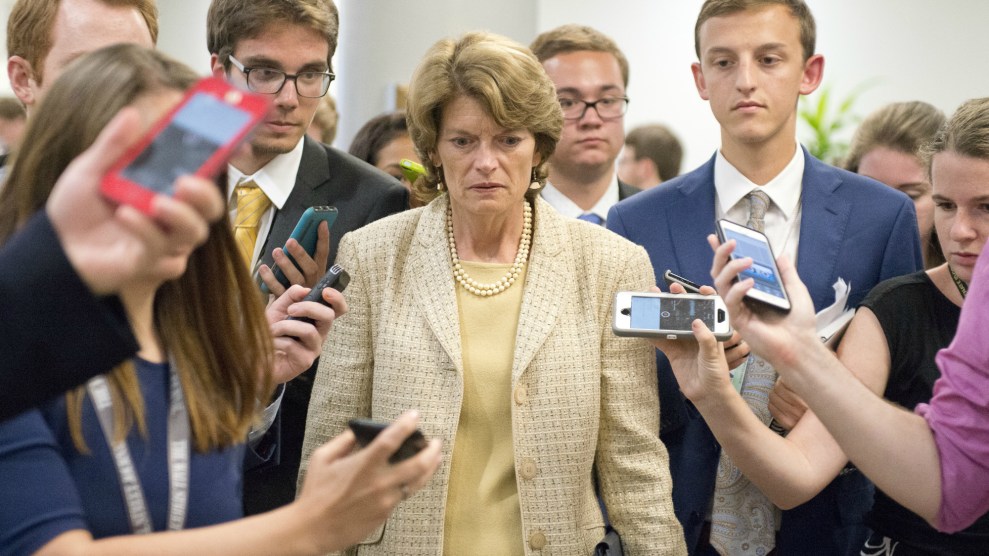 President Trump can’t contain his displeasure with Senator Lisa Murkowski (R-Alaska) over her health care vote, accusing her on Twitter of letting down “Republicans and our country.” His Secretary of the Interior has also reportedly called to tell her that her vote against the GOP’s revived attempt to repeal Obamacare will have repercussions for her state.

On Wednesday, Murkowski and Sen. Dan Sullivan (R-Alaska), who voted with the rest of the party on Tuesday, received phone calls from Interior Secretary Ryan Zinke, according Alaska Dispatch News. Though the details of the calls aren’t public, Sullivan described the “troubling message” he received from Zinke to the news outlet. “I fear that the strong economic growth, pro-energy, pro-mining, pro-jobs and personnel from Alaska who are part of those policies are going to stop,” Sullivan said. “I tried to push back on behalf of all Alaskans…We’re facing some difficult times and there’s a lot of enthusiasm for the policies that Secretary Zinke and the president have been talking about with regard to our economy. But the message was pretty clear.”

If Trump really wanted to take revenge against Alaska for Murkowski’s vote, the best way to go about it would be by becoming a Teddy Roosevelt conservationist Republican and declare drilling and mining off-limits on federal lands and waters. When we talk about Alaska’s priorities, near the top of the list is oil and gas drilling, a central part of the state’s economy and government, accounting for about one-third of its employment. Over the years Murkowski has clashed with environmentalists over off-shore oil permits, developing roads through protected wilderness areas, drilling in the Arctic National Wildlife Refuge and the National Petroleum Reserve-Alaska, along with mining in Pebble Mine—a gold and copper mine in the Bristol Bay watershed.

As chair of the Senate Energy and Natural Resources Committee, Murkowski also tends to use her position to influence Department of Interior and Energy appointments. At the time of Zinke’s confirmation, Murkowski said she was hopeful he would “mark the start of a new era for the Department of the Interior that is defined by greater cooperation.” She noted how that would benefit Alaska, “which has more at stake and is more deeply affected by this Department than any other part of our country.” A Thursday meeting to consider new Energy and Interior nominees has now been postponed; no reason was given.

Some of Trump’s green opponents note the irony of how in this case, his penchant for revenge could potentially make him do something good for the environment.

“If, by chance, the results here should be that Trump kills fossil fuel projects in Alaska and also fails to strip health insurance from millions of vulnerable Americans, I certainly wouldn’t be upset,” Seth Gladstone, a spokesperson for Food and Water Watch, said in an email.

The climate advocacy group 350.org’s communications director Jamie Henn added that if Murkowski’s vote against gutting the Affordable Care Act means less drilling and mining, the vote will be “twice-as good for public health. If Alaska had a booming clean energy economy, there’s nothing Trump could do besides maybe sending Zinke up there to tear some solar panels off rooftops in Anchorage. Instead, the state is being held hostage because of its antiquated economy that still depends on fossil fuel exports.”

Democrats immediately raised questions about the propriety of Zinke possibly using his office to engage in a form of “political blackmail.”

This will lead to Zinke being investigated by the Inspector General and maybe the Department of Justice https://t.co/obfryfJUph

Nancy DiPaolo, a spokesperson for Interior’s Inspector General office, told Mother Jones it currently “does not have any plans to investigate the matter.” She emailed again to add, “Of course, if we were to receive any official requests, we would assess any complaint at that time.”